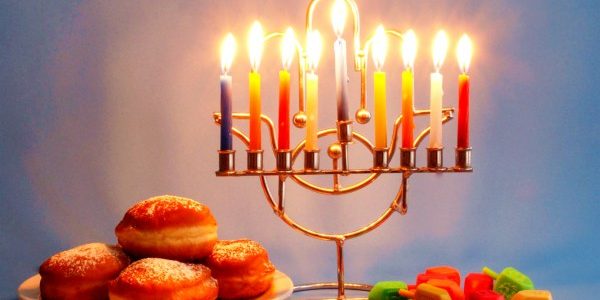 Lithuania is a country with roots in the Litvak (mitnagdic, Jewish Orthodox) tradition. Our community is the direct inheritor of more than 600 years of Jewish history and the successor to the traditions of the Vilna Gaon, and we keep our traditions.

When the Jewish museum chose the Gaon’s name for their title, we understood it as a sign of respect for mitnagdic tradition. Has someone proposed changing that name? Let’s honor our traditions during Hanukkah as well. Lighting a menorah in a city square is a Chabad tradition, and Litvaks do not encourage that sort of celebration of Hanukkah, instead, everyone is invited to Vilnius’s only working synagogue.

Electric lights are most often used in huge Hanukkah candelabra displays in central squares or other prominent areas of cities. Chabad reports this “tradition” began with the seventh Chabad rebbe, Rabbi Menachem Shneerson, who ordered these types of Hanukkah menorah displays in public spaces, the first having been set up in Philadelphia in 1974. Chabad Hassidim then began to carry out these sorts of campaigns around the world. These campaigns have not always and not everywhere met with support and approval. Besides different anti-Semitic attacks, there are on-going discussions even now, at least in the USA and other countries which adhere to the principle of the separation of church and state, which precludes displays of religious symbols in public spaces, a ban which is now and again in places applied to Christian symbols, and therefore should be applied to other religious symbols as well. Different municipalities, however, find a way around this ban, adopting decisions which, for example, state that neither Christmas trees nor gigantic menorahs erected in public spaces are religious. We could probably agree with that belief, having in mind these huge menorahs are not traditional in public spaces. All the more so since they employ electric lights rather than wax candles or oil. But the diverse politicians who participate in these lighting ceremonies likely participate viewing them as a cultural rather than religious holiday, seeking to demonstrate their tolerance towards ethnic minorities living in their countries.

For a number of years there has been a giant menorah set up in Vilnius at the initiative of Chabad, and politicians and diplomats like to attend the lighting ceremonies, thinking they have found an opportunity to express solidarity with the Jews of Lithuania, while the more ancient tradition of lighting the Hanukkah candles in private homes and at their entrances goes largely unnoticed. It is these lights which are supported to perform the role of testimony, the most important religious meaning: the lights should be lit at the entrance to the home or on window sills, so they can be seen from outside, as a testimony, according to the Talmudic sages. Although Chabad Hassidim are historically inseparable from the Jews of Lithuania (their communities in Vilnius date back to the time of the Russian Empire), they do not represent all Jews of Lithuania, and especially not those who consider themselves misnagdim, often referred to simply as Litvaks. Perhaps the city of Vilnius this year could look for some sort of Solomonic solution which wouldn’t preclude the Litvak community and would respect their traditions. Or simply point out that the erection of gigantic menorahs is not automatically perceived as a universal Jewish tradition.