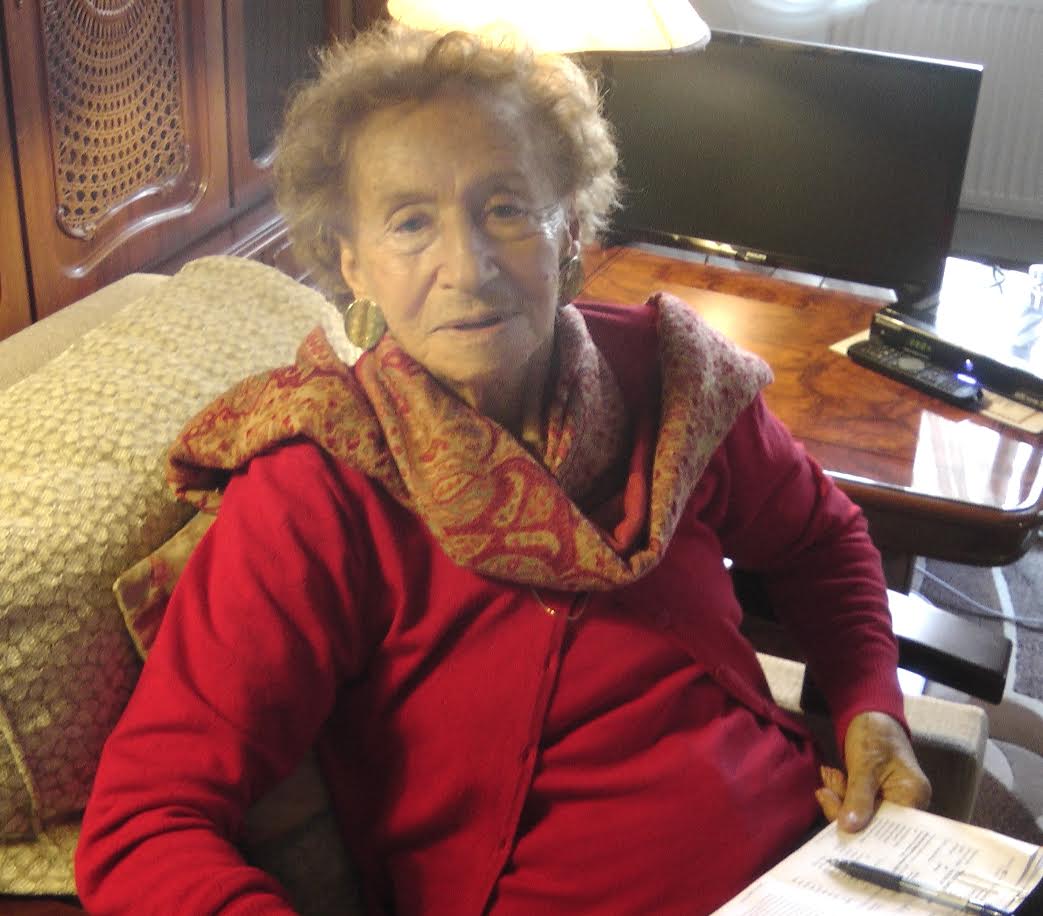 It’s important for people to hear the sound of Yiddish. There are many interesting sayings. My grandma used to say “one butt can’t be at two fairs at once.” Takhrikhim is a linen cloth used as a burial shroud. I remember I had this rich uncle who was stingy. Something needed to be purchased for the bathtub, but he’s not buying it. I said to him: “Uncle, takhrikhim have no pockets. And what do we keep in our pockets? Money. When they are burying you, you can’t take your money with you.” After I said that, uncle went and bought everything right away. Incidentally, pockets in Yiddish are “keshenes,” almost the same as Lithuanian “kišenės.”

On Sunday I thought I’d go on Monday, but I put it off, and I didn’t go on Tuesday, either, because there was market on Wednesday. And why should I go on Thursday, since Friday is the start of Sabbath?

When the mouse is full, the flour is bitter.

No man scratches his head without reason: either he has worries, or lice.

Not everything can be ideal in a single person.

As are the times, so are the people.

When God passed out intelligence, He was sleeping.

To promise and to love cost no money.

If you wag your finger at a pig, he’ll want your whole arm.

There’s as much truth in that as there is light in a chimney.

He’s as much an expert as a cat understands yeast.

I’ll give you the soft part of the rock (you get nothing).

Small children do not allow you to sleep, but grown-ups–you’ll keep your self awake because of them.

An excerpt from an interview with Dita Šperling, beginning with her childhood in Kaunas before World War II when the provisional Lithuanian capital had a large Jewish population:

I remember, I’m walking down the street and hear people speaking Jewish (that’s what everyone called Yiddish), there was a saying in almost every sentence. It is such a rich language, I go home, I want to write it down, but I don’t remember. The language is very interesting.

My parents didn’t speak Yiddish. My grandparents spoke it to each other, but didn’t speak much with the grandchildren. You would hear many languages in the Kaunas Old Town before the war, Yiddish, Lithuanian, Russian, Polish. We always heard the Jewish language. And I remembered the words, as a child.

A few years ago I began to write down sayings out of personal interest. I offered the sayings to the YIVO institute in New York, although, of course, YIVO has many such sayings, and the important thing for them was for me to read them in Litvak Yiddish, which is called the classical Yiddish language. A few years ago I wasn’t able to do that because there was no time. I spoke with the chairwoman of the Lithuanian Jewish Community and she proposed recording them in Vilnius, so the recording would remain in Vilnius and we would send it to YIVO in New York.

What do you remember today, what was the Jewish legacy?

In 1939 I was a high school student, I was 17 and I attended the Aušra Girls [Gymnasium] in Kaunas, one of the most famous and best gymnasia in Lithuania. I was the only Jewish girl in my grade. When Poland occupied Vilnius from 1920 to 1939, contact with Vilnius was lost until 1939. As soon as Vilnius was returned to Lithuania, all of the gymansium’s classes, one after the other, organized field trips from Kaunas to Vilnius. We 17-year-old girls, Lithuanian girls and one Jewish girl, went with the entire grade to Vilnius. I still remember we lived in a dormitory in Vilnius where there are tennis courts now. We visited various sites, I remember Vileišis Palace and just guess where our teacher took all the Lithuanian girls. To the Great Synagogue, because it was world-famous. The extraordinary impression has remained with me until now. I wonder if anyone is still alive who visited that synagogue in 1939. I have to say this was Vilnius, not Kaunas, where we didn’t see such beauty. The impression has remained with me my whole life: full of beggars, invalids with wooden legs, a horrible impression, we never saw that in Kaunas. We went around the synagogue and descended, where there was this very large empty space where Jews prayed. As with others in Europe, the Vilnius synagogue wasn’t supposed to be taller than surrounding buildings, not as some say now that it wasn’t supposed to be taller than churches. Where have you seen a synagogue as tall as a church? Go ahead, build your synagogues, but not higher than the buildings. Now I hear talk they want to rebuild something there, but I saw its ruins after the war. It’s very sad, I remember I flew from Moscow with a young architect who said, “Yes, we could have rebuilt it, but we decided to tear it down.” Just imagine what it would be like in Vilnius if it had been rebuilt!

I remember, after the war you could still hear Yiddish being spoken on central Vilniaus street. Now there’s no one left with whom to speak. That’s why I must read the sayings for a recording, because this language is dying, but it is very interesting. Is it possible to revive it? No, no one will revive it. A University of Jerusalem professor gave me a book people use to learn Yiddish, but of course there can be no future.

Did you read Yiddish newspapers when you were young?

I left Lithuania in 1972 to live in Israel, I only came back in 1991. It was only possible at that time. I went to Kaunas. I immediately went to the Old Town with my memories from youth. I see before my eyes a steamboat arriving with villagers who were dressed in furs with a strange smell. The Jesuit gymnasium was there. The Aušra Girls Gymnasium was across the street from the presidential palace. There was shop next to shop next to shop. You could buy anything there, country people bought material and nails. Porters stood on street corners holding thick ropes in their hands. They were all Jews, not tall, hunched over, carrying cargo on their shoulders. I was always surprised at how they carried the largest packages. There weren’t automobiles then. Sometimes [cart] drivers carried cargo, but it had to be brought inside every shop. Children stood there selling newspapers, shouting: “Lietuvoas aidas,” “Yiddishe shtime,” “Hantige nais.” It’s all there before me as if it were still going on. These newspapers had two editors, one was called the “zits redaktor.” Zits meant sitting in prison. There was censorship during the Smetona period. I often saw blank lines in the Jewish newspapers, they had to pay a fine for that, but the newspaper never had money. The editors could choose to pay the fine or go to jail. The zits redaktor was the person who often spent two days in jail.

Now I walked around Kaunas, went to where my grandfather lived on Prezidento street, my other grandfather on the corner of Mapu and Vilniaus streets. I went to my gymnasium and without thinking about it entered through the courtyard instead of the front doors, and went down into the cloak room. It was summer vacation, empty, I didn’t run into anyone. Suddenly in the cloak roam I smelled the smell of frozen coats which we girls used to pile one on top of another when we ran back inside, the cloak room was not heated. I left, sat on a bench and after remembering, thought: Kaunas is not mine anymore. It’s very beautiful, new, rebuilt, with small courtyards. The castle, the church and the old town hall have been restored with great love, but the soul is gone. Kaunas is no longer mine. It’s a tourist city.

Mm, all the shop keepers were Jewish. There were bagels and platskes [a fried potato pancake dish similar to latkes], which no one makes anymore, on the way to school.

Mama wasn’t at home, she worked as a dentist in Vilkija. I used to eat bagels with butter. Grandma ate non-kosher food, so when I visited her, I remember, I was a high school student, very energetic, I had to hurry to get everything done: to do my homework, I was also learning how to sew, I used to go to grandma’s, my father’s mother, and on the way I went shopping at a food store, where they had this delicious ham called palendvitsa. I used to tell grandmother: “Give me a plate, I will eat,” and grandmother used to say: “Leave that khaza on paper, it’s pork, after all.” I can still hear her saying that until now.

Why did you choose to go to a Lithuanian gymnasium?

I ask myself that question. You know, I didn’t choose, my parents chose for me. My brother and I went to a German gymnasium. From childhood we had a German nanny so I spoke German very well. When Hitler came to power in 1933, all the Jews were protesting and took their children [out of the school], and set up a new gymnasium themselves, where A. Venclova and other well-known people taught. My parents sent my brother to this gymnasium, so why did they send me to a Lithuanian one? I can’t say why. We had a wonderful childhood. My grandfather had a summer cottage in Kačerginė since 1904 made of large logs, five rooms, right next to the Nemunas River. I remember, the Nemunas used to carry off his fence every second winter. One of my grandfathers repaired typewriters, they were a novelty. Later he had his own shop, later he repaired typewriters in the Government. My father was a very interesting person, a scholar, with a degree in economics, a good mathematician and knew several languages. I remember he used to meet with university professors at the Monika Café and they worked on problems with my father. Mother was a dentist, and since there were so many dentists in Kaunas, she didn’t find work there, and had to work in Vilkija.

For more, see our earlier item from two years ago, an interview with Dita Šperling about her life and experiences in the Kaunas ghetto and Stutthof concentration camp, here.