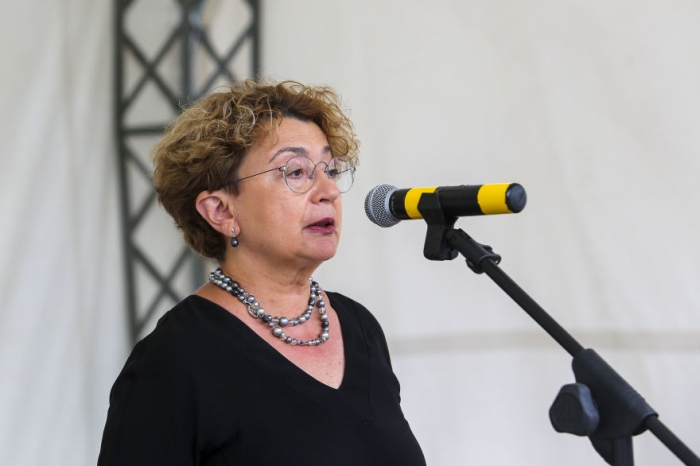 More than 2,600 and perhaps as many as 4,000 people attended a rally and walked the route along which 2,000 Jews were marched to their deaths 75 years ago in the sleepy Lithuanian town of Molėtai Monday. The population of Molėtai was roughly 6,400 when last counted in 2011.

The town center and surrounding streets were filled with local residents and people from around the world, including Holocaust survivors and their descendants. Many Lithuanians brought their children and there were people from Estonia and a number of Lithuanian officials in the crowd. One group of young people waved Polish flags–the Polish Armia Krajowa operated in the area in 1944. A small group of Lithuanian boy and girl scouts attended, while another small group carried a Lithuanian flag, and others sported Israeli flags. A monk in black robes stood by the stage, on the other side of which there was a long line of people holding posters with names, faces and descriptions. A central area contained about twenty folding chairs for elderly and distinguished guests, including Vytautas Landsbergis and Holocaust survivor Irena Veisaitė. Lithuanian MP Emanuelis Zingeris, a Litvak, also attended. The priest Tomas Šernas was also there, as was Lithuanian Jewish partisan Fania Brancovskaja. Other distinguished guests included Conservative Party and parliamentary opposition leader Andrius Kubilius, Lithuanian defense minister Juozas Olekas and deputy foreign minister Mantvydas Bekešius.

Mayor of Molėtai Stasys Žvinys, local organizers, a Holocaust survivor, Lithuanian Jewish Community chairwoman Faina Kukliansky and Israeli ambassador to Lithuania Amir Maimon briefly addressed the audience before the procession. Pianist Leonas (Liovas) Kaplanas, whose mother was from Molėtai, spoke, a synchronous translation raced across a reader board above covered stage area. Similar running translations in English and Russian were provided for other speakers but some of the texts appeared to have been mixed up. Kaplanas said it was a shame for Lithuania to name streets and public spaces after Holocaust perpetrators, and said the names of those who rescued Jews during the Holocaust should receive that kind of honor instead. Tzvi Kritzer, a relative of murdered Jews from Molėtai, spoke in Russian. Kritzer, who is based in Israel, and Kaplanas founded the Malat Memory Association to commemorate the Holocaust victims of Molėtai. Malat and Maliat are Yiddish names for the same town.

Lithuanian Jewish Community chairwoman Faina Kukliansky spoke in Lithuanian first and then said the same speech in English. She pointed to Holocaust Irena Veisaitė in the first row of seats and quoted her as saying the event was a sort of tipping-point in Lithuanian Holocaust awareness because of the large number of people who showed up. She also pointed out the mass murder of the Jews in Molėtai on August 29, 1941, wasn’t unique, and there are at least 200 other places in Lithuania were the same crime was committed, although specific details might have varied.

Israel’s ambassador to Lithuania Amir Maimon lent a very positive note to the gathering, and said both groups–Lithuanians and Jews–were together in Molėtai before the Holocaust, and were now again together. As he spoke in Israeli-accented English, the skies threatened to open up and large, hard drops of cold rain began to fall as a late summer squall threatened to erupt, but the threat departed as quickly as it had appeared. Several local young men flew mobile-telephone-controlled drones over and around the audience during the entire event, and the drones continued to buzz the marchers all the way to the procession’s destination.

The writer and Lithuanian Jewish intellectual Arkady Vinokur served as master-of-ceremonies introducing the speakers. At the end of the speeches he instructed survivors, relatives of victims and those wearing yellow stars of David to go to the front of the procession heading to his right down the main street and down a hill to the actual killing site, where a memorial was to be unveiled.

Once the crowd exited the town center and wound down the hill near the lake and back up and around to the mass murder site, it was apparent there were well over 2,500 people participating. The marchers included survivors from around the world, Lithuanian politicians concerned with Holocaust issues, Lithuanian Jews, members of the press, Catholic and Protestant clergy, local residents and concerned people from around Lithuania and Europe. Many had children with them. Lithuanian author Rūta Vanagaitė was there with Simon Wiesenthal Center Jerusalem director and director for Eastern Europe Efraim Zuroff. Vanagaitė also said she thought a tipping point had been reached, a breakthrough in Lithuanian consciousness, and noted the presence of both the mayor and Catholic clergy as well as the large number of participants. Litvak writer Sergejus Kanovičius escorted a guest as well.

Just as the critical mass of participants was apparent from the street, so too was it apparent most of the rest of the town was empty, meaning either the local population had holed up in their houses, or a good number of them had turned out to march, or both, given the town’s population is only about 6,400 as of 2011 living in an area of about 4 square kilometers. There were extremely few spectators, only a few teenage girls near the town center, and then a few more people closer to the killing site, and several older men peered out from local cafes along the route.

After descending a hill down to the town lake–really just a wide part of the Siesartis River–and climbing another, the column of people turned right onto a semi-paved road leading past a factory. On the left hand side there was a sort of park with boxwoods dividing it into three sections converging on a depression, forming a kind of amphitheater, centered on the pit where 2,000 Jews of Molėtai were shot in relays 75 years ago. The first visible object was what seemed to be a large black crane looming over the central area, but which turned out to be a television camera boom. As the quiet procession entered the area, many of the younger children began to cry and were carried out by their parents. After everyone had more or less found a place to sit or stand, some of the children began to play hide-and-seek as their mothers and grandmothers chided them this was neither the place nor the time to play games. A small table was set up at the entrance to the memorial park where young Lithuanians poured water into plastic cups for those who were thirsty. A bus relayed the elderly, infirm, disabled and just plain tired people from the town center.

The ceremony itself was subdued. A tarp was removed from a large black stone slab presumably inscribed with a message and the names of those murdered. Wreaths were laid, including in the Lithuanian president’s name. She didn’t attend the ceremony, but immediately following the event a radio station reported she had. Molėtai Stasys Žvinys also laid a wreath at the memorial. Lithuanian Jewish Community Kalev Krelin was introduced as the chief rabbi of Lithuania and said a short prayer. Every time he said “omen” it was repeated by voices interspersed in the crowd. Choral Synagogue cantor Shmuel Yatom did kaddish. This was followed by Hatikvah, the Israeli national anthem, played on violin and again accompanied by select voices in the crowd. Some laid small stones at the memorial. The group walked the same path back to the town center and several buses ferried people back to Vilnius, while others retrieved their automobiles parked crowding every parking space and even the vacant lots in the small town.

First photo courtesy of www.15min.lt, all others by Dovilė Abromavičiūtė: