Vilnius has only one working synagogue [excluding Chabad Lubavitch House], the Choral Synagogue on Pylimo street. How are prayer services conducted there?

Prayer services are held three times daily. There are sufficient numbers of those who come to pray. Judaism is complicated, people come to prayer in the morning, afternoon and evening. Life is structured by coming and going to synagogue. They only come once during Sabbath. There are a lot of people in attendance during the summer and famous rabbis come, the followers of the Vilna Gaon. People are frequently proud of their Lithuanian roots, because being Litvak means the continuation of the Gaon’s school, meaning that their parents or ancestors came from the Lithuanian Grand Duchy, many of them from [the smaller ethnically-defined nation-state of] Lithuania. They dedicate an entire day to prayer, then travel on to Volozhin, where Chaim of Volozhin [1749-1821], a disciple of the Vilna Gaon, taught the Gaon’s method of textual analysis at the yehsiva he [Chaim] established especially for that purpose. During the Jewish holy days the synagogue is packed, at least before the pandemic, and it’s not just Jews who come, many Lithuanian guests do as well. Ambassadors from many countries resident in Vilnius also participate. 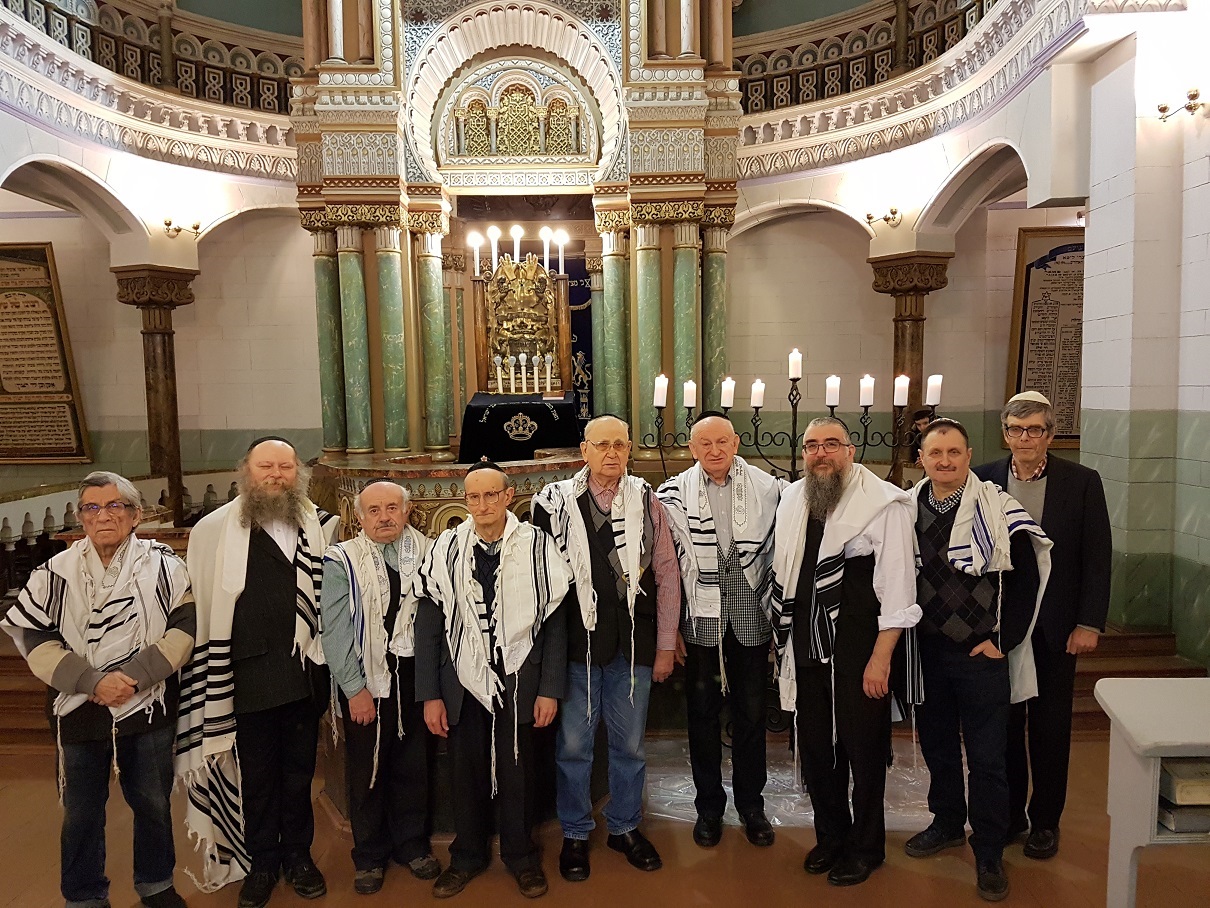 Members of the minyan with Simas Levinas at the Choral Synagogue in Vilnius.

Simas, you were born in Šiauliai after the war. Please tell us what you remember of Jewish life then.

Šiauliai was a strange city in the 1950s. It was the Soviet era, illegal “synagogues” operated in apartments. Almost all of the city’s Jews were men who survived the Holocaust and fighting at the front, and they used to gather to pray. During World War II Jews were part of the [Soviet] Lithuanian 16th Riflemen’s Division, and initially they spoke Yiddish and Lithuanian, but didn’t know Russian, and that made their life at the front difficult because they didn’t understand orders. After some time many Russians joined the division and they taught the others Russian.

It’s not really clear whether the need was greater to speak their native Yiddish out of religiosity or ethnic solidarity. Maybe it was to better remember the horrific experiences of the Holocaust.

Or maybe it was an instinctual therapeutic attempt to heal the wounds of their souls. Everyone wanted to enjoy life, the life which had been granted them miraculously by the lottery of fate.

The city’s Jews supported one another and were ready to extend help to everyone who needed it. This was truly not a formal community. Its leader became… the family who had a larger apartment. At their home we held all the traditional and Saturday Sabbath meetings. I remember these took place right up to the restoration of Lithuanian independence.

What was your childhood like? What did your parents tell you, because you often hear Jews say their parents were reluctant to talk about or didn’t talk at all about the Holocaust and the murder of members of their family?

They called the children of the city žydukai. I remember Hanukkah was an especially eagerly awaited holiday. We got Hanukkah gelt, ponchikes which were doughnuts and latkes. Parents used to carve dreydlakh out of wood. Some people have managed to preserve these family heirlooms–a miracle! We used to light the candles on the pre-war hanukiyas.

Now I understand that our parents did everything they could that we wouldn’t know the stories of their experiences. Everyone chipped in and prepared the holidays for us, the miracles of Hanukkah.

And today most of the Jews who come from Šiauliai know and speak Yiddish. Those of us fun Shavl who are scattered by fate around the world remain in communication.

Many parents who survived the Holocaust and who saw the change in the behavior of their neighbors didn’t want to teach their children Yiddish, and this contributed even more to the downfall of Yiddish. This was the language, after all, in which the history of Lithuanian Jews was written, so many books, poetry–this is a treasury which will be difficult to discover and understand if you don’t know the language.

Were Jews able to enter and freely pray at the synagogue in Vilnius during the Soviet period?

The synagogue was returned to the Jewish community after the war in 1947. This was totally incomprehensible, because the famous Great Synagogue, although it had sustained damage and was shot up, was still standing and could have been repaired, but it was instead destroyed in 1956. Jews freely congregated at the synagogue after the war, knowing it had been returned to them, and believed they would enjoy the same freedom as they had before the war. They were quickly disabused of this idea because they began inviting young members of the congregation to partkoms [Party commissions] to explain to them that Soviet Jews didn’t go to synagogue… With a bitter experience of life, Jews soon understood… At that time seven percent of the Lithuanian Jewish community had been deported, because the majority of them were affluent. The majority of those who attended synagogue were elderly Jews, they knew all the prayers, they had read the Torah.

Soon a matzo-making machine appeared in the synagogue, where it still stands as a special legacy.

When the Lithuanian rebirth began you were one of the most active in the restoration of the Lithuanian Jewish community, you were the first principal of the Jewish school in Vilnius and you were the intellectual leader of the school, and you always used to speak out and explain to the public the necessity of having this kind of school. Now that this school–the Sholem Aleichem ORT Gymansium–has become one of the top-rated in Lithuania, no one questions the need for it. Was it a simple matter to establish the school? How did it take place?

It was a long process. The national rebirth inspired us, Jews also used to go to the bonfires, next to the parliament, and I had the honor of entering the protected parliament and I saw the security who slept in shifts with their firearms. At the time I thought: how do they imagine themselves defending the parliament with those guns? They were real heroes, full of enthusiasm. Their guns were antiques, and they were doomed to die for Lithuania. I see that image right now, it’s right there before my eyes. The spirit of rebirth wasn’t limited to Lithuanians, it was everyone’s. It kindled the desire to restore the Jewish school.

Most Jews didn’t know Hebrew or Yiddish, hadn’t read Jewish history and didn’t know their own traditions. They became Jews because that was what was written in their passports. What sort of idea could rally people together? School. The man who recreated the Lithuanian Jewish Makabi Athletics Club in 1989, Simonas Finkelšteinas, inspired us to establish the school. I was already an experienced teacher then, I worked as the principal of a school in Panevėžys and I had written my doctoral dissertation at Vilnius University.

The Education Department of the City of Vilnius reacted rather favorably to our desire to establish a Jewish school with instruction in the Lithuanian language. Initially Russian school principal Larrisa Yalovaya provided premises for us out of a sense of goodwill. There had to be a transitional period, bringing parents together so they’d visit the school, meet the teachers, sit down themselves for a class and get to know the learning and teaching culture. We had to effect a coup in people’s consciousness. People just turn their child over to the hands of strangers. That took two years. We put on good events and brief lessons. Parents got used to the idea of the school, met the teachers and learned Hebrew and Yiddish.

I recall all the extraordinary innovation and enthusiasm which Frida Zimnienė inspired. She drew in everyone to come and attend the Jewish school. She used to ask: “Are you a Jew or not? If you’re a Jew, why aren’t you attending?”

Education minister and academic and professor Henrikas Zabulis helped me very much. We received our premises. After two years of preparation we opened our first grade in Lithuanian. The first teacher at the primary school was my wife.

Miša Jokubas and I–he was my assistant then and the mathematics teacher–worked around the clock. Children studied during the day and in the evening the parents came to learn.

That was the beginning.

In 1991 Simas Levinas travelled to Israel and the well-known Jewish organization the Joint Distribution Committee appointed him to help re-establish Jewish communities in the Far East in Russia.

At that time Miša Jokubas became the principal of the Sholem Aleichem Jewish School and remained so for many years. Thirty years have passed since then. The school has become one of the best in Vilnius with many wanting to attend. Both Jews and Lithuanians, among others, attend the school. Dr. Ruth Reches took over as principal officially in 2020 after serving as acting principal for some time.