Is ethnicity important in Lithuania today? Here’s why I ask. 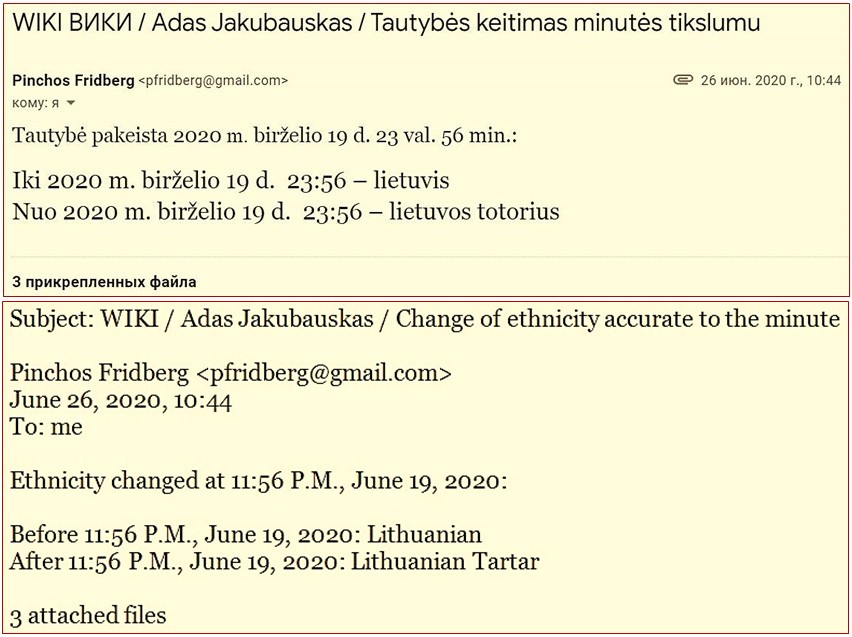 In Place of a Foreword

I follow almost all material in the Lithuanian media on the topic of the Holocaust in Lithuania. I make copies of the most interesting, and to avoid misquotes I save it. I have over ten thousand such items saved.

Below I present some “unique” screen captures which would have remained in my archive alone if the Lithuanian Jewish Community hadn’t published the following article:

A report by Jūratė Skėrytė appeared on the Lithuanian national radio and television website on June 16, 2020:

I have to admit I’d never heard of Jakubauskas before. Discovering that “Since 2003 he has been the chairman of the Union of the Lithuanian Tartar Community and since 2015 the deputy secretary of the World Congress of Crimean Tartars,” I had an irresistible urge to learn more of his biography.

I went to wikipedia and, as is my custom, took screen captures of the page (I dare think I am the only one who possesses this one): 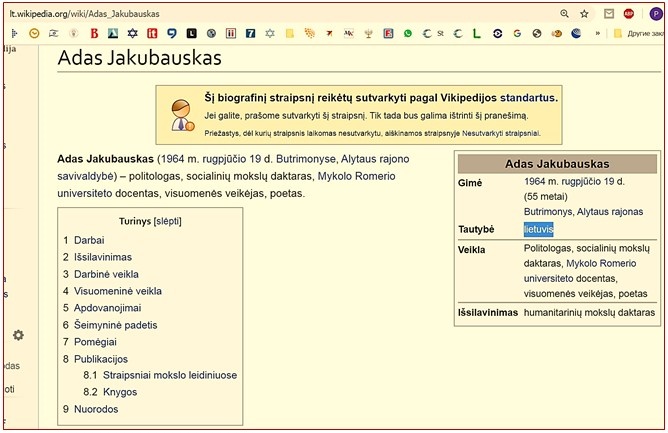 Please note, his ethnicity is indicated as Lithuanian.

Adas Jakubauskas has nothing to do with this entry! Anybody can write whatever pops into their head on wikipedia.

I agree! But no one will convince me Adas Jakubauskas hadn’t leven ooked at the wikipedia page about him and never saw his indicated ethnicity since 2012, when the entry for him was created.

On June 25 the Lithuanian parliament appointed Mr. Jakubauskas general director of the Center for the Study of the Genocide and Resistance of Residents of Lithuania (Genocide Center). I went back to wikipedia and, as is my wont, I took a screen capture of the entry for him. 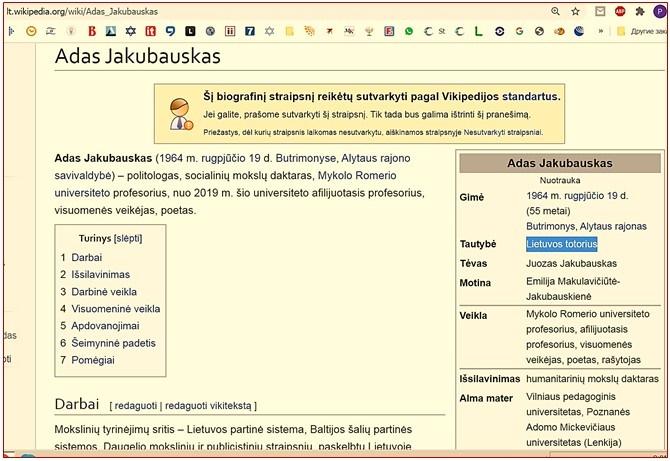 As we see, Jakubauskas’s ethnicity has changed: he has become a Lithuanian Tartar.

It remains to determine at what exact time this metamorphosis took place.

Fortunately, wikipedia is set up in such a way that no one is able to erase evidence of their edits:

Before your eyes is a screen capture of the headline of an article posted at the website krima.suspilne.media:

Translation: Crimean Tartar Becomes Head of Center for the Study of the Genocide and Resistance of Residents of Lithuania

I anticipate the following question:

What does Mr. Jakubauskas have to do with this article? He might not even have seen it!

In place of an answer, I will quote from the article itself:

“Adas Jakubauskas himself reported this to QHA.”

Note: Suspilne Krim is the official website of the UA KRYM television channel. They broadcast all Ukrainian satellite channels in the Ukrainian, Russian and Crimean Tartar languages.

I repeat the question with which I began this article:

Does ethnicity matter in Lithuania today?