The Lithuanian Post Office will issue a special stamp commemorating the 300th anniversary of the birth of the Vilna Gaon on Friday, June 5. The nominal value of the stamp is 81 euro cents, meaning it will be valid for sending letters abroad.

The stamps have a print-run of 20,000. The issue will also feature a first-day release envelope for sale. Post-marking stamps on the first day of issuance will take place at the Central Post Office in Vilnius, located at Gedimino prospect no. 7, on Friday. 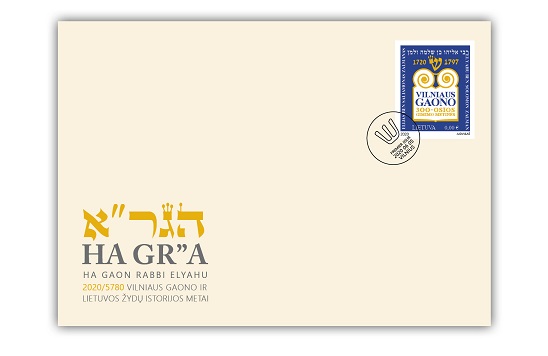 The letter shin (ש) appears near the top of the postage stamp with a stylized crown atop the final branch symbolizing the spiritual authority of the Vilna Gaon. According the gematria the value of this letter is 300, as Lithuania celebrates the 300th anniversary of the birth of the Gaon this year. Underneath is a stylized Torah scroll along with an open book, an allusion to the Decalogue, the two slabs of stone Moses received on Sinai inscribed by God with His Commandments, and at the same time representing the tradition of a pair of windows on the façade of the synagogue. The coloring of the symbols and characters and the graphic design was based on the stylization of the decor of ancient Jewish writings.