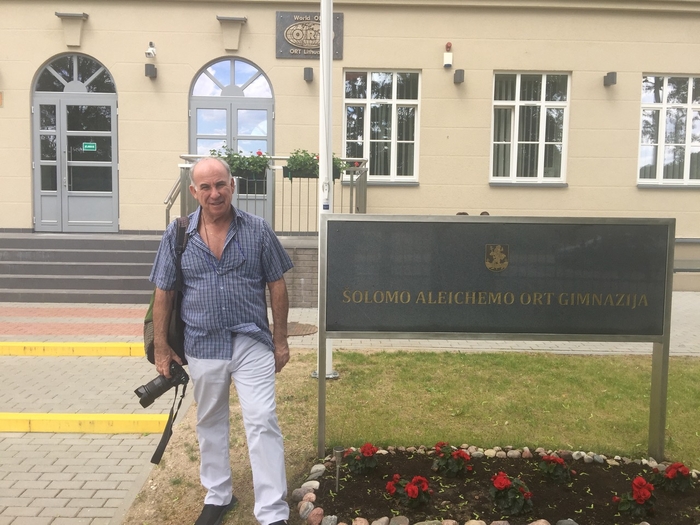 The ORT Sholem Aleichem Gymnasium in Vilnius had a special guest Monday. Eli Rabinowitz from Perth, originally Cape Town, tries to make it to Lithuania every summer, and says he’s been here seven times now in the last six years. He comes from a long line of Litvaks in South Africa and has been quietly going to schools around the world to get them to teach their students the Partisan Song.

For those who don’t know what that means, there is a world-famous song which came out of the Vilnius ghetto, one treated as a sort of national anthem in Israel, where people stand at attention when it is sung. Most people in Vilnius and Lithuania today have never heard it, but over the decades before the internet came along, the song went viral in slow motion.

It goes by a number of names—Vilna Partisan Song, Mir Zaynen Do, Zog Nit Keynmol—but as often as not is just referred to as the Partisan Hymn. Hymn is probably a mistranslation into English of the cognate word in Russian which usually means national anthem rather than religious music, but Eli says at least one congregation in London actually includes the Yiddish song in their Yom haShoah, Holocaust Day, liturgy.

His project is very simple: to introduce new generations of Jews and non-Jews to the song and the poem behind it to kindle interest in the Holocaust and in Yiddish language.

“These were kids, they were 20 or so, not much older than you, you’re around 15,” Rabinowitz told an impromptu meeting of students involved in the project at Sholem Aleichem school Monday.

“This is your song, it comes from Vilna, and you need to own it,” he told the young people and teachers there.

Sholem Aleichem is an ORT school and the ORT has given their official seal of approval to Rabinowitz’s project, although he pays for everything out of his own pocket and calls it a labor of love. Both ORT schools and other schools, Jewish and non-Jewish, in Australia, South Africa, the United States, Moldova, Israel and elsewhere have instituted the project to different degrees, usually meaning teaching a student choir the words in Yiddish and often in their local language, with some “tele-bridges” between schools in different countries and on different continents during which classrooms and singers link up and perform for each other.

Eli Rabinowitz encourages the singing of translations of the song in Hebrew, English, Lithuanian and other languages, and he’s been collecting versions of the song, mainly from youtube he says, including an ambient heavy metal version, a folky Irish variation and a Japanese version which sounds even more folk than the Irish. The song is the voice of physical and spiritual resistance to state-sponsored violence and a number of activist organizations have latched onto it for that reason as well, with some fairly bad renditions they do. Then there are spooky performance-art presentations with electronic voices of the dead.

Eli’s also in contact with a survivor who knew Hirsh Glik, the author of the poem, resident in Australia now.

“Their versions don’t exactly coincide,” he said about that testimony and what Rachel Margolis, an old friend of mine, told me, as we walk through the former ghetto and I show him the spot Rachel said Hirsh read her the poem that cold winter evening and she began hearing the melody of a Soviet film between the stanzas, the melody which the Partisan Song is known for. Eli has tracked down that original composer and the name of the film and includes that along with vast amounts of other information on his website/blog, www.elirab.me

Now he’s trying to draw up ready-made lessons plans and a curriculum so teachers can tteach the song as literature and history focusing on the poem, but as he explains it in his South African English accent modulated by decades of life in Australia, the methodology is the boring part, and getting the students involved and engaged is the real point here. “Maybe we should have competitions for the best performance,” he says, and we discuss how students themselves might make better and more interesting videos than any now floating around the internet. “It’s all about going viral now, isn’t it?” he asks rhetorically. Of course the Partisan Song went viral, in slow motion, decades ago, from a poem and song by kids in the Vilnius ghetto, to Robeson’s shocking rendition in Moscow, to Israel and the 1980s documentary Partisans of Vilna to today.

As so often happens, it’s not really about us modernizing as it is about the internet catching up to what’s already been accomplished, done, thought, said and sung. So is there anything new under the sun for the partisan hymn? To paraphrase the James Bond film, never say never again, again.