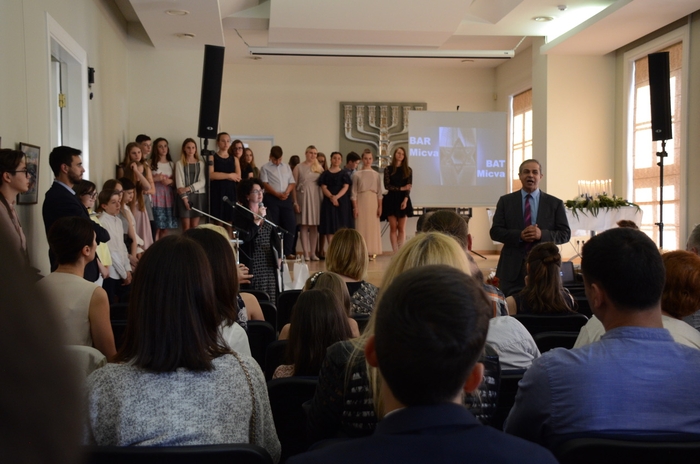 As the school year comes to an end and summer vacation begins, the ORT Sholem Aleichem Gymnasium held their annual combined bar and bat mitzvah ceremony Monday at the Choral Synagogue and the Lithuanian Jewish Community.

Parents and children arrived in their finest attire for the symbolic coming-of-age service which was conducted in Russian and Hebrew. Proud parents watched their boys and girls of different ages receiving Rabbi Samson Izakson’s blessing as they stood under the hoopa or canopy, praents took pictures and the audience rained candies down on the hoopa as the service concluded. Sholem Aleichem school principal Miša Jakobas delivered a moving address to his students in Russian. The service ended with children passing by the Torah scroll but no readings by boys or girls.

The party then moved to the third floor of the Lithuanian Jewish Community where the children or young adults had a candle-lighting ceremony to honor their parents, school, homeland, Israel and fallen Israeli soldiers. The festivities here were in Lithuanian and Hebrew. Israeli ambassador Amir Maimon spoke in a very genuine manner, translated to Lithuanian by Sholem Aleichem Hebrew teacher Ruth Reches, and recounted the parable of rabbi asked to repeat the whole of the law while standing on one foot. The young people performed songs, dance and did short skits in Lithuanian based on the writings of the author Sholem Aleichem and other Yiddish writers. After the young people were presented token gifts from the Lithuanian Jewish Community, the party moved into the foyer where there was abundant snacks, juice, coffee, wine and water. A series of artworks by students made especially for the occasion lined a long table as people helped themselves to hors d’oeuvres and waiters and waitresses circulated through the crowd with plates laden with food.