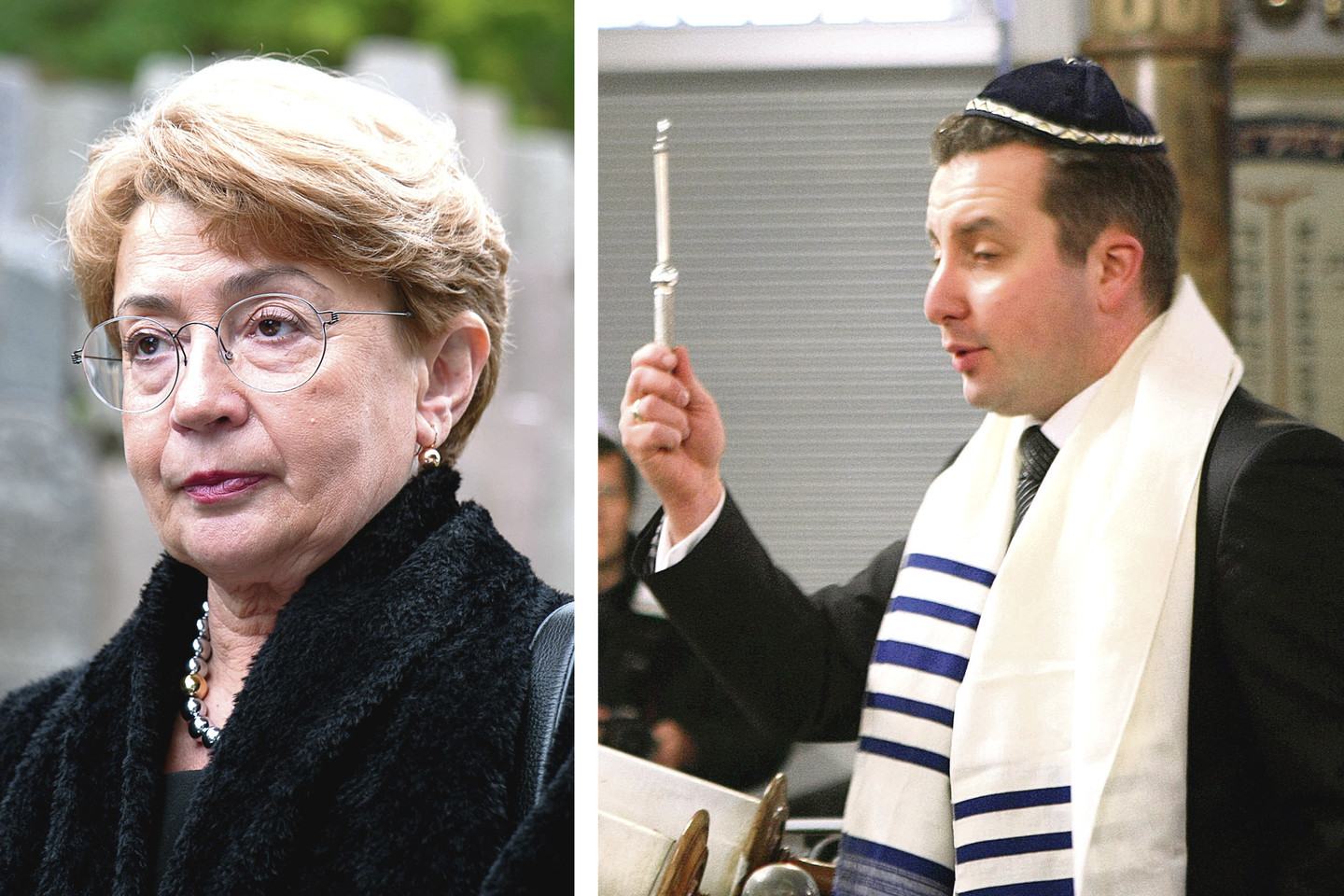 Is this an insurgency against the current leadership of the community, or also against dialogue with the Lithuanian state? This question needs to be asked because of the growing conflict among Lithuanian Jews.

Incidentally, one of Gurevičius’s main supporters is US Jewish activist Dovid Katz, who constantly accuses the Lithuanian state of anti-Semitic policies.

The night before last VJC elections for chairman were held where Simonas Gurevičius won by a large margin. Several hundred community members voted for him.

But Kukliansky, who went to the conference, reiterated there the position stated earlier that these elections were out of order.

And in just a few days, it appears, the LJC leadership elections are to be held, with no less intrigue.

Kukliansky speculated the tension in the community could be the result of monies from the so-called Goodwill Foundation allocated to compensate for Lithuanian Jewish property seized during the Holocaust, as well dissatisfaction by certain individuals over the expanding Lithuanian-Jewish dialogue.

The atmosphere among the ranks of the LJC is such that even Israel’s ambassador to Lithuania, Amir Maimon, called for unity within the community.

Lietuvos rytas asked Faina Kukliansky: Does all the noise indicate real disagreements? What is happening, in your opinion?

Elections (laughs). And nothing more. If you can’t begin an election in the usual way, you do it by shouting and hurling accusations, hoping to attract attention and approval.

Everything began about a month or a month and a half ago, when Gurevičius began collecting people and began accusing me of not intending to hold new VJC elections, or that I was intending to postpone them for as long as possible.

But, after all, the VJC is an organization which exists on paper, in the sense that the activities of this community and that of the LJC is exactly the same. There has been consideration for a long time now on whether the VJC should be merged with the LJC, but no decision is ever made. You see, the VJC is an association of real people and the LJC is an association of corporate entities.

So perhaps someone might have had the impression I wasn’t intending to hold separate elections for the VJC leadership. Furthermore, Gurevičius’s accusations were taken on faith as true by those who are dissatisfied with me in general.

Elections and rotations are normal matters in a democratic community. The decision to hold closed VJC meetings and elections, however, is illegal. The agenda for the meeting wasn’t even drawn up with me or submitted for my approval.”

It seems Gurevičius and his proponents view the VJC as a step towards controlling the entire Lithuanian Jewish Community.

Incidentally, you are also accused of having changed the principle of representation of the communities. Now the VJC, with 2,000 members, only has one vote, just as the smallest town community has. Why was this done?

Our regulation should have conformed to Lithuanian laws long ago, in this case laws regulating the activities of associations. Also, why doesn’t anyone complain that the United States only has one vote at the UN, the same as Lithuania?

Moreover, this was decided by the board of trustees of the LJC, who, according to the regulations in effect, were obligated to determine the number of representatives.

And regarding the legitimacy of this VJC meeting and elections, we will consider it further and consult. We won’t necessarily take it to court. I am always in favor of discussion first.

On the other hand, it is really clear to see that there have been great efforts made, including in private, to seize power in the community. People have been called at home, offered rides, promised even impossible things.

It’s interesting that when all this controversy began, masses of strange people started joining the VJC. Some 100 or 200 came in. They often acted aggressively and were rude to our staff who, understandably, asked them to provide documentation that this or that person was actually Jewish.

I had never seen many of these people before. But who knows, maybe they all of a sudden now remembered or learned they are Jews. In any case, they had no need for the community before.

We are truly an open and tolerant community. I would really be very grateful to Gurevičius if it was due to him that such a large group of people prepared to act have come to us.

From that camp as well come accusations of mud-slinging. Allegedly complaints by certain people are being spread by the LJC to the effect Gurevičius failed to pay his debts to them and is involved in some sort of shady financial activity. What can you tell us about that?

Truly, a complaint has reached the LJC that Gurevičius or his company have not paid creditors, or that they are in other sorts of trouble. We haven’t even responded to that in the appropriate way yet. On the contrary, his accusations against us are simply drawing attention to those matters.

But all the same, what is the real reason for this insurgency?

Perhaps the main reason is personal ambition, self-realization through such methods, thirst for power? Or maybe people just don’t like me. That’s normal. Why should all 5,000 Community members like me?

Is it possible that one of the reasons for the tension might be that the leadership of the LJC is in favor of dialogue with the Lithuanian government and state, and that gradually Lithuanian-Israeli and Lithuanian-Jewish relations are normalizing?

Is it possible a faction of Jews abroad as well as in Lithuania don’t like this?

Incidentally, the LJC webpage in a criticism of the VJC conference noted the unknown participants there spoke only Russian.

Yes, and not just in our community, there are people who are dissatisfied by our cooperation with the Lithuanian state.

That dissatisfaction also comes from certain people who have left for Israel.

To these people, Lithuania is just a land where the Holocaust happened. And nothing more. So they don’t want to have anything to do with Lithuania, or want to keep those contacts to the absolute minimum.

I understand them, but I don’t approve of this kind of thinking. Especially when we’re talking about people in Lithuania. How can you live in a country and hate it? That’s stupid and short-sighted. Just as it is to go around yelling on every street corner 200,000 Jews were murdered in the Holocaust in Lithuania.

My family also suffered extremely in the Holocaust, and I myself understand full well and feel all these most painful and most horrible matters.

I fight very actively to make sure the core matters of history are not trampled underfoot, for example, that people who murdered Jews and other Holocaust collaborators wouldn’t be rehabilitated or honored by the state.

The small Jewish community won’t survive if it doesn’t work with the Lithuanian state and Lithuanians.

The Lithuanian people also need to grow without buying into stereotypes. All of us who live here need to look towards the future.”

The Community’s Goals are Noble

The chairwoman of the Vilnius Jewish Community (VJC) was elected for four years. Her term ended on April 3, 2017. The VJC set a date for a conference and appointed an organizational committee to set the conference up. I am a member of that committee and I did everything to make sure it was held legitimately.

About 300 VJC members participated at the conference, a quorum was found and confirmed of 262 members. This is the largest quorum in the last ten years, and perhaps ever in the history of the VJC.

It is truly a shame that the official community webpage calls honored community members strangers coming out of the woodwork, and that the conference itself is compared with the Zapad 2017 military exercises.

I can only explain this in one way: those who fear elections are those who know they won’t won through democratic means. It’s quite strange, where this hyperbole comes from.

The community is and should be an apolitical organization supporting to its full powers an independent Lithuania, her European path and integration with NATO and other Western structures. We will also always support Israel.

One of the community’s goals is to create a strong connection with state institutions.

At the same time, however, we have to maintain an independent position regarding anti-Semitism, historical revisionism, cultural heritage and other important issues.