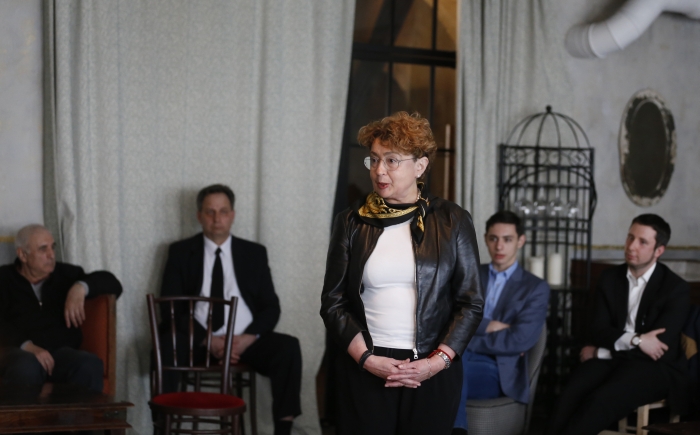 What was billed as a short meeting for young Jews to meet and discuss matters with Lithuanian Jewish Community chairwoman Faina Kukliansky last Thursday turned into a heated, high-stakes verbal brawl, lasting well beyond three hours instead of the one scheduled.

The discussion took place at La bohème restaurant right next to Pasaka Theater in Vilnius, which screened free of charge the Litvak film Meetings with Joseph. The theater managers delayed the start because the audience were all holed up in a back room at the restaurant next door, but finally came over and announced the film was starting. Of the fifty or so people present, only three appeared to leave to watch the film.

Tempers flared almost as soon as the chairwoman appeared. Daniel Lufshitz launched into some sort of tirade, fresh from his new-found celebrity as a young and upcoming wise man of Chelm following his youtube posting “Jew Wars” which managed to attack and alienate just about every Jewish institution in Lithuania, without foundation. One suspected it was intended to be comedy when he blurred out the backs of the heads of attendees of Simonas Gurevicius’s out-of-order meeting at the Conti Hotel in Vilnius, but in person there were no laughs to be found. Instead he berated Faina Kukliansky, hurling at best vague accusations of mismanagement, and then claimed to be a member of the Vilnius Jewish Community. Daniel Lufshitz, a native-born Lithuanian Jew who migrated to Israel but came back recently, was the subject of some controversy last year when he was courted to become some sort of Jewish representative for the Vilnius City Council and began making media appearances. Then, the LJC had to issue a public announcement that he was not a member of the Community and did not represent the Community in any way. This time Faina Kukliansky gently contradicted him, reminding him he was a not a member of the Vilnius Jewish Community, at which his pique visibly rose, he claimed he had a paper in writing that he would become a member after elections, that therefore he was a member now and she was a liar.

Lev Kaplan of Molėtai march fame and several friends shouted Daniel down once or twice (and some other tables joined in), but he kept coming back with his tirade. When Kaplan spoke, he seemed to have been infected by some irrational righteous indignation himself: he accused Kukliansky of causing a schism in the Jewish community by not recognizing Gurevičius’s date for elections. An attorney for the LJC explained there was a violation in the timing of the meeting, sufficient notice hadn’t been given. Mr. Kaplan became very upset and stormed out of the room, almost yelling “What difference does a day make? Is it worth dividing the Jewish community over a single day?”

A man who introduced himself as Aleksandras expressed concerns about the Community’s security system at the Community and the Choral Synagogue. He was dissatisfied because he claimed to have won a job tender as chief of security for the Community, only to see the position canceled. LJC staff say he was never notified of having won the candidate search before the tender was canceled.

Very early on a film crew arrived and set up shop in the corridor. A good part of the audience believed they came at the direction of Daniel Lufshitz.

Faina Kukliansky remained poised and rational throughout, tried to answer questions and concerns when possible and talked about general Community finances, projects to repair synagogues and plans for the future.

Towards the end of the conversation, the audience began whispering “Vinokuras.” Arkadijus Vinokuras had just announced his candidacy to head the Vilnius Jewish Community via an announcement on facebook calling on Simonas Gurevicius to tell the electorate he was under investigation for a financial crime. After it was over, Daniel Lufshitz lingered outside, heckling anyone who would listen with his unique brand of misinformed Jewish supremacy, claiming he had roots in Lithuania going back 1,700 years and proclaiming loudly there is no such thing as a Litvak, in between some select expressions of English profanity. The wise young man from Chelm apparently belongs to some non-Litvak group of rabbinical Jews who settled in what would one day become Lithuania before Constantine the Great adopted Christianity as the official religion of the Roman Empire in decline. Who can argue with such ancient wisdom?