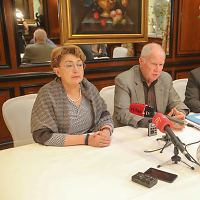 A meeting of the executive board of the Goodwill Foundation for Disbursing Compensation for Jewish Religious Community Real Estate met in Vilnius Thursday. The board decided how to use monies allocated by the government to fellow Jewish citizens for losses incurred during the Holocaust. Board chairwoman and Lithuanian Jewish Community chairwoman Faina Kukliansky said: “Rather sensitive issues were discussed. Issues such as the rebuilding of the Great Synagogue in Vilnius, cemetery protection, Holocaust education.”

“It’s wonderful that the large world Jewish organizations are returning to Lithuania. Many of them have Litvak roots,” Kukliansky noted, pointing to Andrew Baker, director for international Jewish affairs for the American Jewish Committee who also serves as co-chair of the Goodwill Foundation’s executive board.

Baker said the issue of the Great Synagogue was especially important. “Lots of discussions are taking place on what should be at that site, but whatever happens, it must reflect the historical and cultural moment which that site is,” Baker commented.

“I know there are legal arguments which could be employed, we could assert our rights and became the owners of the site. Our board resolved we should go that route,” Baker said.