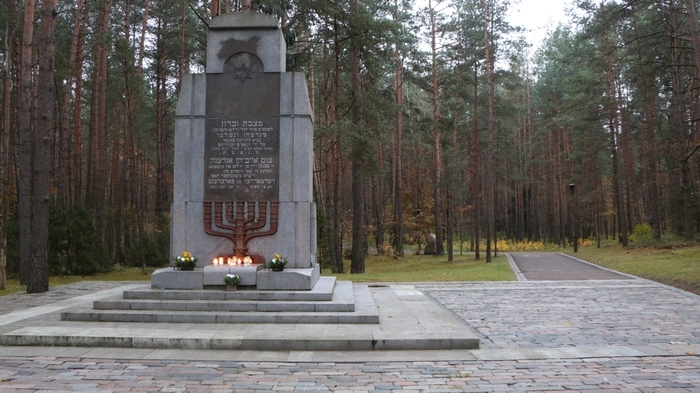 For most of the year, the Ponar Memorial Complex in the hills south of Vilnius lies empty. Outside of official commemoration ceremonies, few people make it to this somewhat inaccessible mass murder site located to one side of the railroad tracks in a village with few amenities. If you happened to walk through the complex on the dismal and gray first day of November this year, you might have been surprised. The first day of November is All Saints’ Day on the Catholic calendar, traditionally the day when the souls of the departed are honored, and in Lithuania the tradition has merged with older pagan practices to become the holiday of Vėlinės. Lithuanians usually visit the graves of departed relatives and ancestors and solemnly place candles beside their final resting places. Whole hillsides are lit by flickering candles in cemeteries around the country. This year the Ponar mass murder site wasn’t forgotten, either, in yet another sign Lithuanians are embracing the Holocaust and Holocaust victims as their own. In past years candles have been lit at the Polish memorial at Ponar, and occasionally at the Soviet monument there which famously ignores the Holocaust with the non-committal inscription: “To the victims of fascism.” This year all the major Jewish monuments at Ponar also had candles burning in little glass and plastic holders at their base in addition to candles left burning at the Polish, Soviet and Lithuanian commemorative markers.