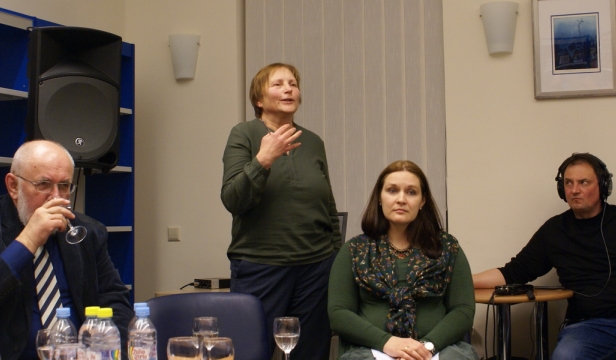 So said Rasa Bieliauskaitė, a psychologist specializing in trauma therapy, at what was, for Lithuania, a remarkable meeting of the minds recently.

The Vilnius Jewish Public Library hosted a panel discussion featuring historians and psychologists on the topic of the Holocaust and collective memory.

In their introductory statements several of the speakers, including Bieliauskaitė, mentioned Rūta Vanagaitė’s new book about the Lithuanian Holocaust, and the unexpected popularity of that book became the backdrop for much of the conversation which lasted several hours and which became a much larger discussion when distinguished members of the audience chimed in towards the end.

Professor Saulius Sužiedėlis emphasized his foreign credentials by introducing himself as “an American professor from an American university,” speaking in Lithuanian of course, and then went on to make his usual odd assortment of statements, quibbling over the date of the onset of the Holocaust in Lithuania while in seeming self-contradiction he said the Holocaust in Europe began in Lithuania. Just not on June 22, perhaps, because well into the first weeks of August over 90 percent of Lithuanian Jews were still alive, he reasoned.

Jurgita Verbickienė, the director of the Centre for Studies of the Culture and History of East European which has so assiduously avoided completely the topic of the Holocaust for over a decade now, for once admitted she wasn’t a Holocaust expert (although she has played one on TV). Her field of expertise, she said, had more to do with the history of the Grand Duchy of Lithuania, where Jews arrived and settled in larger numbers by the 14th century. She said the myth of the Grand Duchy’s universal religious and ethnic tolerance was nothing more than a myth, and that in fact the leaders had a calculated policy of balancing ethnic interests to consolidate the de facto multinational state. She said this sort of strong internal politic was what was missing from the scene when Lithuania descended into the Holocaust. She gave the audience to understand, although she didn’t say so explicitly, that the current state also lacks that sort of cohesive policy.

Bieliauskaitė and two other intelligent and funny psychologists basically spoke to the issue everyone but Lithuanians themselves realized long ago: the mechanisms of repression and denial at work in Lithuanian Holocaust denial, at both the personal level and as a matter of national honor. Bieliauskaitė said the fact of living at a mass murder site makes residents witnesses in a sense, and does induce mental trauma.

“I would like to begin with the personal, and say that this topic has been freshly elucidated for me. It’s strange to think that three years ago the double genocide theory was completely acceptable to me, the myth according to which Lithuanians say Lithuanians were killed by Communists, and so on. Three years ago I also used to respond the same way to the information, information about the scope of the Holocaust, which was known but at the same time not fully accepted, not assimilated. We were invited here to discuss what it was that happened, and it was at this point I could open my eyes and take a little bit of a look. From the psychological perspective, my colleagues might have different topics to discuss but I speak as a trauma psychologist, I would like to say about that which Žilvinas [library director and discussion moderator Žilvinas Beliauskas] mentioned, the situation of Lithuanians, especially about suicide, which grows in parallel with our children’s unhappiness, expressed in various ways, it seems to me to be connected with that experience [of the Holocaust], and it’s interesting to me to hear Lithuania isn’t unique, because my impression was that that same situation, when you live at a mass murder site, creates an experience for the people living there, so that they all become witnesses to the trauma. They experience it as witnesses. Death, their own, that of their neighbors, their friends is truly an interesting subject for research … and you can see how the story changes when you start to talk about [inaudible], you notice how people aren’t able to speak coherently any more about what happened. This is one point I think is psychologically important, and then the questions arises, or rather there is a search for how we are supposed to speak about this, do we open our eyes and take a look? I think Rūta Vanagaitė’s book is very useful in this regard. And of course there’s that difficulty, one doesn’t want to see, we know that. Just as one doesn’t want to see what’s unpleasant inside oneself, so one doesn’t want to see that in the nation either. Our research shows psychological resilience [mental health] is connected with an understanding of the continuity of family, with the ability to accept family history. Being part of families with such experiences and divisions hinders this, and one thinks that this is the place where this happens, in Lithuanian consciousness, let’s call it, that this difficulty arises,” Bieliauskaitė said.

Dr. Eugenijus Laurinaitis pointed out numerous times how subconscious reflexes can control us if they don’t surface into consciousness, and said Vanagaitė’s book if nothing else had brought the topic to consciousness, meaning it could be controlled rather than suppressed.

Saulius Sužiedėlis objected at one point in the discussion to the use of the phrase “double genocide theory.” He said no such theory exists, that it is only a label for ad hoc defensive reactions to the topic of the Holocaust mainly among groups of Lithuanians living abroad. At this point the moderator, library director Žilvinas Beliauskas, interjected that double genocide meant much more than that, that it was the attempt to equate Nazi atrocities with Soviet atrocities. The amusing thing was that both the men were correct: the author of the phrase “double genocide theory” intended it to cover both the geopolitical historical stance and the defensive posture assumed by Lithuanians at the mere mention of the Holocaust. What wasn’t said was that for more than a decade now “double genocide” has been abundantly funded by the Lithuanian state, taught at schools and made into a sort of state-sanctified historical doctrine with its own cadres of historians and ideologues furnished entire and lavishly funded institutions such as the so-called Center for the Study of the Genocide and Resistance of the Residents of Lithuania and the Museum of Genocide in Vilnius.

Panel speaker Ilja Lempertas at this point said there had been no Soviet genocide in Lithuania. Someone adjacent to him warned him he could face charges for saying so. He went on to say that there hadn’t been separate genocides in Lithuania, that Jews were Lithuanians, too. Whatever Lempertas’s true intention had been was lost in the general conversation, but he as a practicing historian and/or academic is allowed to say there was no Soviet genocide, according to the Lithuanian law covering genocide denial.

While psychological mechanisms of repression and denial, and the psychological weight of guilt vs. that of shame were being discussed, members of the audience were formulating their own questions and statements. One Jewish man who had been standing in the doorway during most of the discussion introduced himself and said not only had anti-Semitism grown in Lithuania since independence, it was obvious it was accelerating at the present time. Others pointed out that there was a lack of good literature by Lithuanians involving Holocaust themes. Another said it was odd that the only take-away message most Lithuanians got from plays and dramas involving Jews and/or the Holocaust were ethnic jokes, which they repeated afterwards. Markas Zingeris, director of the Vilna Gaon Museum, said Lithuania hadn’t grown into a real nation yet, and said there should be a coordinated educational curriculum to bring pupils and students a united sense of history and identity. Irena Veisaite had perhaps the most cogent comment and wondered amid all the psychological mechanisms which make us do what we do where human will and ethics entered into the picture. Why hadn’t Catholic priests simply followed their own teachings and why didn’t they tell their congregations “thou shalt not kill?”

While the discussion of the psychological factors at work in Lithuanian Holocaust denial probably wouldn’t surprise many Jews or thinkers abroad, it was a new and lively discussion in the Lithuanian context, and it took place in Lithuanian.

An almost complete video recording of the event has been posted to youtube here.

The Vilnius Jewish Public Library also has an audio recording available at their webpage describing the discussion here.