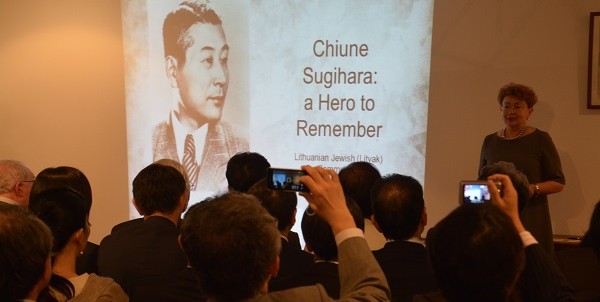 “If you save one life, you save a whole world,” so was the event called held at the Lithuanian embassy in Tokyo to honor Japan’s consul in Lithuania Chiune Sugihara, who issued “visas for life” to Jews fleeing the Holocaust 75 years ago.

“Time cannot erase from our memory the suffering of millions of people, the tragedy of the Holocaust. It is thanks to Chiune Sugihara, recognized as a Righteous Gentile, that our future generations will be able to understand that even under the worst circumstances one person, an individual, can achieve so much,” Lithuanian ambassador to Japan Egidijus Meilūnas said at the event.

The Lithuanian ambassador also quoted the words Lithuanian foreign minister Linas Linkevičius spoke during Diplomat Day: “This year we dedicate a lot of attention to the memory of Chiune Sugihara who worked in Lithuania. His basic modus operandi was to help people. This should be the most important symbol of the profession of diplomat, and because of that we may and do take pride in our profession.”

The event’s guest of honor, Lithuanian Jewish Community chairwoman Faina Kukliansky, told the audience of diplomats, Japanese politicians, representatives of NGOs and academia and reporters about the authentic history of the Jews of Lithuania and their tragic suffering during the Holocaust.

“Chiune Sugihara is a hero of all humanity, not just Japan and Lithuania,” Kukliansky said in her comprehensive presentation on the commemoration of Sugihara in Lithuania and the lives of the Jews he saved.

Embassy guests were also shown the film “Litvakai. Nuo Vilniaus iki Jeruzalės” [“Litvaks. From Vilnius to Jerusalem”], excerpts from the opera by Japanese composer Yuki Ando performed in Vilnius last May called “Sempo Sugihara: Cherry Trees of Hope” and scenes from the Nippon Television Network’s film “Persona Non Grata: The Chiune Sugihara Story.” That film was first shown to audiences in Kaunas and Vilnius in October and will premiere in Japan in December.

Shingo Akatsuka, the mayor of the city of Yaotsu, Sugihara’s hometown, who recently visited Lithuania and Kazunori Nakayama, deputy mayor of the port city of Tsuruga where Jewish refugees landed in Japan, shared ideas about the commemoration of Chiune Sugihara and continuing Japanese-Lithuanian cooperation.

The event also featured an exhibit of publications about Chiune Sugihara.

For more pictures and information in Lithuanian about the event, see the Lithuanian Ministry of Foreign Affairs website here.