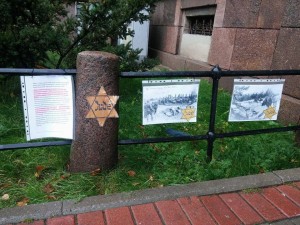 Lithuanian Jewish young people held a small protest against the commemoration of Jonas Noreika/General Vėtra on the wall of the Lithuanian Academy of Sciences building. THey hung banners with images from the ghetto where Litvak Lithuanian citizens were sent by order of Noreika.

The organizers of the protest said they are trying to bring attention to how commemoration of Noreika is shameful to the European city of Vilnius.

“I and other young people are not trying to anger or offend anyone with our initiative, we simply want to inform people, passers-by, of the controversial memorial plaque to Noreika which has been much discussed lately. I believe history must be presented objectively so that our generation and future generations who haven’t and hopefully will not experience personally what war means will understand the mistakes of the past and learn from them, European Jewish Student Union board member Amit Belaitė said.

“The historical documents clearly show Noreika was responsible for sending Jews to the Žagarė ghetto. The Center for the Study of the Genocide and Resistance of the Residents of Lithuania is attempting to characterize this neutrally as ‘the isolation of Jews,’ but we know that ‘isolation’ was the first stage in the Holocaust,” one of the protest organizers wrote on facebook.

Noreika, who worked at the Lithuanian Academy of Sciences in 1945 and 1946, was a member of the underground anti-Soviet resistance and the organizer and leader of the Lithuanian National Council and the Lithuanian Armed Forces. His reputation was greatly tarnished by his collaboration with the Nazi regime occupying Lithuania.

Noreika’s Nazi collaboration is clearly shown by his directive of August 22, 1941, ordering the Jews of the Šiauliai district be moved into ghettos and their property seized.

Noreika was arrested by the Gestapo in February of 1943 and spent two years in the Stutthof concentration camp.