The Ethnic Minorities Department awards are distributed to members of ethnic communities, the media and NGOs for their work increasing ethnic harmony, encouraging cultural diversity and unifying multicultural Lithuania.

We sincerely congratulate all prize recipients on the recognition of their work forging a better future for the Lithuanian Jewish Community and Lithuania.

The Lithuanian Makabi Athletics Club invites competitors who play badminton, indoor soccer, volleyball, basketball and/or ping-pong to apply to play in the continuing tradition of the Lithuanian mini-Makiabada. Send an email to info.maccabilt(at)gmail.com before October 23 if you’d like to participate and for more information. 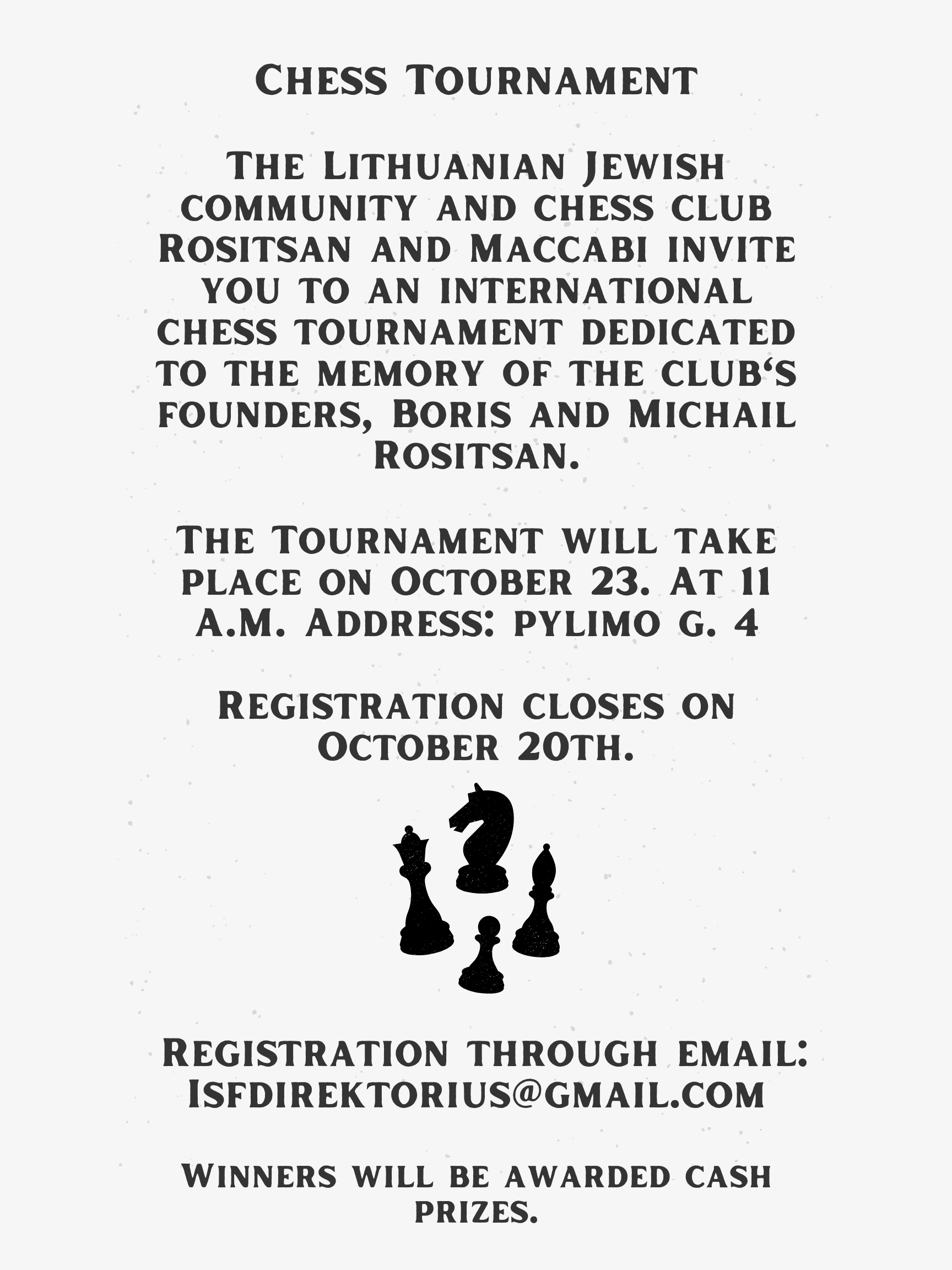 Deputy Lithuanian minister for education, science and sports Linas Obcaraskas received athletes from the Lithuanian Makabi Athletics Club and presented his congratulations on their recent wins at the 21st Maccabiah Games held this last July in Israel, which hosted more than 10,000 Jewish athletes from over 60 countries. This was Lithuanian Makabi’s ninth year at the games. They won 13 medals this time around.

The Table of Truth chess tournament will be held at 11:00 A.M. on September 25 at the Lithuanian Jewish Community in Vilnius.

The ping-pong camp supported by the Goodwill Foundation and the Lithuanian Jewish Community from August 1 to August 25 at the Simonas Daukantas pre-gymnasium in Vilnius has ended. Some 27 young athletes, most of them from the Sholem Aleichem ORT Gymnasium, attended. The three-week intensive workshop was taught by Khen and Neta Alon and Šimonas Lukša.

A new season of training begins September first, twice weekly at Sholem Aleichem and at the Simonas Daukantas pre-gymnasium. For more information contact Neta at 862957005 or Khen at 861375124, write an email to stalotenisoklubas@yahoo.com.

I’d like to present a person who, as Lithuanian Makabi president Semionas Finkelšteinas says, performed a small miracle at the recently finished World Maccabiah Games in Israel.

Daniel Šer is the silver medal winner in the junior chess competition. Daniel is 13, but he was playing against 16, 17 and 18-year-olds. A silver medal which just missed becoming gold by a hair, since Daniel collected the same number of points with the gold medal winner from the USA, and according to the rules, a tie like that means other indicators are taken into account, something is always kind of a lottery, and this time it wasn’t in our favor.

It was a great competition, very good results and a very high assessment not just for the medal won, but also because news reached us that the organizers of the competition and the chief referee sent the final results to the International Chess Federation along with the request to present Daniel the title of candidate master for his excellent playing in the competition.

The #ŽydiškiPašnekesiai discussion club moderated by Arkadijus Vinokuras will meet on August 10 to discuss the recent victories by Lithuanian Makabi Athletic Club athletes at the World Maccabiah Games in Israel.

The Lithuanian team made one of its best showings ever, winning 6 medals last month.

The club was active in interwar Lithuania from 1920 to 1940. It was originally founded in 1916. In 1926 the club had 83 branches throughout Lithuania, encompassing 4,000 members. It published a newspaper twice per month and had its own sports stadium. The club was reconstituted on January 8, 1989, at a general meeting at the calculator and business machine factory in Vilnius.

The panel discussion will be held in Lithuanian at the Bagel Shop Café at 5:00 P.M. on August 10.

Athletes from the Lithuanian Makabi Athletics Club have concluded competition at the 21st World Maccabiah Games in Israel which ran from July 12 to July 26 with around 10,000 athletes from over 60 countries. Lithuanian Makabi athletes won 6 medals, making these games among the most successful since Lithuanian Makabi was reconstituted. Table tennis player Gerda Šišanovaitė won a gold medal in singles competition and Ignas Šišanovas took silver also in singles matches. Swimmer Michailas Trusovas is coming home with silver in 50-meter freestyle competition. The youngest member of the delegation, 13-year-old Eduardas Šeras, won silver in heated chess matches in the 16- to 18-year-old category.

Congratulations to Rafael Gimelstein who took silver in tennis competitions at the World Maccabiah Games taking place in Israel, and to his proud mother Faina Kukliansky. Congratulations also to Alan Rinkevič who won silver in fencing on the international team along with athletes from France and Sweden, and a hearty congratulations to all our other Lithuanian Makabi athletes and trainers who are making such an excellent showing in so many sports.

The Lithuanian Makabi delegation along with 10,000 other participants marched in the opening ceremonies for the 21st Maccabiah World Games in Israel.

We are very proud of our athletes who this year are the sole representatives of the Baltic states at the Jewish Olympics. Good luck!

Children and young people are invited to attend a ping-pong day camp from August 1 to August 25 at the Simonas Daukantas pre-gymnasium in Vilnius from from 10:00 A.M. to 2:00 P.M. Monday to Friday. The workshop will include intensive training, public tournaments and weekly competitions with prizes. The trainers are Neta and Hen Alon with partners Šimonas Lukša and Rafael Gimelshtein who are currently representing Lithuania at the Maccabiah Games. Professional athletes Maja Bliumin and Urtė and Orinta Ramonaitė will also be participating.

Those wishing to attend may choose 1, 2. 3 or all 4 weeks, or the days they are able to attend. The workshop is open to LJC members and friends and students from Sholem Aleichem school. For more information, contact trainer Hen Alon by telephone at 861375124. To register, send a letter to stalotenisoklubas@yahoo.com

Michail Rositsan passed away July 11, 2022. He was born in Belarus in 1955 with roots in Lithuania. He completed a law degree in Lithuania, founded a business and often travelled across the Atlantic. He founded a factory producing mannequins which were exported to dozens of countries and his business card contained an address in Vilnius and in Toronto. In 2014 he served as Israel’s honorary consul in Lithuania. Together with his brother Boris he founded the Rositsan and Maccabi Elite Checkers and Chess Club in Vilnius. His brother served as president of the club and passed away in 2021. Our deepest condolences to his family and friends.

The delegation includes 23 people of whom 17 are athletes, 2 trainers (chess and swimming) and 4 coaches. Lithuanian Jewish Community chairwoman Faina Kukliansky is planning to attend the opening ceremony with the Lithuanian Makabi team. The entire team is expecting to make a good showing and to make new contacts and friends as well as learning about the country and culture in the host country, Israel.

Photos: The European Maccabi Games held in Dusseldorf from September 2 to 5, 2021, where all six Lithuanian Makabi competitors won medals.

The public organization Cultural and Historical Memory Foundation in concert with the Alytus district administration and the Butrimonys aldermanship invited the public to attend the unveiling of a new monument to commemorate Senda Berenson Abbot-Valvroyensky, the Mother of Basketball.

Basketball legend Senda was born on March 19, 1868, in Butrimonys, Lithuania, and later immigrated to the USA, where she became the Mother of Basketball and the founder of the modern rules for the game, according to the International Museum of Jewish Athletes and the Women’s Basketball Museum.

The Lithuanian Jewish Community is pleased to announce the ping-pong or table tennis program for children and adults will continue. Adults are invited to attend and play between 2:00 and 4:00 P.M. on Sundays at the LJC, and weekdays from 5:00 to 8:00 P.M. at the Simonas Dauklantas pre-gymnasium in Vilnius. Children and adolescents are invited to meet Mondays and Tuesdays at the Sholem Aleichem ORT gymnasium with 1st to 4th grades from 3:00 to 4:00 P.M. and 5th to 12th-graders from 4:00 to 5:00 P.M. For more information contact the trainers, Neta Alon at 862957005 or Rafael Gimelštein at 866283856.

The Šiauliai Regional Jewish Community will hold their 12th annual Liova Taicas athletics tournament at the Uniqa Arena there starting at 11:00 A.M. on Sunday, May 8. The games are to include indoor soccer, 3-on-3 basketball, volleyball, squash, table tennis and chess. For more information call Rašella at 869910621 or Sania at 864025950.