The Moabite Stone, also known as the Mesha stele, was discovered in 1868 at Dhibān (Dibon) about 15 miles east of the Dead Sea. The basalt stone slab was damaged by locals in 1869, but not before a papier-mâché cast was made. Pieces and fragments were collected and sent to Paris where they were reconstructed. It is still the major monument of the Moabite language.

The text on the stone is written in the first person of Moabite king Mesha (ca. 850-800 BC) who claimed to have led his warrior to victory against Israel, including recapturing cities and slaying their inhabitants. The text breaks off with about five lines missing at the end.

The events described correspond to a degree with a similar account in 2 Kings 3. According to 2 Kings 3:4, Mesha was subjugated under Ahab. Then, “when Ahab died, the king of Moab rebelled against the king of Israel” (2 Kings 3:5). Subsequently, Joram, son of Ahab, attacked Moab: “When the Moabites came to Israel’s camp, the Israelites rose up and struck down the Moabites. The Moabites fled from before them. They went forth into the land, slaughtering the Moabites” (2 Kings 3:24). In other words, the Moabites were suppressed by ancient Israel during the reigns of Omri (ca. 885-874 BC), Ahab (874-853 BC), and Joram (854-841 BC).

The Moabite Stone includes a similar timeline: “Omri, king of Israel, had oppressed Moab many days, for Chemosh was angry with his land. His son succeeded him, and he too said, I will oppress Moab” (Gibson 1971). Though the son is not mentioned by name, he is most likely the offspring of Omri, namely Joram. This is a point of contact consistent between the Moabite Stone and 2 Kings 3. At the same time, the Moabite Stone fails to mention how Omri, Ahab and Joram went on campaigns against the Moabites. Likewise, 2 Kings does not detail how Mesha seized Israelite territory.

Moreover, 2 Kings 13:20 comments further on the Moabites: “Elisha died and they buried him. And a group of Moabites regularly invaded the land in the spring of that year.” If Elisha died around the beginning of the 8th century BC, it suggests that Mesha successfully annexed certain regions of Israel during his reign, sometime between 840 BC and 800 BC, although Moabite incursions into Israelite territory after the reign of Mesha were smaller in nature (i.e. groups of Moabites, not the Moabite state).

The text contains allusions to the Israelite god as well as the “House of David” and the “Altar of David.” Until now, scholars weren’t convinced these references to King David had been translated correctly.

The Moabite phrase “House of David” consists of five letters: bt dwd. “Bt” is similar to today’s Hebrew word for house, bayit, which is beit in its construct form. “Dwd” can be thought of as modern Hebrew’s daled vav (the letter, in this case, is actually waw), daled which spells the name “David.”

Until now, only the first and fourth letters of the series, bet and waw were clear. In a late-2022 article entitled “Mesha’s Stele and the House of David” in the winter issue of Biblical Archeology Review, researchers André Lemaire and Jean-Philippe Delorme re-examined the evidence. They write:

“In 2015, a team from the West Semitic Research Project of the University of Southern California took new digital photographs of both the restored stela and the paper squeeze. The team used a method called Reflectance Transformation Imaging (RTI), in which numerous digital images are taken of an artifact from different angles and then combined to create a precise, three-dimensional digital rendering of the piece.

“This method is especially valuable because the digital rendering allows researchers to control the lighting of an inscribed artifact, so that hidden, faint, or worn incisions become visible.”

More recently, in 2018, the Louvre Museum which now houses the stele took these sorts of new high-resolution pictures and projected light onto them coming directly through the 150-year-old squeeze paper. The researchers were able to glean a much clearer picture of the ancient records. This, explain Lemaire and Delorme, is how they were able to see evidence of the other three letters, taw (modern Hebrew tav), dalet and dalet.

How similar are Moabite and Ancient Hebrew? Encyclopedia Britannica characterized the relationship between Moabite and the Hebrew of its time as differing “only dialectically.” According to Dearman and Jackson’s 1989 book “Studies in the Mesha Inscription and Moab,” “It is probable that Moabite and Hebrew were, for the most part, mutually intelligible.” 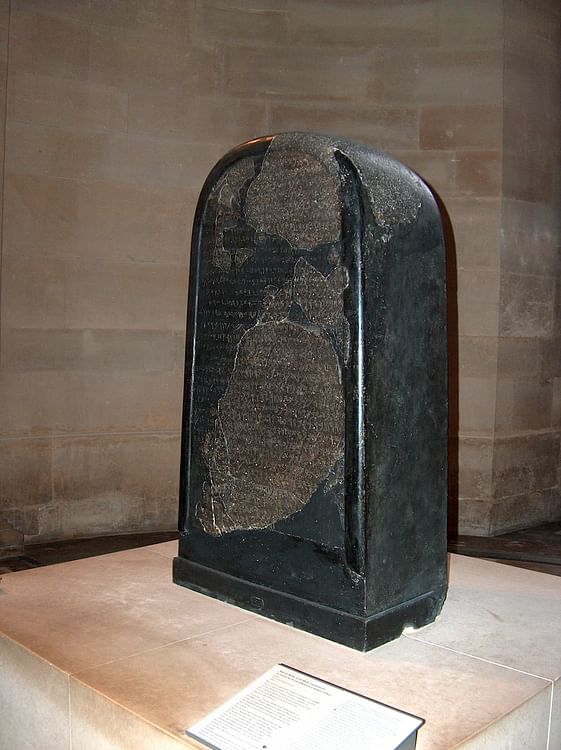