The artist was invited to Lithuania to participate in the “Kaunas, Cultural Capital of Europe 2022” program. An exhibition of his work is now showing at the M. K. Čiurlionis National Art Museum.

Kentridge-Geffen is an intellectual and a person who causes others to think and feel. His sources of inspiration range from science to literature and his artistic methods are the most varied, from sketches with coal to painting, textiles, animated films and opera productions, demonstrating his broad education and broad field of interests.

William Kentridge-Geffen said Lithuania made a deep impression on him because of its natural beauty and architectural legacy. He said with obvious emotion:

“I have always called myself a Litvak, I am part of the South African Jewish community which came from Lithuania, whence came the vast majority of South African Jews. But I myself have never been to Lithuania.

“My grandfather in his autobiography wrote only one sentence about the place where he spent the first years of his life: ‘I was born in Lithuania, whence came many South African Jews, I quit Lithuania and went to England.’

“I know about the historical complications among people whose families came from Lithuania but who never felt themselves to be Lithuanians, they’ve always felt like outsiders in the country where they grew up and lived.”

He viewed photographs of buildings built by Jews before World War II at the Panevėžys Jewish Community archive and visited the main Jewish heritage sites in the city.

Born in 1955 in Johannesburg in the Union of South Africa, the artist with Litvak roots has been recognized and has won all sorts of prizes for several decades now. His work has been shown in the most important galleries around the world and has become part of large collections.

He related how his forebears came from Panevėžys and Utena, the capital of Aukštaitija. His great-grandfather Geffen was born and raised in Utena. He left for South Africa when World War II broke out.

William Kentridge-Geffen was graduated from Witwatersrand University in Johannesburg with a bachelor’s degree in political science and African studies, and later earned a diploma in the fine arts from the Johannesburg Art Foundation. In the early 1980s he left South Africa to study acting and theater at L’École Internationale de Théâtre under teacher Jacques Lecoq in Paris. He had hoped to become an actor, but later said it was fortunate for him he discovered there he was a bad actor, and settled therefore for becoming an artist instead.

From 1975 to 1981 he had acted and directed in the Junction Avenue Theatre Company in Joburg. In the 1980s he was an art director for telefilms and tv series. Before that till the mid-70s was making prints and drawings. In 1979 he created from 20 to 30 linotypes which soon became known as the Pit Series. In 1980 he executed about 50 small-format etchings which he called the “Domestic Scenes.” These two extraordinary groups of prints served to establish Kentridge’s artistic identity, an identity he continued to develop in various media. Despite his ongoing exploration of non-traditional media, the foundation of his art has always been drawing and printmaking.

In 1987 he made charcoal and pastel drawings, loosely based upon Watteau’s “Embarkation for Cythera [Κύθηρα].” These wonderful works exhibit the scene of an exhausted, dystopian division of the city and, at the same time show the artist’s growing sense of the mutability of space and movement. 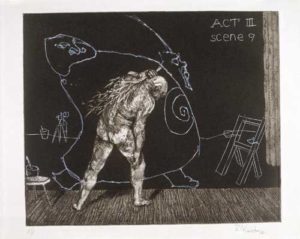 In 1996 and 1997 Kentridge created a series of eight etchings called Ubu Tells the Truth, inspired by Alfred Jarry’s Ubu Roi [King Ubu] in 1896. They were also inspired by post-apartheid South Africa’s Truth and Reconciliation Commission.

While he was leaving, William Kentridge-Geffen said Panevėžys and Lithuania had left a very warm impression on him and added he would always remember this trip.