The Lithuanian city of Molėtai, located about 60 miles north of the capital Vilnius, marked the 80th anniversary of the beginning of the Holocaust on August 29. On that date in 1941 more than half the population of Molėtai, the local Jewish community, was murdered.

Five years ago a large Jewish commemorative march was held in Molėtai, attracting international attention. Tzvi Kritzer, the organizer of that event, was made an honorary citizen of Molėtai by the local municipality.

This year’s event began with the unveiling of a monument at the site where the town’s four synagogues once stood. The monument is a commemorative plaque affixed to a large field stone in the town center with a silhouette of the former synagogues and inscriptions in several languages saying this is where the synagogues once stood. Saulius Pilinkus, an art historian who was directing this event, called upon Lithuanian Jewish Community chairwoman Faina Kukliansky, Molėtai regional administration mayor Saulius Jauneika, screenwriter and cartoonist Ilja Bereznickas and the creator of the plaque, Aurimas Širvys, to help in the unveiling. 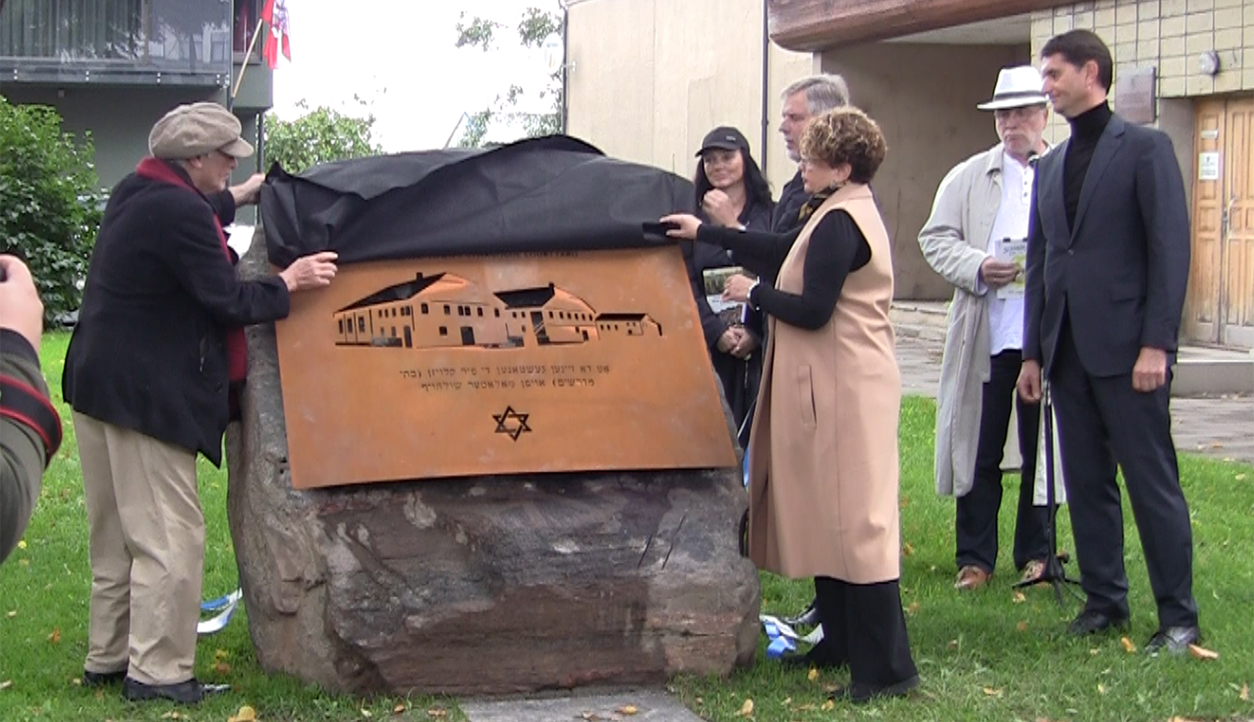 The ceremony was held at municipal square where the four synagogues once stood.

Molėtai regional administration mayor Saulius Jauneika said: “The suffering and loss of the Holocaust is not just the painful burden which survivors must bear, Jewish children and grandchildren who lost their families, but is also the loss of the entire country, a still unhealed wound and a dark passage in the history of our city and country which will remain forever. As we look back at it, we should remember, no matter what the circumstances, human values, conscience, basic goodness and morality cannot be trampled upon, and nothing can justify the mass murder of innocent people. Today as we mark the 80th anniversary of the Holocaust, we repeat the commemorative march and also remember the legacy of the Jews of Molėtai by unveiling a monument at the site where the synagogues stood. This monument will remind us of the Molėtai Jewish community which is no longer with us, it will remind us of history and the tragedy of the Jewish people. The memory should remain alive, and we must make all efforts to insure this kind of tragedy never happens again, that all of our fellow citizens be duly respected and cherished.”

After the plaque was unveiled and speeches were delivered, participants formed a procession and walked through the rain to the site of the mass murder. At the monument to Holocaust victims there Choral Synagogue cantor Shmuel Yaatom performed kaddish. Lithuanian conductor and musicologist Donatas Katkus spoke as well, and Arkadijus Gotesmanas, Petras Vyšniauskas and Dmitrijus Golovanovas performed their musical composition “Thou Shalt Not Kill.”

A screening of the film “Last Sunday in August” was held at the Molėtai Cultural Center in the evening.