Lithuanian state television LRT reported protestors against Lithuania’s so-called quarantine restrictions crossed the line and made light of the Holocaust, according to the people they talked to about Tuesday’s protest in front of the nation’s parliament where some donned yellow stars of David and called the government’s shutdown of economic and social life genocide.

The first secretary at the Israeli embassy to Lithuania also provided negative comments to LRT regarding the use of Holocaust symbols. Lithuanian Jewish Community chairwoman Faina Kukliansky cautioned the use of the star of David and other symbols isn’t in itself anti-Semitic, but added that it’s important to look at the context in which they are used.

“I’ve seen criminals sitting in court who put on a yellow star [of David], and saying you are a Jew is no justification for committing crimes or that you can’t be tried or convicted because you are a Jew. Everything depends on how the symbol is used. Still, people who do use this symbol should understand what it means in general and what it means to Jews. Often people fail to look more deeply into the meaning of this symbol,” LJC chairwoman Faina Kukliansky told LRT state television.

Lack of Knowledge and Offensive Behavior

The chairwoman of the Lithuanian Jewish Community characterized the use of the star of David to protest Lithuania’s universal quarantine restrictions as “disgusting.” She said restrictions on the rights of Jews during the Holocaust were being compared to Lithuania’s so-called quarantine.

“These are completely incomparable things, these people don’t have an understanding of this,” she added.

Chairwoman Faina Kukliansky said comparing vaccination, which is for the protection of the vaccinated person as well as those around him, to the Holocaust demonstrates a lack of knowledge and is offensive.

“For me personally as a Jew this is offensive, because vaccination doesn’t deny me any fundamental rights, even if these restrictions are introduced which are being threatened against unvaccinated people. … There are some times in life when people need to come together and thing about what each individual could do to help another. Otherwise this disease will not end. As long as there is no treatment, the disease won’t end, and the only way [forward] is vaccination,” the head of the Lithuanian Jewish Community told Lithuanian state radio and television broadcaster LRT.

She said she is also pondering whether comparing this situation with the Holocaust might be due to a misunderstanding of history, or perhaps it comes down to the desire to use the Holocaust to spread one’s own information and position. LJC chairwoman Faina Kukliansky said the restriction of human rights during the Holocaust was pointless, and that they sought the extermination of people merely because they were Jews.

“There is no indication here by which people are vaccinated or not, or have their rights restricted because they have dark, blond or green hair. Secondly, what the Jews had to suffer during World War II and in the ghettos and concentration camps, the wholesale loss of their families and relatives, living in completely inhumane conditions… How can this be compared to the injection of an intravenous needle?” Kukliansky asked.

“You have to totally lack sense for these incomparable things to be compared. On the other hand, if it’s not clear to people what the Holocaust was, if they don’t even have any empathy for the people who suffered, then they are equating themselves with martyrs and so become very important because they are also suffering as the Jews did during the Holocaust,” LJC chairwoman Kukliansky speculated.

“That’s why this small symbol is necessary, to confirm the manner of suffering, a shot, a jab … Terrific suffering. There is no limit to stupidity,” Lithuanian Jewish Community chairwoman Faina Kukliansky commented to Lithuanian state television and radio broadcaster LRT.

Use of Holocaust Symbols Depressing

Professor Jurgita Verbickienė at the History Faculty of Vilnius University told LRT the use of Holocaust symbols at the protest was intentional, a form of expression which was decided upon prior to the protest.

“Much much earlier there was already talk about ghettos, about the supposed deportation of unvaccinated people to ghettos. This rhetoric went on for a time, but the incredible thing is that it took on these visual expressions,” Jurgita Verbickienė, PhD, told Lithuanian state television.

The history professor said the use of these symbols [sic, this symbol, the star of David] was depressing. She suggested those speaking out against vaccination could have created their own specific symbol to demonstrate their isolation from society, in which case she would have rendered a different judgment. As it was, she said, these symbols [sic, this symbol] which was used by the German National Socialists was disturbing because, she said, it has a direct and absolute connection with the Holocaust.

“The people making these sorts of comparisons really do not understand what they are comparing. These are incomparable things,” the history professor told Lithuanian state television.

Desecration of the Memory of the Holocaust

Jurgita Verbickienė also said the use of these symbols [sic] can’t really be characterized as Holocaust denial, but that this was derision of the memory of the Holocaust.

“These are people who have crossed a certain line which should not be crossed. … When we talk of the total lack of empathy, about the total rejection of historical memory and respect for our fellow citizens. … The expression of disrespect towards a portion of citizens in this way is a totally unjustifiable matter,” Vilnius University history professor Jurgita Verbickienė told Lithuanian state television and radio broadcaster LRT.

She went on to note some of the protestors were among the staunchest defenders of the naming of a street in Vilnius after Lithuanian Nazi leader Kazys Škirpa and of a plaque commemorating Lithuanian Holocaust perpetrator Jonas Noreika.

“This goes to show that the direction in which these people are attempting to defend their freedoms, an exotic imaginary kind of freedom, is sufficiently radical and highly complex, and not necessarily tolerant of the freedom of others and their understanding of civility,” the VU history professor told the state broadcaster.

Jurgita Verbickienė said the protestors included people from different age groups, and asserted that meant their primary, secondary and higher education experience was different. She said some of the protestors had gone to school in Soviet Lithuania while others attended school in independent Lithuania.

“The posters and banners employed the concept of fascism. Hitler is equated with fascism, something which comes out of the Soviet textbooks. [But] in the historiography of the West and according to the position which we maintain today, Hitler is equated with the National Socialists. But this is in a certain sense a product of Soviet education, where Hitler was [considered] a fascist,” Vilnius University history faculty professor Jurgita Verbickienė, PhD., explained to an interviewer from Lithuanian state television and radio broadcaster LRT.

She said this means the people using the term “fascism” studied during the Soviet era when the Holocaust and an assessment of Jewish history perhaps were not fully understood.

“It is very unfortunately that today the Holocaust has become an instrumental toy which is being used to draw attention to make an impression by assigning to one’s self [the status of] victims with no way out, with those being tortured without a choice. The possibility is being rejected that the current situation is their personal choice,” the history professor commented.

When May the Symbol Be Used?

Jurgita Verbickienė, PhD., said the utilization of these kinds of symbols is always very sensitive and so one must think and rethink endlessly about using them. She said the appropriate place to use them is museums, educational lessons and in processions by Holocaust survivors or their relatives, where the situation and the narratives are appropriate.

“When the context is emotionally set, when there are people for whom this is not a toy but a clear and profound symbol. So far we haven’t forged a relationship with symbols. … We must behave carefully with the star of David, sufficiently sensitively, because this is a star which talks about peoples’ life,” she argued.

“Here’s a simple question: would we like it if someone acted that way with the cross? … Could anyone even imagine the specific use of Lithuanian religious or state symbols? Clearly this would cause tension,” the VU professor of history argued.

Jurgita Verbickienė, PhD., said we as a nation still haven’t experienced our own history, otherwise we would be more sensitive. Lack of sensitivity would disappear if we understood about which we spoke: “So longs as these sorts of ideas are born, that we can compare the present with the Holocaust or with any other genocide, this is clear proof that people don’t understand their history or that of others,” the Vilnius University history professor said in an interview with Lithuanian state radio and television broadcaster LRT. 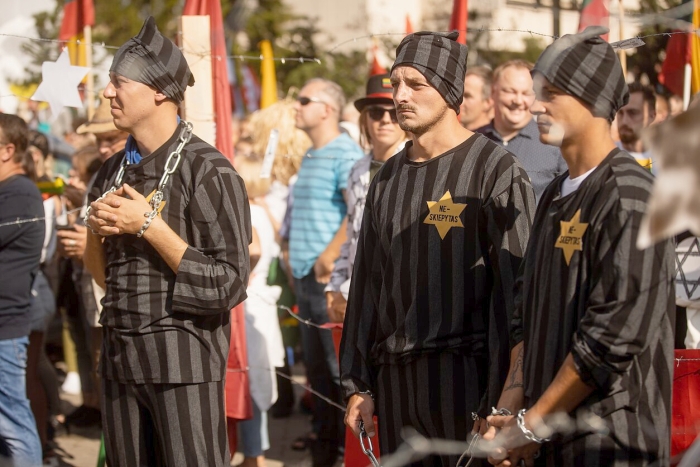