Photo: Pinchos Fridberg, the only Jew left in the Lithuanian capital of Vilnius who was born there before the Nazis invaded in 1941. By Brendan Hoffman for the New York Times.

by professor Pinchos Fridberg, an alter vilner id [an old Jew born and raised in Vilnius]

“Rebe, will there ever come a time when the words Vilne and Yidish will be inseparable again?”
“Saydn nor mit Meshiakh’n ineinem.” [Not unless it comes with the Messiah.]

The article “Как это делалось ин Вилнэ…” [This Is How It Was Done in Vilne] became the main feature for issue no. 505 of the international magazine “Мы Здесь” [We Are Here] in 2015. More than 7,000 people read it, and I began receiving letters from people whom I didn’t know.

The largest Russian-language weekly newspaper in Lithuania “Обзор” [Review] reprinted this article on its website on March 8, 2021.

The article concerns the history of Jewish Vilnius.

I think it might be interesting to non-Russian-language readers as well. *

“This is How It Was Done in Vilne…”

As I was putting my archive in order, I came across a small program for a concert to celebrate the 10th anniversary of the Jewish volunteer collectives. This program is more than half a calendrical century old. I think the reader might be interested to see “how it was done in Vilne.” The program contains over 30 photographs. I will present a few of them. I believe it has long been time for them to be revived on the wider internet.

P.S. In 1956 we, a group of first-year Jewish physics and mathematics students at Vilnius University, signed up for the Jewish choir established under the Club of the Executive Board of Lithuanian Professional Unions. At that time it operated at the building which was then located at Gorky Street no. 92.

I well remember the first song we began to learn: “Du zolst nit geen tsu kein andere meidalakh” [You Shouldn’t Go to Any Other Girls].

My career as a vocalist ended before it even began. After the third rehearsal the choir director, an elderly and very tactful man, called me aside and said quietly (in Yiddish of course): “Khaver Pinya, it seems to me you don’t have absolutely perfect pitch.” I asked him to elaborate: “Reb Blekharovich, did you mean to say I have no pitch absolutely?” In place of an answer, the director just closed his eyes.

My younger brother Isaak was much more successful. Ten years later he performed the role of Leibl Rafalovich in Sholem Aleichem’s “Wandering Stars.” He began his career as writer, dramaturge and director at the Jewish Folk Theater. 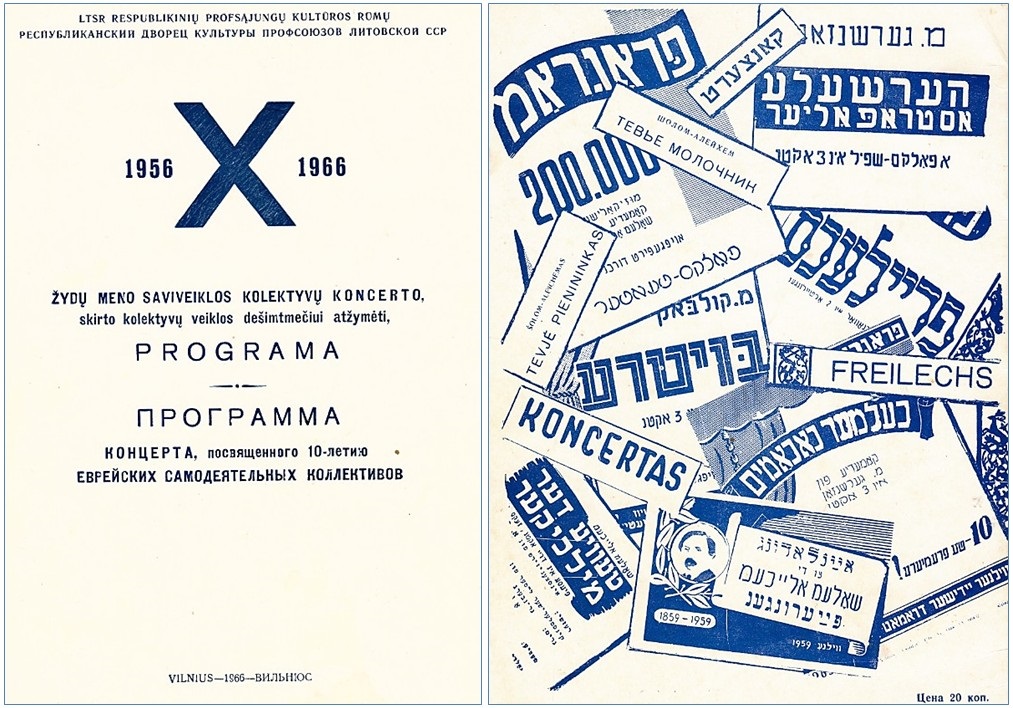 Page 1: Program of the concert by the Jewish volunteer collective of the Palace of Culture of the Republican Professional Unions of the Lithuanian Soviet Social Republic to mark the 10th anniversary of activities 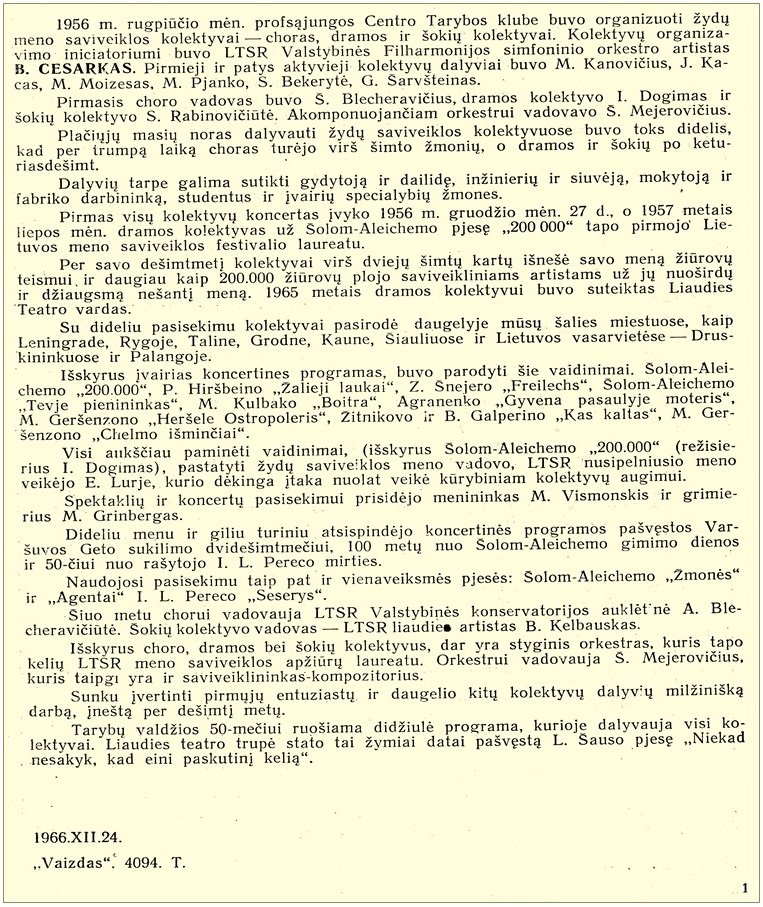 Translation of the preface to the program:

In August of 1956 Jewish artistic volunteer collectives–a choir, drama and dance collectives–were established within the Central Committee club of the professional unions. The initiator of establishing these collectives was Lithuanian Soviet Socialist Republic Philharmonic symphony orchestra performer B. CESARKAS. The initial and most active members of the collectives were M. Kanovičius, J. Kacas, M. Moizesas, M. Pjanko, S. Bekerytė and G. Šarvšteinas.

The desire by the wide masses to participate in the Jewish volunteer collectives was so great that over a short time the choir had more than one hundred people and the drama and dance collectives over forty each.

Among the participants you will encounter a doctor and an artisan, an engineer and a tailor, a teacher and a factory worker, students and people of all different professions.

The first concert by all the collectives took place on December 27, 1956, and in July of 1957 the drama collective won first prize at the Lithuanian Artistic Volunteers Festival for their performance of Sholem-Aleichem’s play “200,000.”

Over this decade the collectives have presented their art over two hundred times to the jury of the audience and more than 200,000 audience members have applauded the performers of the volunteer collectives for their sincere and joyful art. In 1965 the drama collective was presented the title of People’s Theater.

The collectives have appeared to great success in many of the cities of our country, including Leningrad, Riga, Tallinn, Grodno, Kaunas, Šiauliai and Lithuanian summer resorts Druskininkai and Palanga.

All of the above-mentioned stage performances (except for Sholem-Aleichem’s “200,000” (directed by I. Dogimas)) were presented by director of Jewish volunteer art and recognized LSSR artistic figure E. Lurie, whose grateful influence constantly operated on the development of the creative collectives.

The artist M. Vismonskis and the make-up artist M. Grinbergas contributed to the success of the plays and concerts.

Currently the choir is directed by LSSR State Conservatory teacher A. Blecheravičiūtė. The director of the dance collective is LSSR folk artist B. Kelbauskas.

Besides the choral, drama and dance collectives, there is also a string orchestra which has won several LSSR volunteer art viewers’ prizes. The orchestra directed by S. Mejerovičius, who is also a volunteer composer.

It’s difficult to fully appreciate the gigantic labor achieved by the initial enthusiasts and many other members of the collectives over these ten years.

A huge program is being prepared for the 50th anniversary of Soviet government including participation by all the collectives. The People’s Theater troupe is planning to celebrate that milestone anniversary by presenting L. Šausas’s play “Never Say That You Are Walking the Last Road” [Zog nit keynmol az du geyst dem letstn veg]. 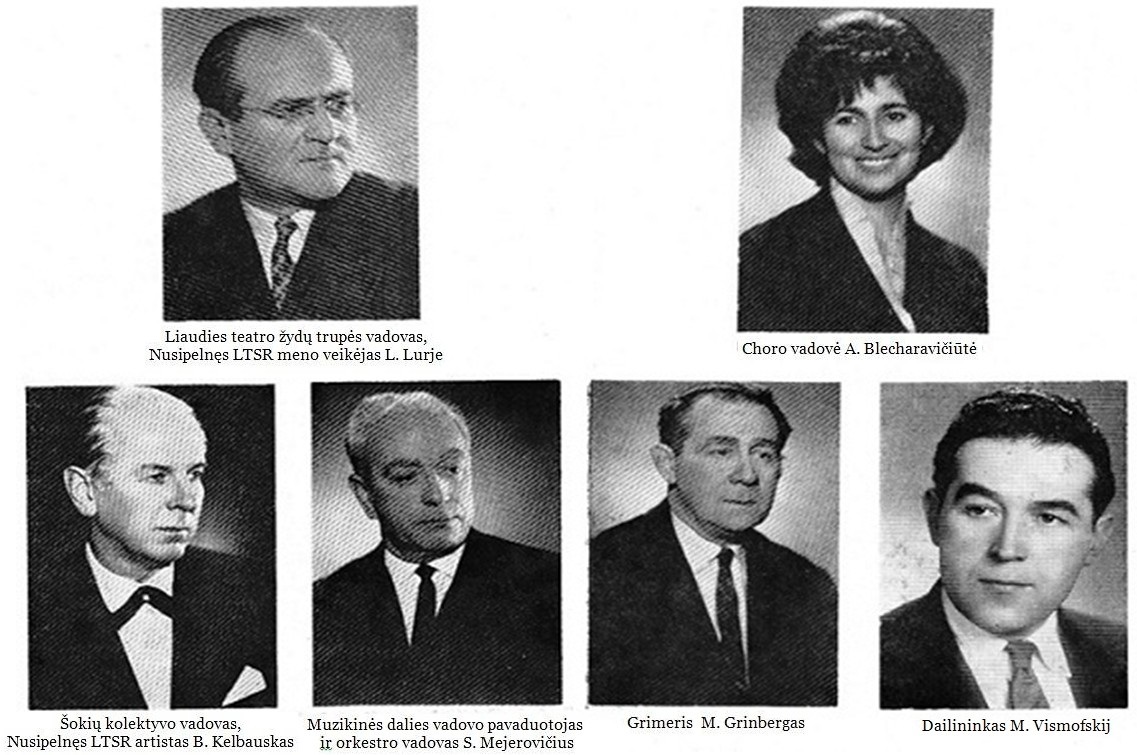 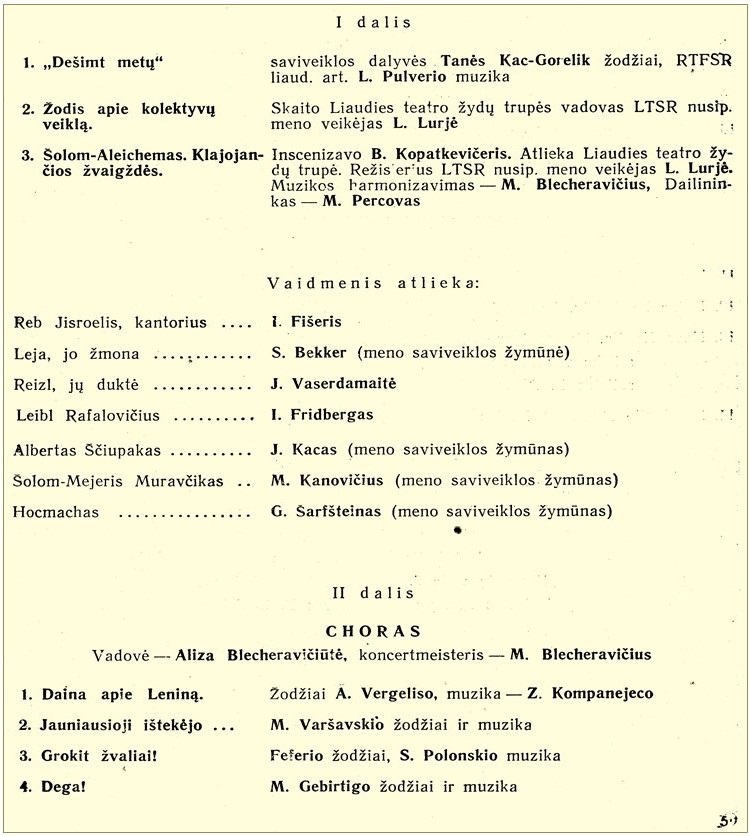 2. A Word about the Activities of the Collectives 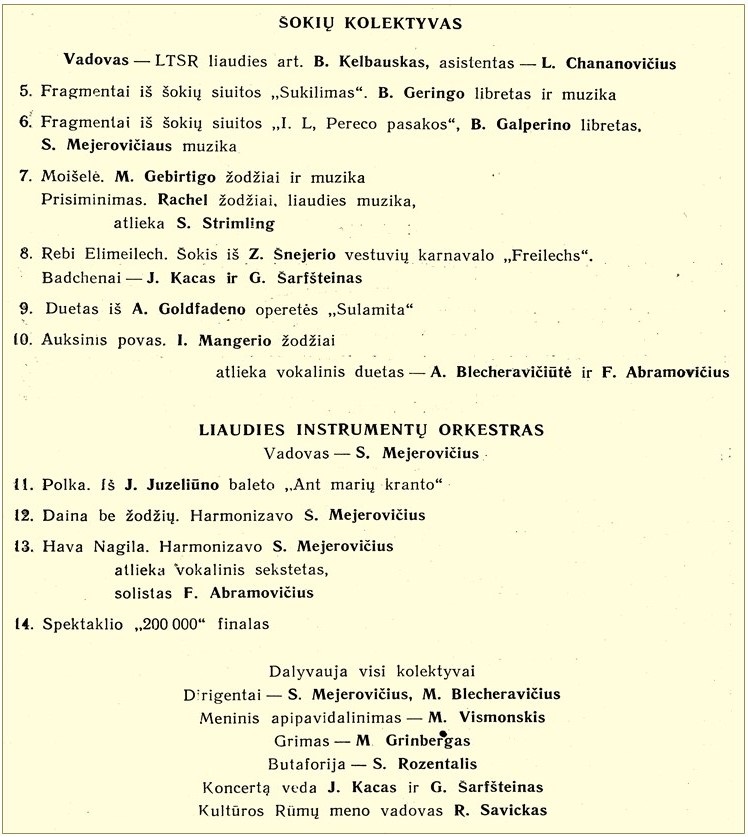 5. Passages from the dance suite “Sukilimas” [Uprising]. Libretto and music by B. Geringas

6. Passages from dance suite “Tales of I. L. Peretz,” libretto by B. Galpern, music by S. Mejerovičius 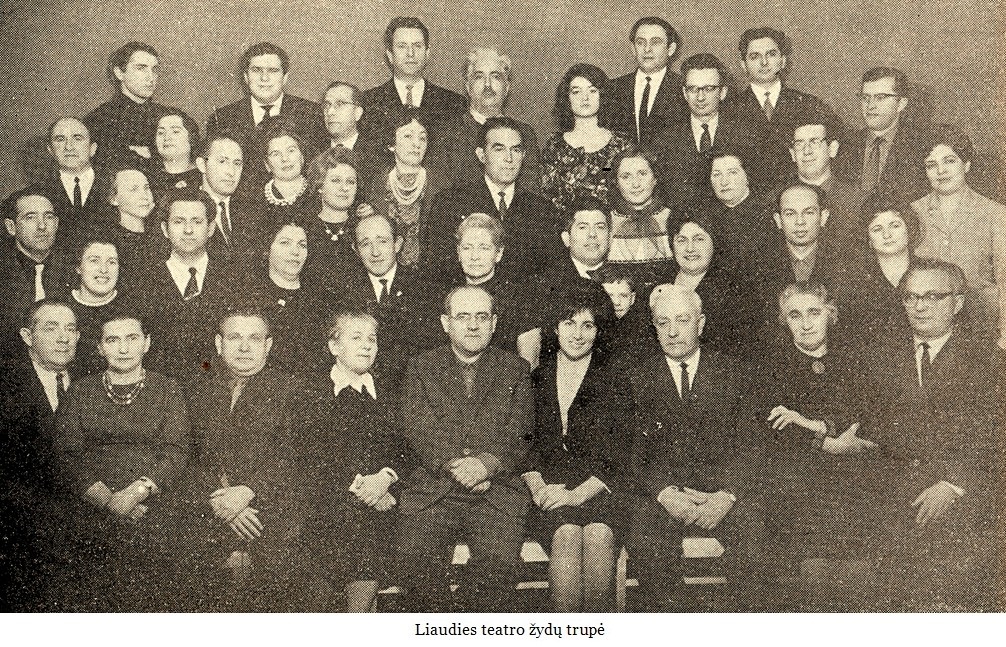 Jewish troupe of the People’s Theater 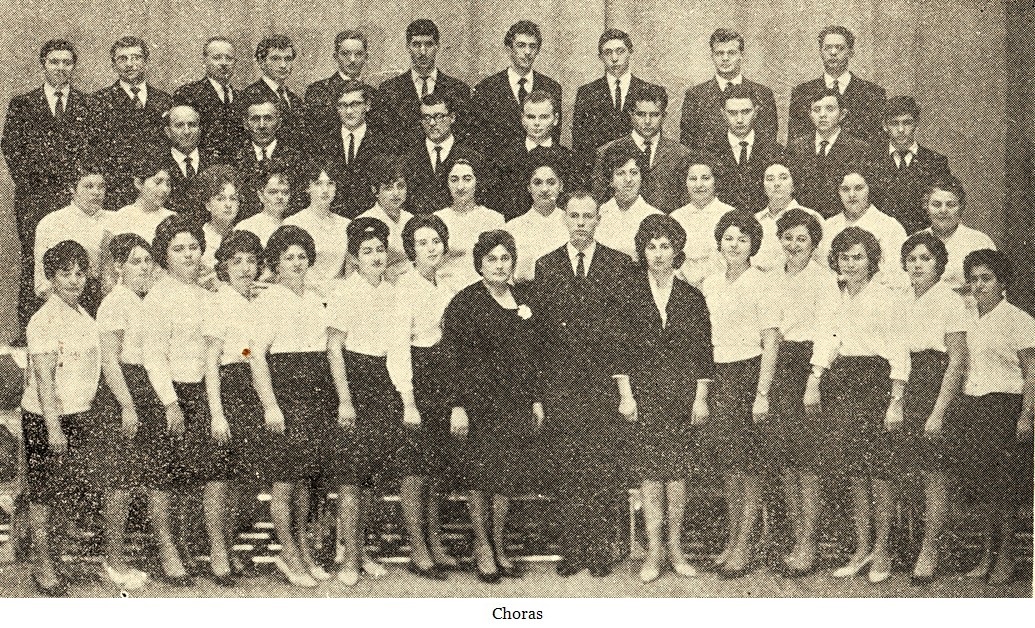 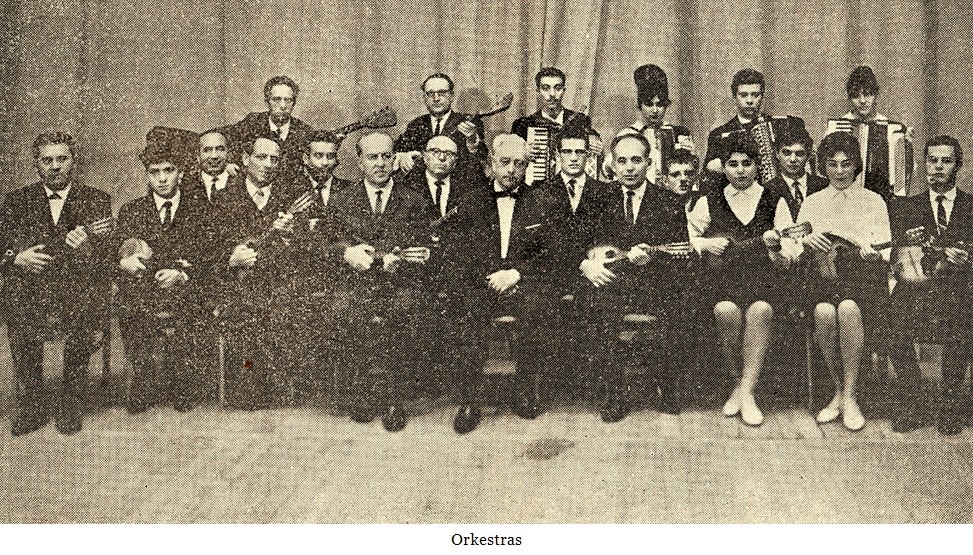 Jewish volunteer art under the Palace of Culture of the Professional Unions of the Lithuanian Soviet Socialist Republic is a phenomenon which awaits more serious research.

The year my involvement in Yiddish volunteer efforts, 1956, was clearly influenced by the 20th Congress of the Communist Party of the Soviet Union.

But what about its further existence?

Why didn’t they shut it down?

There is no doubt at all there were “stool pigeons” involved in the volunteer activities whose duty it was to inform the KGB of “Zionistically inclined” members. Who did the informing? What sort of things did they report?

Answers to these questions can (and I think should) be found in the Lithuanian KGB archives. After all, the KGB knew everything, “and even more.”

A collection of documents called “Secret Archives of the KGB, 1954-1991” appeared in 2011. There I learned I had been an Israeli spy almost 30 years ago. Furthermore, the Byelorussian KGB (I worked at Grodno University then) had demanded, in a special coded cable, the withdrawal of permission to work with classified documents from the people with whom I had had contact in Vilnius.

The funniest part is, the people who were supposed to break off contact with me were my students, colleagues and even the deputy director for academic affairs.

My entire life was closely connected with this wonderful collective from this institute’s super-high frequency technology department.

After the article appeared in “We Are Here,” some readers sent me small programs and copies of newspaper articles from the perestroika and post-perestroika era. To my mind they aren’t nearly as interesting as the material from the Soviet era, when it was very difficult and even dangerous to call yourself (and thus to be) a Jew.

The wepage of the Lithuanian Jewish Community is the only venue where I can publish this material.

The Lithuanian websites won’t publish me. But I really do understand them. Sometimes it becomes rather difficult to beat oneself. See, for example, the article “Спасённая Раманаускасом-Ванагасом еврейка … чего доброго, не еврейка” [The Jewish Woman Rescued by Ramanauskas-Vanagas … Probably Wasn’t Jewish”].

* Note: this English version was translated by Geoff Vasil from the original in Lithuanian.