Photo: Just a few buildings witnessing to the Jewish past still stand in Utena.

As the only living witness left, I am able to share some special memories.

My father Jakov Bleiman, who was formerly a rabbi in Crimea, performed the same duties in Utena, where my brother-in-law Efraim Yudelovich also lived with the family. At the beginning of the war I lived in Kaunas.

I decided to see my parents and then, if the right conditions were in place, to evacuate with the entire family. As it turned out there was no way to leave for somewhere, because just as I arrived in the city the Germans entered. Our fate became clear: we were all condemned to death.

Thursday. The first day of the German regime. Dozens of Jews are herded to work, led to the Germans and their Lithuanian helpers. The work is meaningless and insignificant, just in order to deride the Jews, sending them around all day with brooms, shovels and other implements.

No one feeds them, and only separate small groups of Jews succeed in begging for a crust of bread. The Germans and bastard Lithuanians murder Jews returning home after this work and steal there property and goods. This wanton mayhem went on for a week. Over this entire period there wasn’t a single Jewish household left untouched and dozens of Jews were murdered. The fear of death grew stronger every day. In the morning everyone looked forward to the evening, and in the evening, to the morning. “Order” was introduced in the city, whose main feature was bullying Jews. By-standers came together with Lithuanian bandits and tossed all the relics, books and other things out of the synagogues (there were three of them in Utena). They marched my old father to the pile of books thrown together and ordered him to tear and burn them. My father refused. Then the murderers set his beard on fire and one of them shot him. My father was brought back in very bad shape. My brother-in-law operated on him. The operation was a success and my father healed. But then other disasters began. Jews were strictly forbidden to walk the city streets without an escort and the inscription “Jew” appeared on every Jewish house. Jews were forced to sew a patch of yellow material to their clothes, on the front and back. All people were forbidden to communicate in any way or do anything with Jews, and those who ignored the ban were arrested for no reason. All the synagogues were turned into jails. Besides them, there was a large jail operating in the city. Two Jewish doctors were arrested with their families: my brother-in-law (my wife’s brother) Efraim Yudelovich and another doctor Aks, and another was left, but they murdered him later anyway.

Besides the large contingent arrested, they took another 41 hostages, including former deputy city burgermeister Zurat from Utena and other important people from the city. More than a month passed. We all felt death breathing down our necks. The terror carried out against the Jews didn’t end, while the struggle for a bite of bread became ever more difficult.

At six o’clock in the morning of July 14, 1941, announcements were pasted to the walls of buildings and houses proclaiming all Jews in Utena must quit the city by 12 o’clock, and those not following the order would be discovered and shot. Jews were ordered only to go through the forest for about 2 varstai [1.3 miles or 2.13 kilometers] from the city in the direction of Molėtai. At seven o’clock in the morning, however, armed Lithuanians began kicking Jews out of their homes and arresting them. Panic began. Jews rushed to flee to the forests as quickly as possible. It was horrific. A mass of several thousand Jews had to leave them homes where they had lived their entire lives in the course of one hour and go with their small parcels of items into the forest, not knowing what terrible fate awaited them there. At the edge of the forest Lithuanian police stood with Germans and checked parcels, seizing money, gold, silver and other valuable items. The forest was under observation. It was strictly forbidden to go far off. It was forbidden to light a fire. They allowed a small amount of water to be brought back only under a guard’s supervision. The Jews were told they would be kept there for three days, until a territory in the city had been fenced in as a ghetto. Everyone believed that’s what would happen, but then a great many more days passed than the three days promised. The situation in the forest became complicated, many people began to fall ill and there was no medical aid. Everyone who had been locked in the synagogues and the large city jail had already been shot by then. Some of the hostages were brought into the forest as proof no one would shoot Jews anymore. Everyone dreamt of the ghetto.

On the day of August 1, 1941, police entered the forest and registered all men and all women from the ages of 17 to 60. Everyone though this was being done for work reasons. I also registered. After that ten others Jews and I were taken for work, while the rest remained in the woods. They took us to a location where a ruined house needed to be cleaned out. We worked late on into the night.

In the early evening a group of Jews was marched from the woods through where we were, comprised of 400 or 500 people, including the young rabbi Nakhman Girshovich and Zurat and his two sons. They were all being marched in the direction of the jail. We thought they would take us there, too, but they returned us into the forest instead. In the forest we found all the men preparing to go into town. But at the last moment a policeman came and told the other policemen something quietly. Then everyone who was in the small group was released and told to go into the forest. So passed another week. Apparently the Russians told the secret that a large group of people had been shot. But no one wanted to believe these rumors, and didn’t pass them on. It would have affected the women whose husbands had been taken away very deeply.

At the break of dawn on Thursday, August 7, all of us were marched to work. We didn’t notice anything suspicious. I kissed my mother and father, thinking I would return to them after work. Unfortunately, that was the final time. Never again did I see the good, deep eyes of my father, never again did I touch the trembling hands of my mother. That morning I said good-bye to them forever. They told us they were taking us to work. We, a group of 300 people, accompanied by 3 guards. We were taken to the jail, thoroughly searched and waited for the warden, as we had been ordered. In the courtyard there more Jews, brought there from Leliūnai, Molėtai, Anykščiai and other locations in the Utena district. We were forbidden from speaking with them. At midday a German Gestapo officer arrived. He lined us up in columns of four. The jail warden arrived and those who were dressed were ordered to take off their outer clothing, with the explanation everyone would be going to work soon. After leaving the prison we saw Jewish women lined up in columns of four people, guarded on both sides by armed Lithuanians. After leaving the territory a little bit away from town, they began to beat us severely. Those who fell on the way from the blows they immediately shot, and continued to oppress those remaining. We cried out for death, no longer able to endure the suffering. Suddenly they ordered the men to lie down with their faces to the ground, while ordering the women to continue on. We heard shots and the screams of women. When they finished murdering the women–that took about twenty minutes–they ordered the men to get up and go. And then everything repeated itself again: shots, screams, silence. And my turn came. We were strong young men, so in secret we decided to resist as much as we were able. The mass murder site looked like this: a small hill surrounded by forest on three sides with a swampy area below overgrown by dense grass, small trees and bushes. On top of the small hill pits about three or four meters deep and up to ten meters wide had been dug. Next to these stood a Lithuanian dressed in military clothing and wearing a special scary mask. He held a long whip which he used on everyone to make them jump in the pit more quickly. A German without outer clothing stood next to the pit to the left of us, with a small machine gun in his hands–like a butcher at his workplace–and shot at the Jews coming to the pit. Nearby stood Germans and Lithuanians, among whom was the burgermeister and others whom I didn’t recognize. The German with the machine gun ordered us to come to the pit. We attacked him. I grabbed him by the feet and he fell down. Bullets rained down on us from all sides. I heard the death moans of three of my friends who fell next to me. I played dead and rolled down the small hill. Crawling in the high grass, I was able to make it to a ditch with water a few hundred meters away from the massacre site. I lay under the water until it was night, breathing through a piece of straw. I heard the entire time new groups being brought there and shot. A very hard rain began and it got dark. I was very cold so I decided to climb out of the ditch. As I walked I warmed up a little and withdrew into the forest. I found no one there anymore. Not knowing where to go, I turned in the direction of Kaunas. I wandered naked and hungry in the woods for perhaps six weeks before I reached the Kaunas camp [Kaunas ghetto, later Kaunas concentration camp]. I found other Jews there in the forest. Life again became torturous and frightful.

Nineteen forty-four came. The Red Army approached the Lithuanian border. We hoped they would liberate us and our hopes came true. In the spring I fled the camp [Kaunas concentration camp] and, hiding out in different places, lived to see liberation. 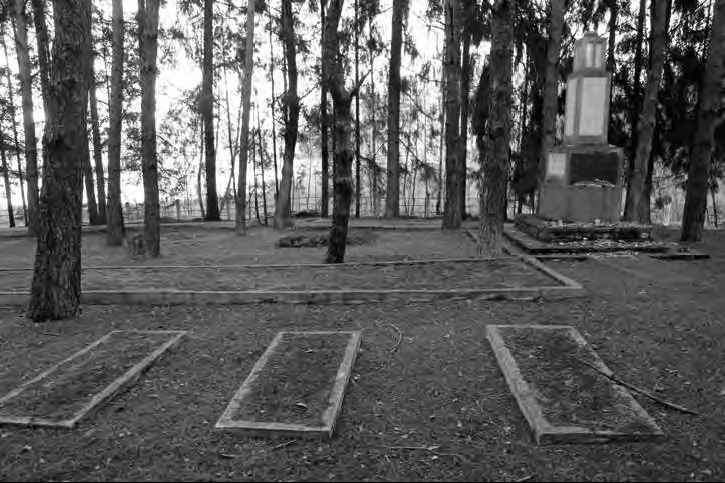 Photo: Vyžuonos priest Ignotas Ragauskas is buried in one of these graves. In November of 1944 his remains were exhumed and reinterred at the old cemetery in Utena.

Translated by Geoff Vasil from the Lithuanian translation by Vytautas Ridikis of the Russian original by Tsozdik Bleiman. From the local Utena cultural publication Indraja, No. 4 (79), December, 2020.