Lithuanian Jewish Community chairwoman Faina Kukliansky remembers January 13. Lithuanian Jews, who restored their community finally 30 years ago after decades of restrictions, took part in events in those days [in 1991] Nowadays when they talk about the struggle for freedom, members of the community emphasize the greatest gift: the opportunity to speak freely.

What do you remember personally about that fateful night at the TV tower, the Lithuanian Radio and Television building and the parliament? What does the Jewish community remember about these events?

Jews did the same thing as everyone else in Lithuania. We have collected the recollections of our community members of that fateful night. They watched the television broadcast until it was cut off and they went to the barricades, in Vilnius but also in Kaunas and other cities.

We were there where the majority of Lithuania was. I remember when I travelled from Varėna during that time and saw the road full of tanks. At that time I had an elderly guest from America who said he was seeing tanks for the first time in his life.

On that particular night my friends and I–all of us were together with our young children–followed events, held vigil, waiting for our husbands who were there in the crowd by the barricades or who were doing their job as doctors.

My children are now grown up and always remember that night and the tension. It wasn’t clear what would happen and the tanks were already in place in the city. We didn’t have any information, we had seen the final frame when E. Bučelytė had to quit the [television] studio. We learned that night from medics that there were dead and wounded people.

I called my boss at night to tell him we should examine the scene of the event. It was impossible to do that right away because of the tanks on the move and the attacking soldiers. But in the morning an operational group visited the scene of the event and this became the start of a process which turned into a decades-long investigation.

After the tragic events Lithuania really needed the support of the international community. How did the Litvak community around the world respond to Lithuania’s fight for freedom?

Now I remember Dov Shilansky, born in Lithuania, liberated from a concentration camp, who then immediately left for Israel and became the first speaker of the Knesset. He came to Lithuania in 1991, after the events of January 13. The country was under a [Soviet] blockade at that point. He is my uncle and he, his wife, his children and I spoke at length. I remember his children photographed the empty shelves of the stores in Vilnius. They were here and they testified to the world Lithuania’s resolute decision to be independent.

I also remember another critical moment, when Gorbachev was arrested and the coup began. A professor of criminology from Bar-Ilan University in Israel arrived and stayed with my father. We asked him whether he was afraid to travel to Lithuania. He said, no. Those of us who remembered the Holocaust, however, which hadn’t been discussed in Lithuania for several decades then, who remembered the post-war period and the first occupation, we were worried because we knew what could happen. But those for whom freedom is important were here, regardless of their fear. They were living witnesses.

How did the life of Lithuanian Jews change after the proclamation of independence?

I’ll begin with the establishment of the Jewish Cultural Association which happened before the proclamation of independence, in 1988 when the national rebirth began.

I remember I was on the association’s first board of directors where free discussion began, something which didn’t exist in Soviet times. Grigorijus Kanovičius, Simonas Alperavičius, deputy [director] Maša Grodnikienė, professor J. Blufšteinas and others were active on the board of directors, people who had had to limit their activities and expressions of Jewish culture during the Soviet times.

In early March of 1989 the first congress of the Lithuanian Jewish Cultural Association was held. About 500 delegates attended. Vytautas Landsbergis, the honorable chairman of the Sąjūdis [independence movement] read out a public resolution which said: “We will never agree with the anti-Semitic statements that the Jews allegedly, as a nation, have ever wished Lithuania ill or harmed Lithuania, just as we cannot agree with the accusations that the entire Lithuanian nation allegedly murdered the Jews.”

The task of the Cultural Association was to revive as soon as possible the lost cultural life of Jews. The cultural and educational life of the Jews of Lithuania, after all, began undergoing extermination already in 1940 following the first Soviet occupation.

Even Jewish kindergartens where Hebrew was spoke were closed, as were newspapers and high schools. The heders, the people’s schools where the Yiddish language was still taught, still existed for a time. Everything which could facilitate the existence of the Jewish community and educational and academic work was closed, intentionally.

This included the YIVO institute and the Strashun Library, and all of the property of the communities was nationalized or seized, and the synagogues were closed.

There is really very little discussion of the cultural repression against the ethnic and religious communities. What was life like for Jews until the restoration of independence?

The deportations touched all ethnic groups, and Jews just like Lithuanians began being deported, with about 1 percent of all members of the Jewish community living in Lithuania already deported by April of 1941. This was the largest per capita deportation of any ethnic group and the private property of the Jews was seized.

Forget the Holocaust for a second, let’s remember the post-war period when it was forbidden to talk about it. We were always called Soviet citizens, no one called us Jews, and that’s what was written at the Holocaust mass murder sites. In the statistics we were and remain “and others.” People were arrested and held for 15 days for the processions to Ponar. There was also fear in talking about the rescuers of Jews. Many hid the fact they had helped Jews and didn’t live to see the day when the rescuers could be thanked publicly.

So Lithuanian independence allowed the Jewish community to begin talking openly and without fear about painful experiences, about protecting the monuments which still stood, about taking care of the sites important to us, about thanking our rescuers. After independence Lithuanians began seeing Zionism as the Jews’ independence movement. These are all the specific victories of freedom.

Visits to Lithuania by Knesset chairman Dov Shilansky and later by the current president of Israel R. Rivlin had a great influence. Incidentally, these two people began speaking loudly about restitution as well, and about the unjust rehabilitation of people who had participated in the mass murder of Jews–all the outstanding issues of Jews.

Then came Lithuanian president Algirdas Brazauskas’s speech in Israel. This should not be forgotten.

How do Litvaks living in Israel recall the events of 1991 in Lithuania?

But back then there were various reactions. Those who had undergone persecution during the Soviet era never forgot it and understood the scope of events transpiring in Vilnius. Lithuanian Jews who left between 1970 and 1973 remembered how repressive the Soviet system was. There are documents in the KGB archives about the surveillance of a Jewish folklore ensemble. At the Palace of Professional Unions [in Vilnius] there was also a Jewish Theater which was under constant surveillance by the national security forces. Some of them chose to leave the country thinking they would never be allowed to return to Lithuania.

When a relative was leaving for Israel for the rest of their life and we said our farewells, it never entered our heads that we might travel to Israel some day for a summer vacation. And those who left directed their talents towards the people’s welfare.

Much is being written currently about COVID inoculations in Israel, but it’s being forgotten that the Israeli health minister, Yuli-Yoel Edelstein, was a prisoner of conscience because he wanted to resettle in Israel, he held Zionist views and he studied Hebrew, which he speaks perfectly. He was only able to emigrate after international powers got involved. Prisoners of conscience were only freed after the Helsinki [Final] Act, when they were allowed to leave for our historical homeland, the Land of Israel.

You grew up under those conditions of Soviet silence which didn’t allow for making Jewish culture public. Would you call your generation lost?

No. We are not a lost generation. I think we have a lot of something which the youth of today lacks. We were young, well-read and we knew the Yiddish language which today’s youth has lost, very unfortunately. The experience of several regimes, the Nazi and Soviet regimes, actually gave us a lot. We learned of the mass murder of the Jews from eye-witnesses, and we have something to say to our children about the Soviet regime from experience. We never hid our identity. You will not find a single document concerning my family where anyone said they were not Jewish. We have always been proud of it. Everything which I had to experience is my experience and is dear to me, and I wouldn’t trade it for anything.

The 30th anniversary [of Lithuanian independence] also brings a lot of optimism. I have read and listened to the statements by the newly-appointed [Lithuanian] foreign minister Gabrielius Landsbergis. His statements pay a great deal of attention to Jews. Wonderful, we would dearly love to work together.

For our members, just as it is for all citizens of Lithuania, January 13 is a symbol of freedom and sacrifice which must never be forgotten. The children of our community throughout Lithuania have drawn pictures of the forget-me-not flower [as the symbol chosen to mark January 13], and today we fearlessly write their names on these drawings in their Lithuanian and Jewish forms: Tamar, Bernardas, Ariana, Vincas, Danielius, Natanas, Liuka, Diana, Vladikas, Zlata, Nikolė, Marija, Nora, Dovas, Meira, Liza, Markas and others. They are all the children of freedom. 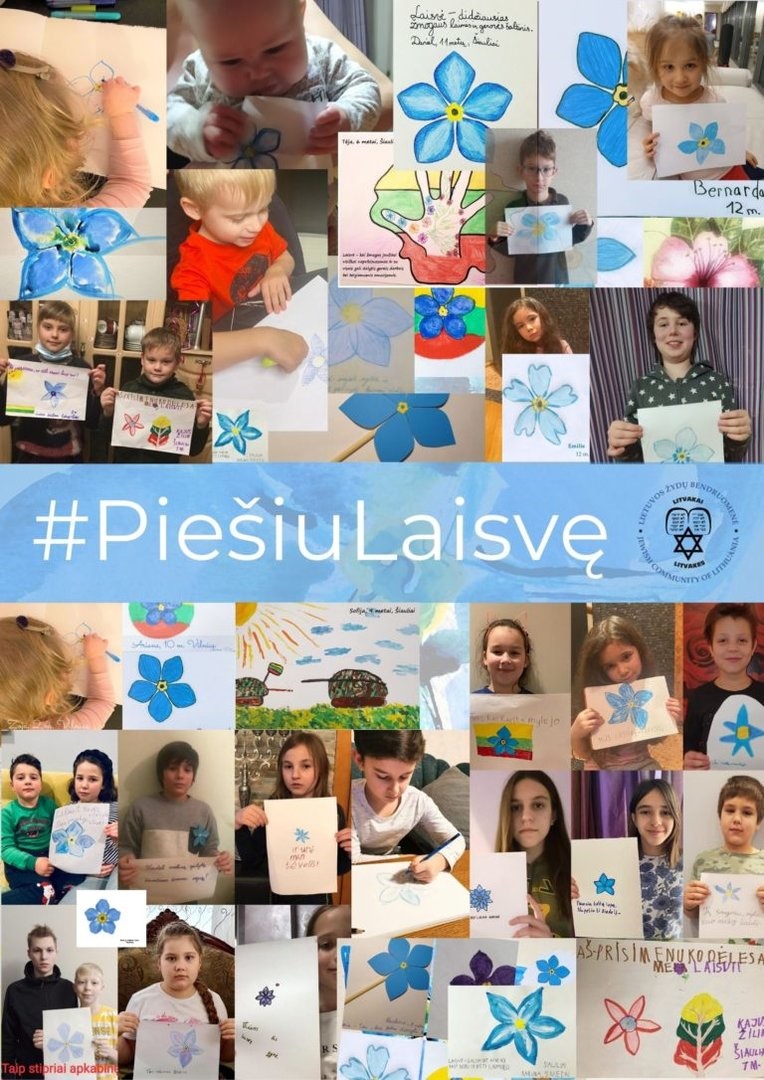