Tanks next to Lithuanian Radio and Television. Photo: P. Lileikis

Šura Jacovskytė remembers those days in January of 1991. She lived in the center of Vilnius and her friends used to gather at her apartment during those tense days and they watched events unfold together on LRT television.

“I saw and I still remember the final frames when Soviet soldiers broke into the television [studio], the image vanished and there was darkness… It was a horrible feeling,” Šura recalled. “I felt the same as everyone else did. I couldn’t believe the Soviet miasma would come back. The people of Lithuania were already different, they had got a taste of freedom, so it was impossible to go back. It was by then inconceivable to support the actions of the government of the Soviet Union, what they were getting up to, that was totally clear. Even a few months later, after the coup began, I told myself: ‘No, this cannot be…'”

“I was at the parliament during those days. I walked every day from one site to another, and I had arrived with my dog. I used to go day and night, like a watchman’s rounds. I lived in the center so friends used to come to me to warm up. I was young then and the memories are unerasable.

“I had gone to the Lithuanian Radio and Television building in the [early] morning of January 13. I remember there were foreign correspondents standing there and filming. Since there were armed soldiers already walking on the other side of the street, I warned the correspondents that if they were going to stand there on the front line they shouldn’t film, because the soldiers could do anything, they might smash their cameras. They thanked me. My mother lived across the street from Lithuanian Radio and Television on Konarskio street. The windows were smashed out of that building, all sorts of things like that.

“I went that night to the parliament with my dog. I remember there was a young man roasting hot dogs by a bonfire, he gave one to a dog, and my dog grabbed one and got a clip on the snout for it. I said it was very fair he got hit because he shouldn’t grab things from others.

“I felt bad because everything began to change with the [national] revival, we lived with such hope, we were morally ready for freedom. Big changes and liberation began for the people with Gorbachev in 1985. It didn’t happen right away. Lithuanians, Russians, Poles and Jews were talking, and felt solidarity. Division began later.

“After that there was the August coup, when my family was by the sea, and I thought, what should I do? I decided not to travel to them there, let them wait it out there. I acted correctly, because on the second day I understood they had lost, coups are accomplished over several hours, not over many days.”

Julius Ptašekas, currently professor of medicine at University of Riga

“I have a deep connection with the Jewish community. We published a book about Lithuanian Jewish doctors and it fell to me to direct the publication of this book.

“When the events of January began in Lithuania I was abroad. During my trip I found out the Vilnius Television Tower and the Lithuanian Radio and Television building were surrounded. The news about the people’s determination to defend [these buildings] reached me elsewhere. Of course I understood earlier what would happen here. There was much tension. And we well knew the former powers of the Soviet Union. I and many other people thought the military intervention would have been greater. The very dramatic action which happened in Vilnius with the actions of the Soviet military caused much fear. There was no longer that euphoria, that a beautiful future was coming, the sense of tension dominated, and uncertainty over whether it would be successful.

“The spirit of positive expectation of a different kind of life came to me when I was still an academic behind the iron curtain. I remember the then-minister’s blocking travel anywhere and participation anywhere, going through all that suffering, standing for hours upon hours in line at OVIRE, the agency which issued permits to travel abroad.

“Finally there came a different opportunity for learning, one hoped it would all end well, but there was much fear.”

“I was a student in 1991. I had just matriculated at Vilnius University to study philosophy. It was my first semester, the first round of exams, which never happened because the events of January began, which one could have expected, but still, they astonished everyone. I remember there was the expectation anything could happen, even repression. The mood was gloomy and angry. We remembered events in Poland the Czechoslovakia.

“After tanks ran over people at the television tower, I went to the wake with the coffins of the victims at the Palace of Sports, and I felt this sense of resistance and resolution, this universal solidary, unity, which never existed after that.

“With my history classmates we held vigil at the television and radio building, that was before the attack. Our generation was filled with enthusiasm and we talked about democracy and Lithuanian independence, freedom, freedom of thought, speech and action.

“Now I see in Lithuania this strange kind of nationalism which I completely do not support because it reminds me of the Soviets and their official propaganda. Now some sort of national symbols are being resurrected and history is being turned into martyrology. I can only look at this with irony.

“On the fateful night of January 12 I had gone home to wash and I listened to the radio. I heard about the victims. I went to Lithuanian Radio and Television in the morning but there was already a cordon around it and it wasn’t possible to get closer. We were at those sites and we believed there would be a democratic Lithuania, and that, without regard to one’s origins, religion and convictions, you would be able to live in this democratic country as a citizen and help develop it.

“I fear now that we are still wandering around in circles in the same place. It scares me that educated people are saying things just for political expediency, trying to conform to some ethnocentric nationalist sentiment. No one says now that we are a democratic state. I think we should defend civil rights and take greater part in governance. Every opinion and belief should be important to us.” 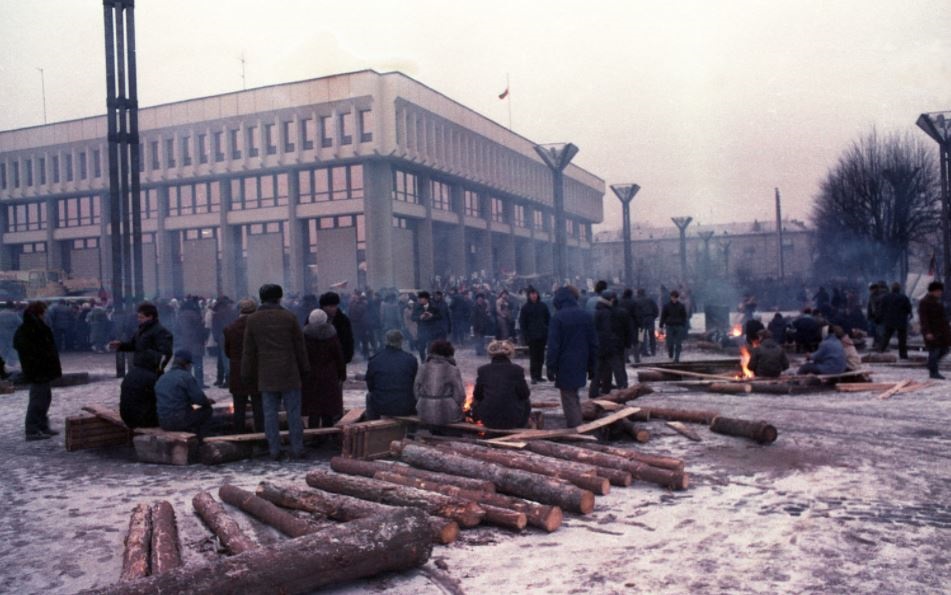