A statue was unveiled Saturday to World War II-era Japanese diplomat Chiune Sugihara. He issued so-called visas for life, saving thousands of Jews from Lithuania and Poland as Nazi Germany advanced on the small Baltic country of Lithuania.

The bronze statue is almost 12 feet high and is located on Kaunas’s famous promenade, Laisvės aleja or Freedom Alley, next to the Metropol hotel where Sugihara continued to issue visas even after being ordered to stop, close down the Japanese consulate and to travel to a new assignment in Berlin. There are numerous stories Sugihara even issued visas from the train as it was pulling away from the station, and that he left blank visas and stamps with Jews in the city so they could make their own visas for life.

The sculpture designed by Martynas Gaubas depicts origami cranes which he says symbolize freedom. An inscription in Lithuanian, Japanese, English and Yiddish, reads: “Whoever saves a life, saves the world.”

The Lithuanian president attended the ceremony together with staff from the Japanese embassy.

“We unveil in Kaunas a statue to a man whose humanity and courage long ago became our moral compass,” Lithuanian president Gitanas Nausėda said.”Sugihara is returning to where he issued visas for life 80 years ago to Jewish refugees who sought a safe haven from the atrocities of war in Lithuania.

“The majority of the people rescued will never forget this wonderful person from distant Japan. Although the occupiers trampled upon the freedom of Kaunas as well as the rest of Lithuania, its spirit survived in the deeds of Sugihara and the other Righteous Gentiles, including diplomats, priests, doctors and peasants. Risking their lives to save the life of another, together they saved the world from physical and moral self-destruction.

“We had to live through the Nazi and Soviet occupations, to lose and to get back again an independent Lithuania, in order to understand more fully where hatred and apathy towards the suffering of our fellow human beings can lead,” president Nausėda said.

The Lithuanian parliament declared 2020 the Year of Chiune Sugihara to mark the 80th anniversary of his mission to save Jews in Kaunas.

Chiune Sugihara issued visas for transiting Japan, in tacit cooperation with Dutch consul Jan Zwartendijk, who issued visas to Jews for travelling on to the Caribbean island of Curaçao, which didn’t require any visas for entry at that time. 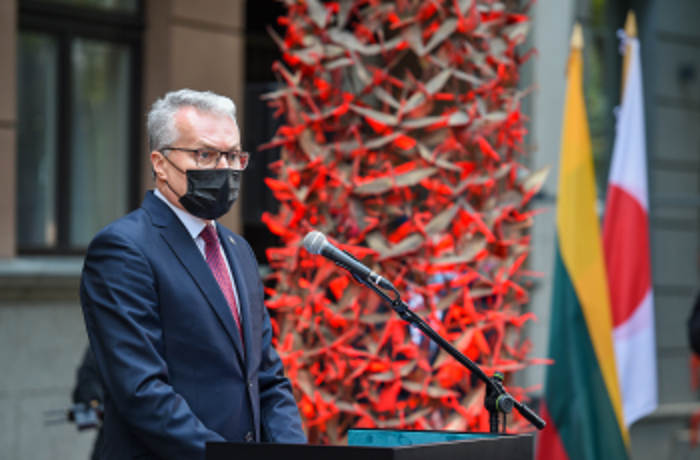