An awards ceremony to present the award “For Contributions to Friendship between India and Lithuania” was held in Rusnė, Lithuania, recently. The recipient this year was Vytautas Toleikis who researched and published the story of the friendship between the father of modern India Mohandas Gandhi and Rusnė-resident Litvak Hermann Kallenbach.

Gandhi and Kallenbach’s friendship was commemorated in a sculpture by the late Romas Kvintas which was placed on the bank of the Atmata River in Rusnė in 2015. The Lithuanian embassy to India contributed to erecting the statue.

A collection of articles is to be published called “Sielos dvyniai” [Twins of the Soul] detailing Gandhi and Kallenbach’s friendship and what they did together in South Africa, also to be launched in Rusnė. The book will be available at libraries as well as the Sala Ethnocultural and Information Center in Rusnė.

This is the second time this awards ceremony has been held. The person to be recognized with the award is selected by the Lithuania and India Forum. Last year honorary Indian consul in Lithuania Rajinder Chaudhary received the distinction.

Gandhi and Kallenbach, who was raised in Rusnė, met one another in South Africa in the early 20th century. Kallenbach became a close friend to Gandhi and also supported financially his non-violent resistance movement.

Kallenbach was born in Žemaičių Naumiestis in Lithuania in what was then the Russian Empire in 1871. Soon after the family settled in Rusnė in the far west of the country. His father operated a small lumber mill and was successful selling wood. Kallenbach was graduated from the Tilsit (Tilžė) gymnasium, and pursued an education in architecture in Königsburg in East Prussia, in the northern German state of Mecklenburg and in Stuttgart and Munich. In 1896 he left for South Africa and worked successfully as an architect in Johannesburg and Durban until 1906. In 1904 he met Mohandas Gandhi and began supporting him financially, and set up and participated in protests with him. He adopted Gandhi’s worldview. Kallenbach bought an extensive plot of land near Johannesburg and established the Tolstoy Farm there, which Gandhi used as a sort of commune and ashram. Kallebach died in 1945; 2021 will mark the 150th anniversary of Kallenbach’s birth. 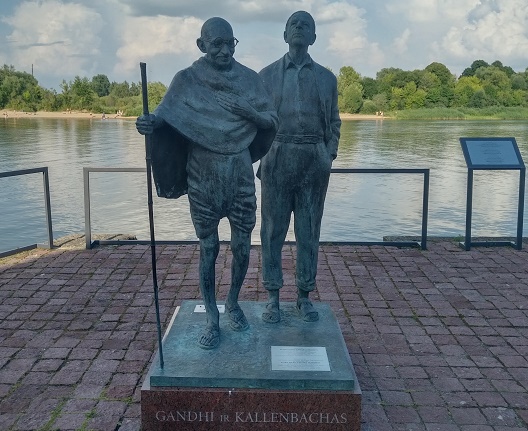