The Goodwill Foundation and its co-chairs, Rabbi Andrew Baker and Faina Kukliansky, retain the same opinion expressed earlier, namely, that the LAF is officially recognized as an anti-Semitic organization, and its members should not be honored by the state.

Both chairs sent an open letter earlier to the speaker of the Lithuanian parliament after learning about the plan to name 2021 after Juozas Lukša-Daumantas in the Israeli press.

The webpage of the Lithuanian Jewish Community, www.lzb.lt, asked Chaim Bargman to talk about Juozas Lukša-Daumantas. Bargman, a resident of Kaunas, knows the family of Lukša-Daumantas well. 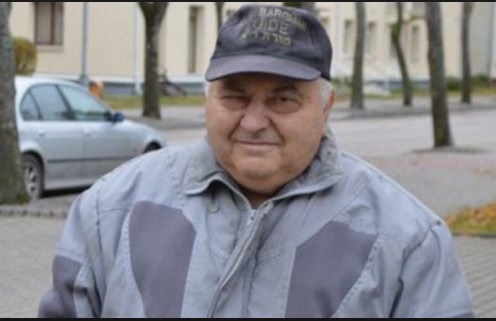 Bargman was born to and raised by a Jewish family in Kaunas and Yiddish was his first language. He still speaks Yiddish. His mother and grandmother were imprisoned in the Kaunas ghetto, then sent to Stutthof concentration camp, and were liberated there by the Red Army, after which they returned to Kaunas.

How did Chaim Bargman come to study the Lukša family?

“There were a number of reasons,” he recalls. “When Lithuania restored independence, many Jewish women in Kaunas received certificates saying they had been at Stutthof, and asked the Union of Deportees to give them membership.

“Lukša-Daumantas’s brother Antanas consented to this membership being presented. Antanas had been a prisoner at a Soviet camp and had come back from there.”

Chaim Bargman calls himself an amateur historian and his research method is to talk to people rather than looking for documents in archives. That’s how he came to have good relations with Antanas Lukša.

When the “Lithuania: Crime and Punishment” magazine in Israel published a list of thousands of Lithuanians alleged to have committed Holocaust crimes, it also presented information about Juozas Lukša-Daumantas.

Juozas Lukša-Daumantas as a young man was sent to prison for distributing brochures against the Soviets, but escaped from prison on the second day of the war, met his brother Antanas and the two of them returned to their parents in the village of Veiveriai. There is a sign there now indicating the Lukša farm. Three weeks later Juozas Lukša-Daumantas returned to university in Kaunas, Bargman recalled.

“Lukša was living in freedom under his own name and was an aide to Vytautas Magnus University pro-rector Barzdžiukas, was preparing the work for his diploma and his brother Antanas was helping him. I think Juozas Lukša-Daumantas was not connected with Jews. No one can confirm he was an LAF member. He doesn’t appear on any LAF list. The Genocide Center should check this. I really don’t know.

“After the war Juozas Lukša-Daumantas became a partisan, fled into the forest and fought for about two years until the decision was made to send him to the West. Lukša-Daumantas crossed over into Poland at Kalvarija, made contact and returned. The second time he left via the Kaliningrad oblast, this time not alone, armed and with a colleague with the code name Mažytis [Little One], they got into Poland, then from there into Sweden. American intelligence decided to train Lukša-Daumantas to send him back into Lithuania. He began training in France at an American intelligence school.

“Following his return to Lithuania Lukša-Daumantas worked as an American spy. They sent him back with the task of reorienting the remainder of partisans for spying. Nowadays this matter is exaggerated, they say he was sent back to increase partisan activities, but this is a lie. Based on that lie, Lukša-Daumantas is being declared the man of the year, but he was really just a spy. He was supposed to form a group to carry out American espionage tasks.

“The KGB found out about this, his radio man Kukauskas was arrested and he said he was working with Lukša-Daumantas. That’s when they decided to set up a meeting.

“At that time in Lithuania and the other Baltic republics there were armed Soviet units deployed and America wanted to discover what sort of units they were. Lukša didn’t manage to create this [espionage] group [before his death].

“The radio man Kukauskas was arrested but he had a ‘control permit.’ What does that mean? The KGB arrested America’s Lithuanian radio man, and wanted to set him down at the key so that he would pass on what they told him to. They couldn’t make another person do it because the keying style would be different and it would be clear this wasn’t Kukauskas. So someone controlled by the Russians needed to be at the key. So the radio men had a control permit, just a brief nuance here. Which shows the radio man operated under the control of the enemy. He didn’t disclose his ‘control permit’ and American intelligence knew he was working under the control of the KGB. So more spies weren’t sent. Kukauskas avoided the gulag and lived to see Lithuanian independence.”