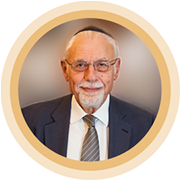 Mr. William Stern was born in Budapest in 1935; after the Nazi occupation of Hungary in March 1944, he and his family were taken to the Bergen-Belsen concentration camp. They survived the War and emigrated to New York in 1952 where Mr Stern pursued studies first at Yeshiva University and subsequently at Harvard Law School.

It was during his stint at Harvard Law School that Mr Stern discovered the many risks and temptations which face a student when he leaves his home environment and suddenly becomes enmeshed in a totally new and different culture. He was shocked at seeing some of his friends shed their tradition and previous way of life in just a matter of months. Having married a young lady resident in London, Mr Stern moved to England in 1960. Early in his career, he established in London in 1971 a kosher canteen which welcomed students of Imperial College, located opposite his offices at Albert Court. This canteen has been going strong for the past 45 years and is presently catering to 30-35 Imperial College students every day of the academic year.

When he expanded his business to Lithuania, Mr Stern discovered the presence in Kaunas of approximately 100 Israeli medical students. He felt that during the 6-year period which medical studies require, many of these students might lose not only their Israeli but also their Jewish identity. In 2010, he established the Jewish Club which grew and developed over the years into the Jewish Centre Kaunas. Its aim is to provide the Jewish students in Kaunas a home away from home and prevent the loss of Jewish identity which otherwise might occur.