Who Are You, Dr. Gumuliauskas? Fat Strokes for a Portrait of the Chairman of the Parliament’s Freedom Battles and State Historical Memory Commission 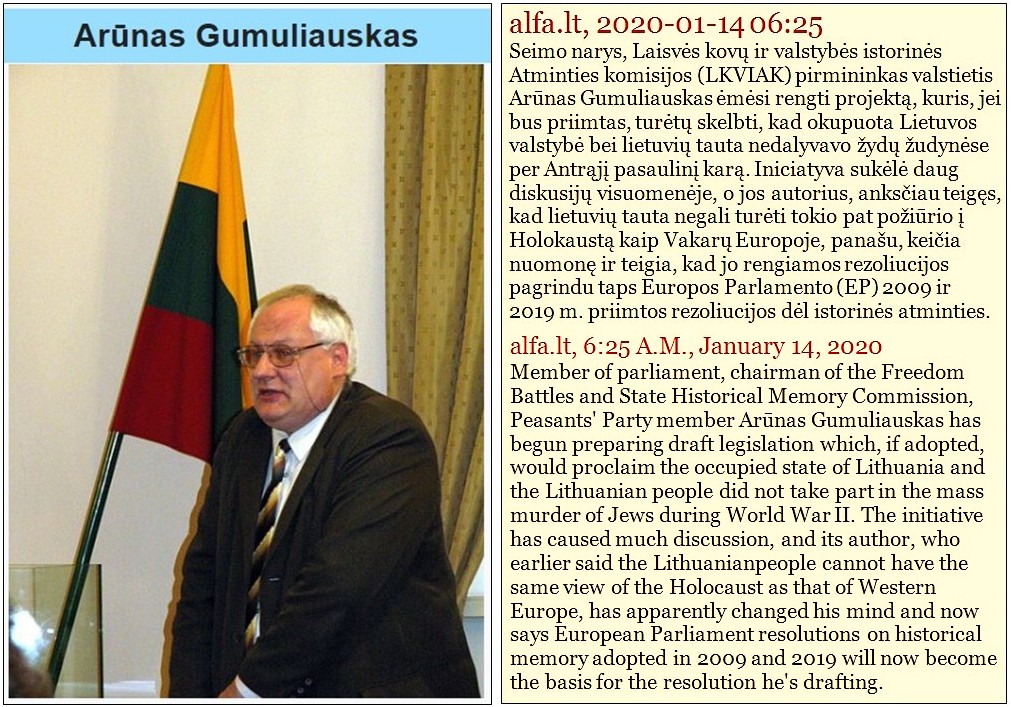 I’m forced to repeat that Radio Free Europe/Radio Liberty called me an Holocaust historian (in an article in Russian). I won’t pretend the appellation isn’t soothing to the ear, but it is not true, unfortunately. That’s why I put the word “historian” in quotation marks after my name.

Unlike me, professor Arūnas Gumuliauskas is a “professional historian.” I’ll explain the use of quotation marks below.

His lucky star rose at exactly 12:59 P.M. on December 28, 2019. That’s the moment when his sensational article appeared on the website 15min.lt, whose daily audience is almost one half of a million readers:

I. a Vilnius native who survived the Holocaust through a miracle, and my wife, who was a prisoner in the Kaunas concentration camp (Ausweis no. 4426), couldn’t believe our eyes.

A few hours later an excerpt from and link to the main article appeared on www.lzb.lt. It appeared in Russian and English there as well, and the Lithuanian Russian newspaper Obzor reprinted the Russian translation.

And so it began… the professional historian’s name began popping up (along with the name of the country, Lithuania) on foreign media, e.g., Jerusalem Post, Times of Israel, Algemeiner and others.

I don’t know why, but the thought consumed me that only an historian who had been inculcated in the methods of Marxism-Leninism could have thought up such a thing. Skipping ahead a bit, I have to say I wasn’t wrong.

Who are you, Dr. Gumuliauskas?

In my semi-humorous autobiography published by the Russian-language international magazine Мы Здесь, I haven’t hidden the fact that, in 1959, I became a candidate for membership in the Communist Party of the Soviet Union, where “the true Marxists” always taught me to “dig” down to the “primary source.”

I began searching for information on Gumuliauskas on Lithuanian wikipedia:

Biography
He was graduated from Vilnius Univeristy in 1981. From 1984 to 1987 he did post-graduate work at this university. [highlighted text:] In 1987 he defended his doctoral thesis “The Activity of the Lithuanian Communist Party in Developing the Dramatic Arts in the Republic (1966-1980)” and received the degree of doctor of the liberal arts.
[end of translation]

It doesn’t appear unusual at first glance: he was graduated from university, worked three years in the job assigned him and then voluntarily, on his own volition and consciously embarked upon post-graduate studies. He defended his dissertation “Activity of the Lithuanian Communist Party in Expanding the Dramatic Arts in the Republic (1966-1980)” and became a doctoral candidate in history.

But that’s just at first glance.

That information wasn’t sufficient for this “Holocaust historian” so I decided to find out what lay beyond the bounds of this brief biography, to wit:

–the name of the faculty or cathedral where the dissertation was written;
–the exact title of the discipline under which it was defended;
–the full names of the opponents;
–the goal of the research and tasks for achieving it;
–the publications where the basic findings were published.

My innate curiosity drew me to the professors’ reading room of Vilnius University on January 16. The staff there quickly discovered the code number for the abstract (F76-3004) of the dissertation in the data base and 35 minutes later that abstract was delivered from the archives.

(Vilnius University isn’t just my Alma Mater, but also where I began my post-doctoral candidacy in 1965 and where I defended my dissertation in 1974.)

Here are the documents which contain the answers to all the questions of interest to me (and I hope to you, too, dear reader):

Specialty: History of the Communist Party of the Soviet Union

Abstract of dissertation for the academic candidate’s acquisition of the degree in history.

The main goal of the work was a multifaceted examination of the activity of the Lithuanian Communist Part in developing the Republic’s dramatic arts (1968-1980).

The following tasks were defined for achieving this goal:

–to show how, using Marxist-Leninist theory, by employing the progressive legacy of the past and under the leadership of the Communist Party of the Soviet Union and the Soviet government, the Lithuanian Communist Party is creating a national theater.

–to investigate the activity of the Lithuanian Communist Party and the republican government in expanding and improving the network of theaters, strengthening their material base, selecting, allocating, preparing and teaching an ideologically significant concept and the civic consciousness of cadres.

–to summarize the organizational ideological work of the republican Communists in forming repertoire and raising the ideological and artistic quality of theater plays. To demonstrate the activities of the main Party organizations and their increasing influence on the creative process.

–to show the activity of the Lithuanian Communist Party in bringing the broad masses to the spiritual values of the dramatic arts, forming a Marxist-Leninist proletariat people’s worldview, [. to show] the significance of theater in the process of internationalizations and [to show] the multifaceted cultural enrichment of the peoples of the USSR.

–to demonstrate problems and errors which have arisen in expanding Lithuania’s socialist theater, revealing the Party’s battle on how to overcome these.

The main points of the dissertation are laid out in these publications:

At my request senior archivist Milda Ladietaitė searched for documents in which the surname Gumuliauskas/Гумаляускас occurred.

She didn’t find any!

I went home and continued my search on the internet. I found the form Arūnas Gumuliauskas had filled out as a candidate for the Lithuanian parliament on the webpage of the Supreme Elections Commission of the Republic of Lithuania, www.vrk.lt Here is a passage from there:

14. In which party or political organization are you (or were you) a member?

He left the entry blank.

In my view, this sort of entry doesn’t allow the voter to access important information about the candidate. To confirm my view, I called the Commission (all its members names and cell phone numbers are available to everyone) on January 17, 2020, and asked: “Does a candidate for parliament have the right not answer item number 14?” Maksimas Reznikovas, a member of the Commission, answered officially: “Yes. According to law he has that right.”

So the professional historian hasn’t violated the law.

But even so, what prevented him from answering that question?

P.S. And for dessert, a quote from an interview with Arūnas Gumuliauskas from the webpage of the Vakarų ekspresas newspaper in 2012. On president Dalia Grybauskaitė:

[translation]
Vakarų ekspresas
“It’s an open secret the president’s ratings are falling. First because of the results of the parliamentary elections where the president took a position which didn’t reflect the voice of the people. The second reason is that some of the facts of [her] biography have been suppressed for a long time. And even today not everything is clear. Is that justice, or injustice… So people have begun to doubt the president.”
[end of translation]

How right the professional historian was:

“…some of the facts of the biography have been suppressed for a long time.”

P.P.S. Yes, the Faculty of the History of the Communist Party of the Soviet Union did teach well how to “bend” with the party line.

Translated from Lithuanian by Geoff Vasil.