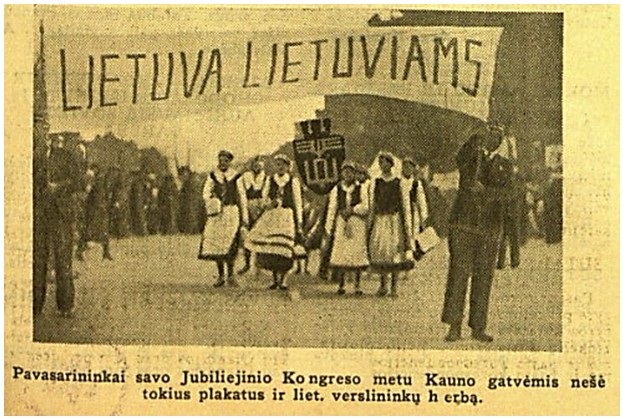 [Photo: banner: “Lithuania for Lithuanians,” inscription: “The Pavasarininkai [literally “spring workers”] carried these kinds of banners and the coat of arms of Lithuanian businessmen through the streets of Kaunas during their Anniversary Congress.”]

This slogan didn’t just appear yesterday or the day before. We see it in the photograph over 80 years ago. And it wasn’t just in some small rural newspaper, but on the first page of the well-known weekly Verslas (“Business”) on July 7, 1938, published by the Union of Lithuanian Merchants, Industrialists and Tradesmen, 1932-1940, Kaunas.

We would like to point out the banners featuring hatred of other ethnic groups were carried by religious youth. The Pavasarininkai were members of the Federation of Lithuanian Catholic Youth, of whom there were about 100,000 in 1940.

It began with a plan to write an article on Jewish life in the interwar period as portrayed in the Lithuanian press. The sources are accessible by everyone: just go to the website of the Lithuanian National Martynas Mažvydas Library, enter the name of a newspaper in the search line, choose the day, month and year and read. It’s not hard work, but it takes a lot of patience and attention.

The search for articles on “Jewish life” in the Lithuanian press unexpectedly led us to shocking publications which we couldn’t ignore and we read them all. It became clear the weekly newspaper Verslas had fertilized heavily the soil out of which the events of June of 1941 grew, when they began murdering Jews on the first day of war.

Before the Germans entered Lithuania.

Dear reader, take a look at the image of part of the front page of the January 20, 1939, edition of Verslas, bearing in mind this was still two-and-a-half years before the Germans invaded Lithuania.

[headlines: “Why the Citizenship of Other Ethnicities Should be Reviewed” and “The Problem of Jewish Emigration Needs to Be Put in Order”]

We see the titles of two articles. The article on the left is attributed to its author K. Šatraitis while the one on the right has no author, and thus is by the editor. Both relate to Jews.

Let’s begin with the editorial: 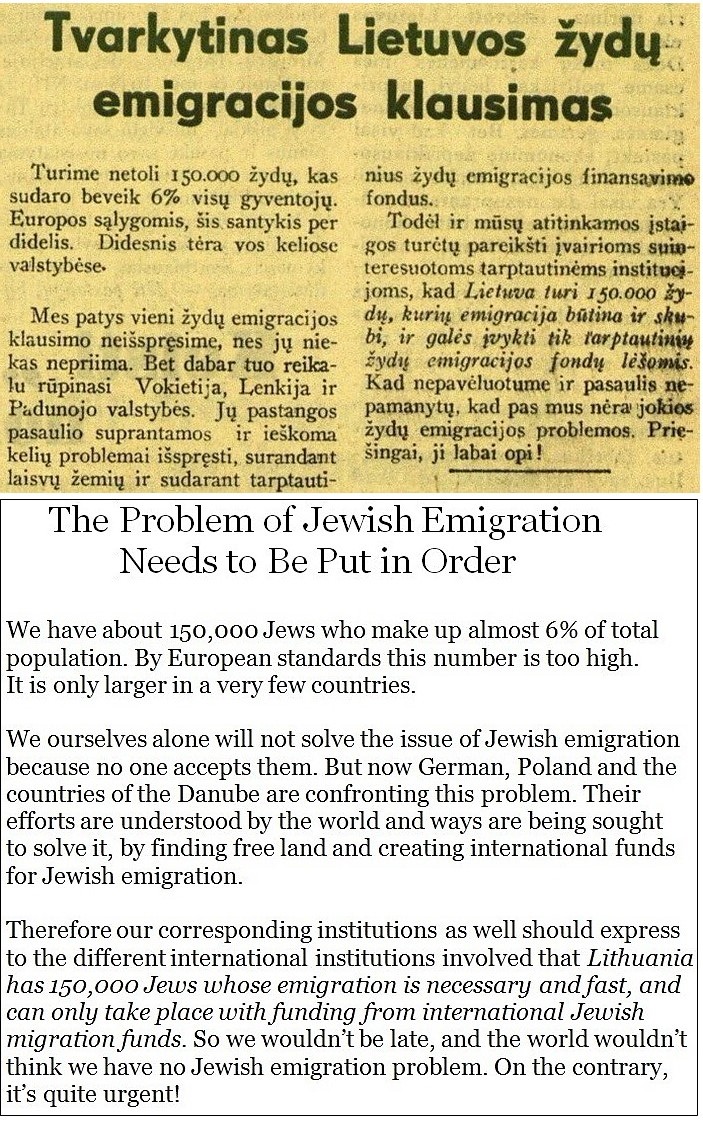 Here are a few quotations:

“We have nearly 150,000 Jews who constitute almost 6% of the total population. Compared to Europe, this number is too high.”

“Lithuania has 150,000 Jews whose emigration is needed, and quickly…”

“So we wouldn’t be too late and the world wouldn’t think we don’t have any Jewish emigration problem. On the contrary, it’s quite urgent!”

So here we see, still three-and-a-half years before the Germans invaded Lithuania, the popular weekly is calling openly for getting rid of 150,000 fellow citizens. Is this not fascism? 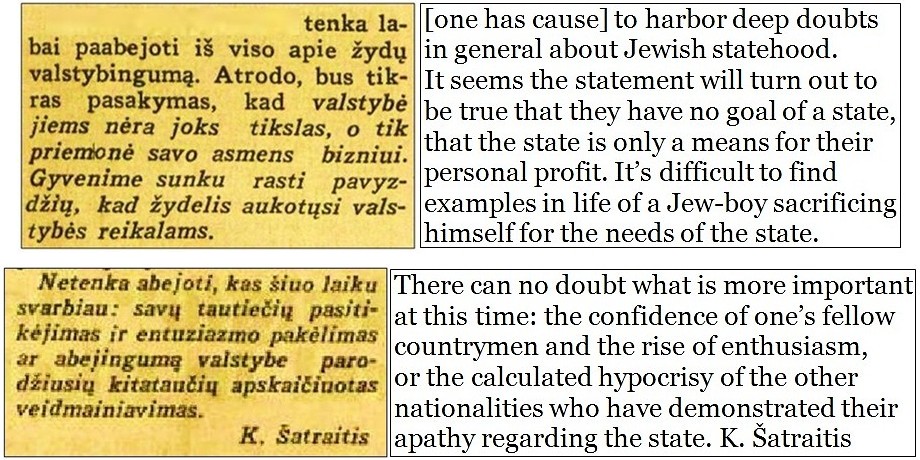 So, to use the anti-libel formula preferred by a certain Lithuanian politician, “who can deny” that Šatraitis’s article isn’t just his personal opinion, but reflects that of a larger group of the like-minded? How large was that group, given the popular Lithuanian weekly devoted the top of its front page to spreading this group’s anti-Semitic philosophy? Isn’t Šatraitis’s thoughts on “Jewish statehood” (“the state is no goal of theirs, just a means towards personal profit”) and his comparison of Jews with other ethnic groups pave the way for the events of June of 1941?

A Dialogue with a Patriotic Reader

Tell us, dear patriot/reader, can a publication be considered anti-Semitic when it doesn’t contain the word žydelka (as in the famous poem by the patriarch of the conservatives) and doesn’t even have the word “Jew?”

No answer? We admit that even very recently we would have answered no.

For your consideration, dear reader, another find, an advertisement called “Let’s only buy from these Kaunas businesspeople” (Verslas, January 5, 1938, p. 5). 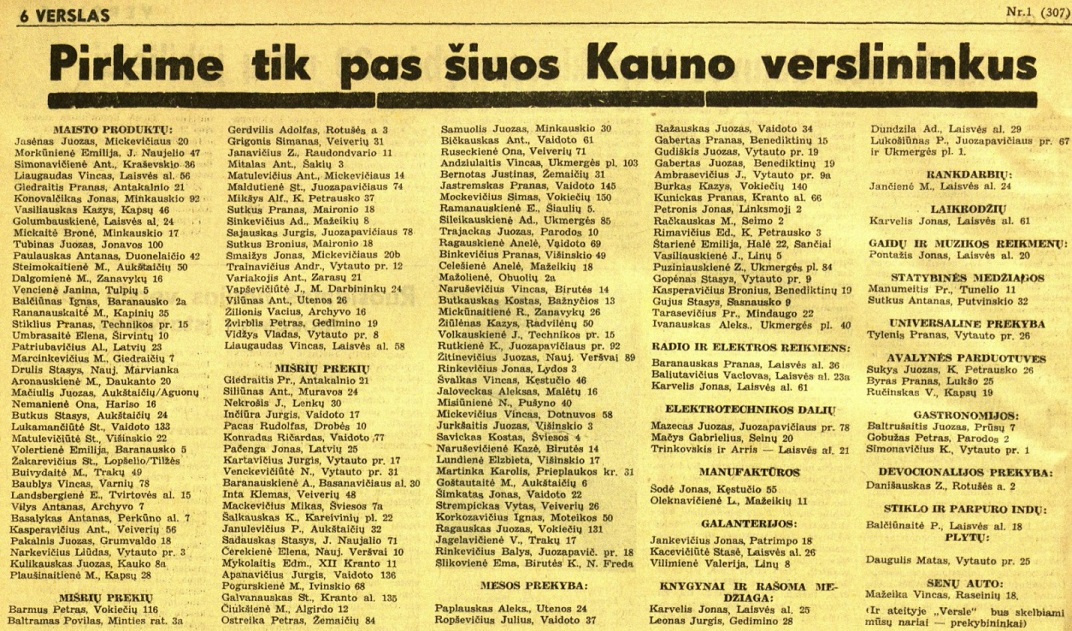 [caption: “Let’s Buy Only from These Kaunas Businessmen”]

At first glance, this list contains the addresses and names of owners of about 150 Kaunas bakeries, mixed meat and factory outlets, clothing, jewelry and other stores. Nothing more.

We hear the question from our angered patriot reader:

“Where in this ad to the authors see even a hint of anti-Semitism? Maybe you should put on glasses before writing this!”

“We are wearing glasses, dear patriot! And that’s why we noticed there is no Jewish name or surname on the list of owners of stores in Kaunas.”

“So what?” our patriot asks. “Do you think the lack of Jewish names is the same thing as the slogan ‘don’t buy from Jews?’ And why don’t you consider whether this is maybe a list of stores selling the highest-quality items?”

We were shocked. Our patriotic reader had driven us into a corner with his questions: this ad truly does not contain the call “don’t buy from Jews.” Trying to confirm for ourselves that our virtual opponent was correct, we continued browsing through this weekly paper, and suddenly… we came across a very intellectual announcement (Verslas, January 20, 1939, p. 2): 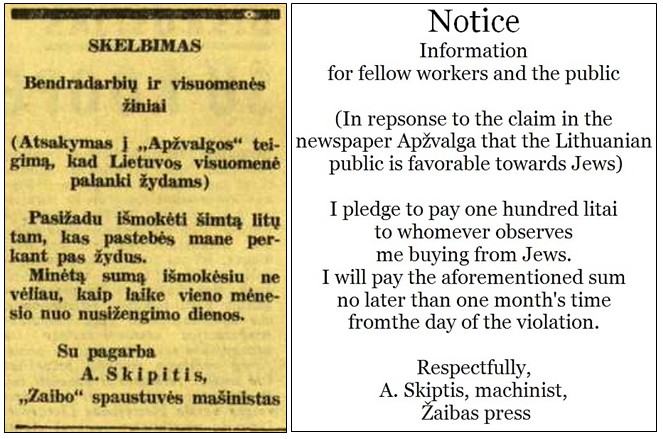 Since Skipitys so disliked the statement in the paper Apžvalga to the effect “the Lithuanian public is very favorable towards Jews,” we are compelled to provide some information about the publication. This is the cover of the first issue:

And the beginning of an introductory article by the editor:

We are almost certain that the “passionate love” the machinist Skipitys for Jews “who live in Lithuania … speak Lithuanian and love the Lithuanian language and their culture” must have found expression in the first hours and days of the war. It is possible the Lithuanian Central State Archive contains documents on his (Skipitys’s) deeds. We will have to take a look. But let’s begin the search at the “wall of martyrs” in central Vilnius.

Now, dear reader, guess which Lithuanian town was called special in 1939? Give up? Until quite recently we didn’t know either. It turns out it was Kurtuvėnai (some sources give Kurtavėnai) about 20 kilometers outside Šiauliai. The Diena newspaper in the section “My Song” called Kurtuvėnai a “special” town because “there are no taverns and not a single Jew there” (Diena, December 10, 1939, p. 9). 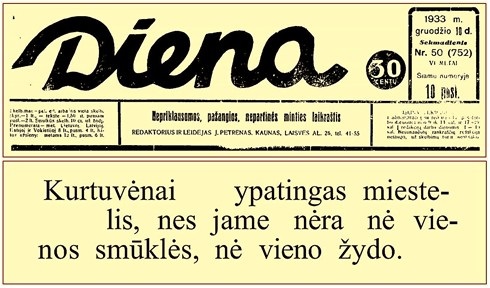 [Diena newspaper, passage: “Kurtuvėnai is a special town because there is no tavern and not a single Jew there.”]

Because of the words “not a single Jew” we are calling Kurtuvėnai a town rather than a shtetl.

Frankly, the newspaper’s claim about the non-existence of Jews in Kurtuvėnai surprised us and we began “digging” on the internet. We discovered information from the first Lithuanian census of September 17, 1923. 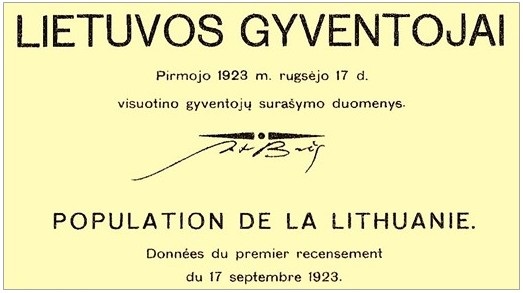 [text in Lithuanian and French: “Residents of Lithuania. Data from first universal census of residents on September 17, 1923”]

Here is part of the 23-page-long table called “Lithuanian population by ethnicity”: 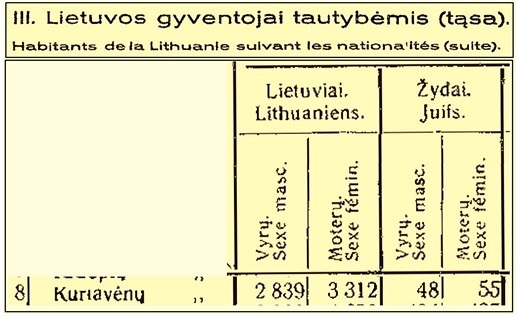 As we see, in 1923 Kurtuvėnai was not a small town with more than 6,000 residents and 100 Jews still lived there. We couldn’t determine why ten years later had they left the town. And of course we will never construct hypotheses out of sand.

A town where ethnic consciousness was so strong

that Jewish settlement was unthinkable

Admit it, dear reader, that you didn’t know the name of this “special” Lithuanian town. We’ll give you another chance to make it up: guess the Lithuanian town about which in 1938 it was written “Jewish settlement was unthinkable.” You don’t know? Well, then, commit this to memory, it was Lekėčiai in the Šakiai district:

Among the many varied towns in Lithuania there was also the happy town. This was Veiveriai in the Marijampolė district:

The Editors of Verslas Loved Jews Very Much

Please note, the words “loved very much” are not in quotation marks. The editorial staff truly did love Jews. How else can we explain the occurrence of the word “Jew” on almost every page of every issue? A good command of arithmetic allows us to assess this love quantitatively, not just orally. Here are some of the more remarkable examples from the issues of the newspaper Verslas published in January of 1939: 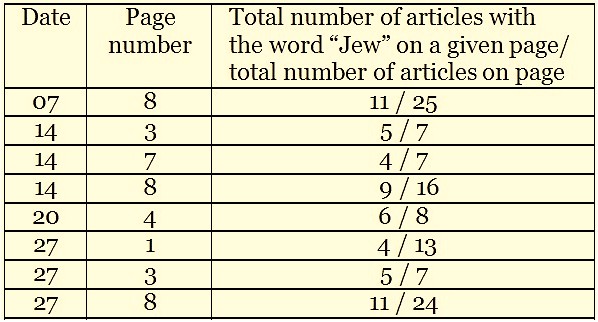 P.S. After this material was prepared for publication, we also found this article:

When we saw the headline, we thought we’d found the reason the Jews had vanished from Kurtuvėnai. Sadly, we discovered they weren’t talking about Kurtuvėnai, but the old shtetl of Smilgiai, about 23 kilometers outside Panevėžys.

P.P.S. The article contains small illustrations, some of which are only a few short words. They are presented in the Lithuanian version of this article without transcription, in order to avoid transcription errors.

The authors would like to thank Vladimiras Vachmanas for his thoughts on the article.