As usual, people gathered on the west side of the railroad tracks in the town of Paneriai or Ponar just outside Vilnius to march the kilometer or so into the Ponar Memorial Complex for the ceremony at the central monument there. This year, however, hundreds of students arrived by train and walked in on the pedestrian overpass over the railroad. Also new this year was the Lithuanian honor guard who led the procession.

Poles, Russians, Lithuanians and Soviet POWs were also murdered at Ponar, albeit in significantly lower numbers than Jews. This year a Polish delegation and Catholic priest awaited the procession at the Polish monument at the entrance to the memorial complex.

President Gitanas Nausėda and prime minister Saulius Skvernelis sent wreaths and messages from them were read out over the PA system.

Miša Jakubas spoke first, in Yiddish, and then translated his message for the Lithuanian-speaking audience. He said those who were murdered spoke Yiddish but could no longer speak for themselves. He recited poetry by Abraham Sutzkever in the native Yiddish and then provided a Lithuanian translation by Rosa Bieliauskienė.

Lithuanian Jewish MP Emanuelis Zingeris spoke about his family’s experience of the Holocaust.

Jewish partisan Fania Brancovskaja and Lithuanian Jewish Community chairwoman Faina Kukliansky stepped up to the podium together. Fania spoke Yiddish and Faina translated to Lithuanian, then delivered her own speech about the dangers of ignoring the small signs of impending disaster. Who agitated for the removal of Jews from the country? Who isolated them? Who shot them? These matters still incur a deep sadness after so many years and after 70 years of ignorance, LJC chairwoman Kukliansky said. She also noted the appearance of seemingly comprehensive books on Lithuanian cities which exclude all mention of their former Jewish populations, larger cities such as Vilnius, Kaunas and Alytus. She quoted the Little Prince, and said if we don’t take care of the little baobab trees now, they could take over the planet eventually.

Vilnius mayor Remigijus Šimašius–the only Lithuanian politician with enough backbone to have the Noreika plaque in Vilnius taken down, along with some straightforward statements from Lithuanian foreign minister Linas Linkevičius–also spoke and was almost the only speaker to receive applause at the solemn event.

Israel’s new ambassador to Lithuania Yossi Avni Levy spoke personally about what Ponar meant to him, a word he knew from childhood. About halfway through his moving presentation the female Lithuanian translator suddenly went silent in the middle of a sentence. She did this several times and it was clear she was crying and at a loss for words. “It is hard to imagine a woman carrying her children with her to their place of death. Children of four, five or ten years old do not want to die. It is hard to imagine people waiting all around here, beyond the trees, living and hearing the shootings and screaming, and knowing that death and the end are coming. When we think of such places we sometimes say, ‘what a horrible place,’ or ‘what an awful place.’ But no, it’s not place which is horrible, neither the trees, nor the sky or the dirt. People, people can be horrible, people who can brutally take the lives of others and murder them just because they are different, just because they are Jews,” ambassador Levy said. He also said he and other Jews have the duty to remember, but do not forgive. “Only the victims have the right to offer forgiveness,” he said.

American Jewish Committee director Rabbi Andrew Baker began his eloquent speech by mentioning the recent 30th anniversary of the Baltic Way protest, when people in all three Baltic republics linked hands to form a human chain to protest the Soviet occupation of their countries after World War II. He said that while it might have been excusable 30 or even 20 years ago to be ignorant of the history of the Holocaust in Lithuania, there was no excuse today, apparently in reference to the complete silence of all Lithuanian politicians regarding Jonas Noreika, with the notable exception of Vilnius mayor Remigijus Šimašius and Lithuanian foreign minister Linas Linkevičius. Rabbi Baker said some Lithuanian politicians actually know better but are using ignorance of the Holocaust as a means to build political capital. He also said it’s impossible for a country to build a democracy without facing its own past.

A member of a Litvak association in Israel also spoke in fluent Lithuanian.

Rabbi Sholom Ber Krinksy and Choral Synagogue cantor Shmuel Yaatom said kaddish for the dead. Various foreign embassies including those of Japan, Great Britain, the United States and the Russian Federation laid wreaths at the monument as well, as did the International Commission to Assess the Crimes of the Nazi and Soviet Occupational Regimes. The Lithuanian minister of culture Dr. Mindaugas Kvietkauskas–a Yiddish scholar–also sent a wreath and delivered a speech. 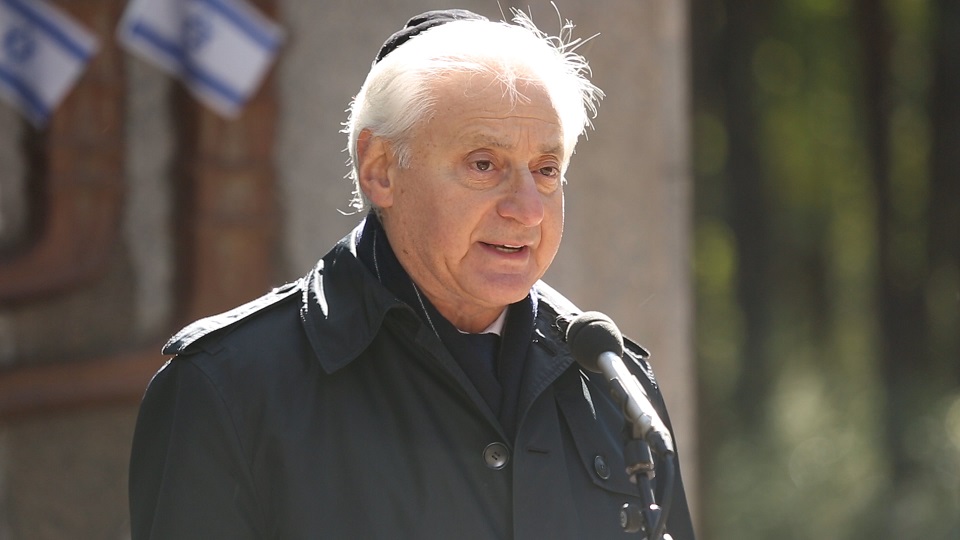 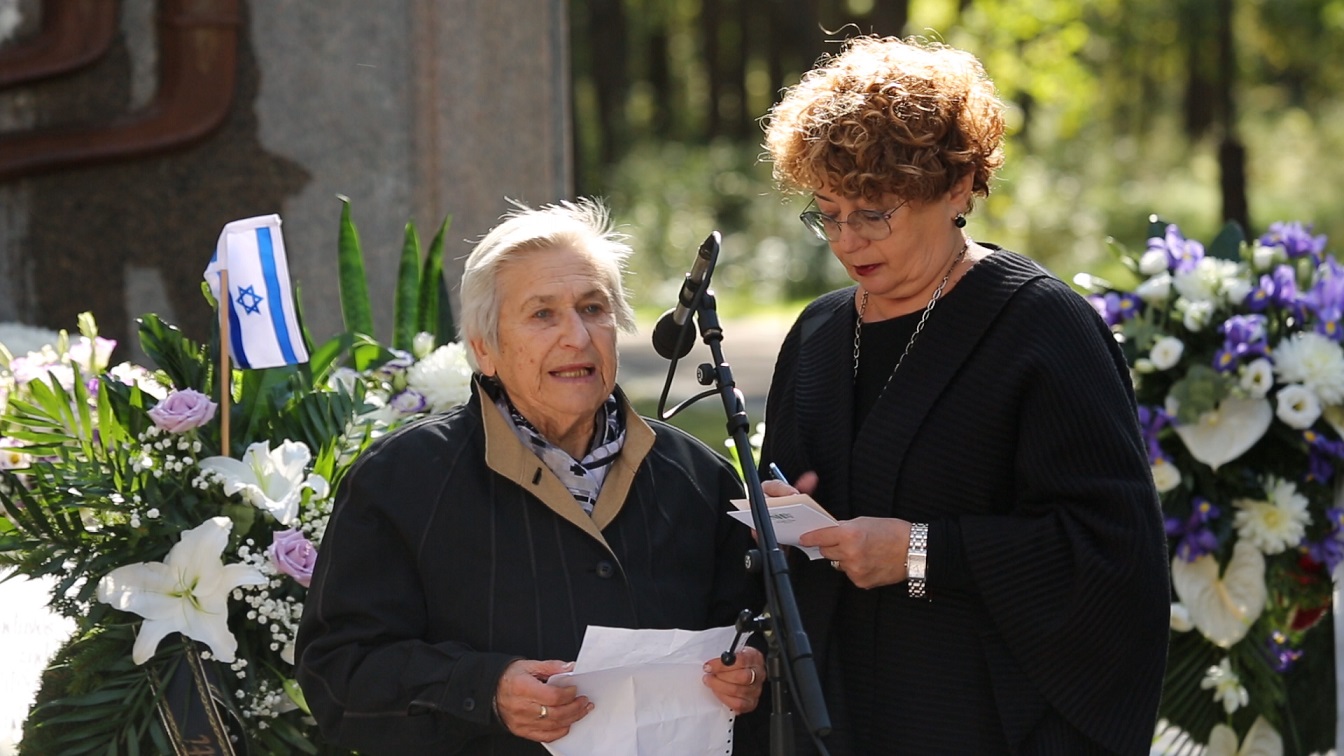 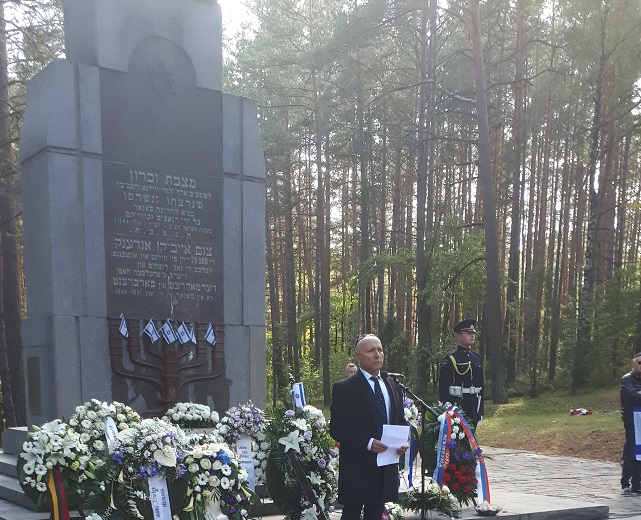