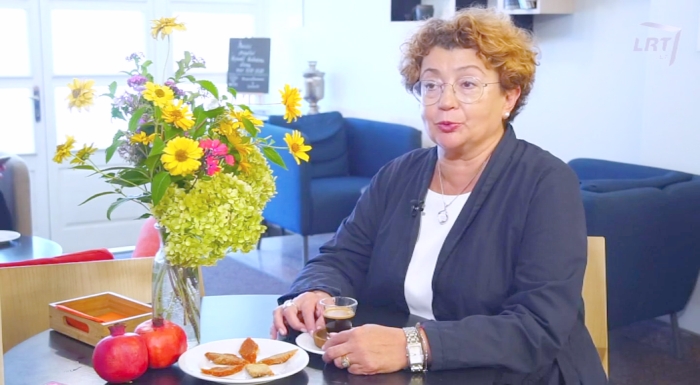 The Lithuanian Radio and Television television program Misija: Vilnija [Mission: Vilnius Region] about ethnic communities and minority cultures in Lithuania featured Litvaks as the program entered its fourth season at the beginning of October.

In the interview with Miša Jakobas, the principal of the Sholem Aleichem ORT Gymnasium in Vilnius, he remarked how much freer children have become in Lithuania, which he said has its plusses as well as minuses. He said he never sees students carrying books during breaks between classes anymore and that the current student body was born into a technological society they know better than his generation does. Hostess and interviewer Katažina Zvonkuvienė and Jakobas discussed the sense of loss and sadness in which the post-war generation of Lithuanian Jews lives and which is sometimes unperceived as such. They also talked about the role of the state in guaranteeing the rights of all ethnic communities in Lithuania and the multiethnic and interfaith composition of the Sholem Aleichem school’s student body.

Interviewed at the Choral Synagogue in Vilnius, Vilnius Jewish Religious Community chairman Simas Levinas spoke about the glorious reputation for scholarship Jewish Vilna once had, and the slow path to drawing back more Jewish families to tradition and to restoring what existed before.

Sholem Aleichem Gymnasium Hebrew teacher Ruth Reches spoke about the durability of Jewish tradition in the face of assimilation. She said rather than grandparents passing on tradition to children, the reverse process seems to be at work now: children are learning Jewish traditions at school and teaching their parents.

Riva Portnaja, the chief chef and baker at the Bagel Shop Café, recalled her childhood in Žemaitija when keeping a kosher kitchen was the customary thing, and spoke about the great demand in Vilnius for Jewish cuisine among Lithuanians.

Lithuanian Jewish Community chairwoman Faina Kukliansky spoke about her childhood growing up among Jews in Vilnius and said surrounded by so many Jews she didn’t really realize she was Jewish. Survivors flocked to Vilnius after the Holocaust and many settled in the Old Town. She said they only spoke Yiddish at home. She remembered her father had a separate knife for meat and the family tried to maintain tradition as much as possible. She also said Litvaks have their own recipes for traditional Lithuanian dishes, replacing pork with other meats.

Translator Judita Gliauberzonaitė said there are many Jews who have assimilated and perhaps she is one of them as well. She recalled how the women in her family prepared the food for Jewish holidays and sometimes didn’t even tell the children what holiday it was.

Amit Belaitė also spoke about tolerance and intolerance and the experience of Jewish young people in Lithuanian society.

The full program in Lithuanian can be viewed below.