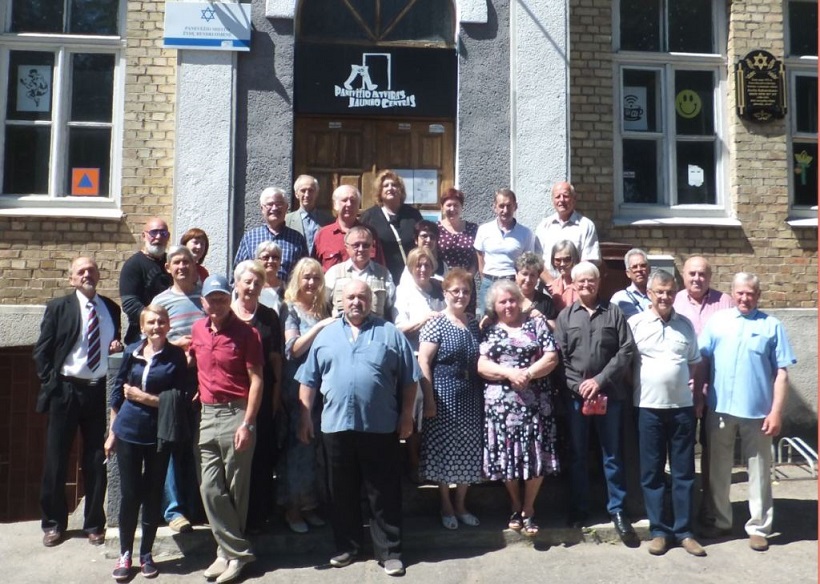 A group of former classmates now living in Israel, Russia and the United States have visited Panevėžys together. They attended a school which began operating in Panevėžys after liberation from the Nazis in September, 1944. Many of the students were Jewish. One such is David Dworkin, who now lives in Miami, Florida. His father was an airman and the commander of a military unit. Another is Semion Zuselevič Šteiman who lived on Ramygalos street with his parents. His children Genadij, Leonard and Jevgenij also attended the school. Vladimir Maksimičiov lived in Panevėžys and is a member of the Panevėžys Jewish Community. His brothers Genadij and Baruch also attended the same school after the war.

Panevėžys Jewish Community chairman Gennady Kofman told the guests the history of Jewish schools in Panevėžys, include the Yavne girls’ religious gymnasium which some of the visitors attended before the war, built in 1922 by Rabbi Josef Shlomo Kahaneman. It was closed down in June of 1940 along with all other Jewish schools, gymnasia and high schools in Lithuania. The chairman also told the guests about community activities and treated them to kosher wine and matzo.

The visit was useful to the Panevėžys Jewish Community as well as the visitors and the chairman said he’s grateful so many people have come and shared new photographs and documents with the community over the last 20 years.

Those wishing to visit during summer should contact beforehand the chairman of the Panevėžys Jewish Community, who might be able to help locate old homes, former teachers and places where parents and grandparents once worked.