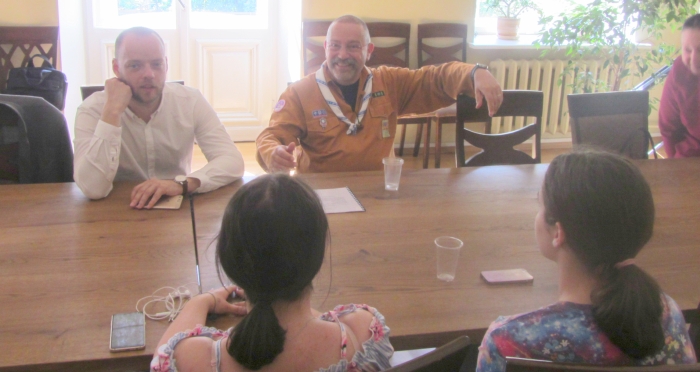 Before the Holocaust there were huge groups of Jewish boy and girl scouts throughout Lithuania. Some groups were religious, others Zionist, others secular. The one thing they all had in common was having fun outdoors, learning together the basic skills and fostering a shared Jewish identity.

Now there are plans to revive the Jewish scouting movement in Lithuania, which now has a mostly aging population of just under 3,500 Jews.

President of the International Forum of Jewish Scouts (IFJS) and member of the board of Éclaireuses éclaireurs israélites de France (EEIF) Alain Silberstein arrived in Vilnius to discuss French cooperation in the Litvak revival with Lithuanian Jewish Community leaders.

Parents of children aged 12 to 17 were invited to attend a discussion at the Lithuanian Jewish Community Wednesday. In an underwhleming show of support, several scouting-age Jewish girls, an interested member of the Jewish community in Vilnius and a handful of others came and heard a presentation by president Alain Silberstein and LJC executive director Renaldas Vaisbrodas.

Silberstein briefly outlined the past glory of scouting in Lithuania, then moved on to the merit badges and counseling in Jewish scouting. He demonstrated a map showing the centers of the Jewish scouting movement in the world, the closest country to Lithuania with an active movement being the Czech Republic. He then summarized scouting by saying the foundation is fun, having fun outdoors with your friends.

A young girl asked about exchange programs and who was sponsoring the revival in Lithuania. Silberstein and Vaisbrodas explained the Lithuanian revival is sort of a pilot program, and if it works the French Jewish scouts want to start an organization in Poland as well, and perhaps in Russia at some point in the future. Silberstein said sending Lithuanian Jewish scouts on exchange programs to France was in the works. Vaisbrodas reiterated Silberstein’s statement the LJC would finance the movement initially in Lithuania.

“But if you want to do scouting, get together with your friends, go out into the forest and have a good time,” Silberstein said, saying such groups form the organic basis for scouting. At this point, he cautioned, older children and parents need to start it, and then pass it on to younger children.