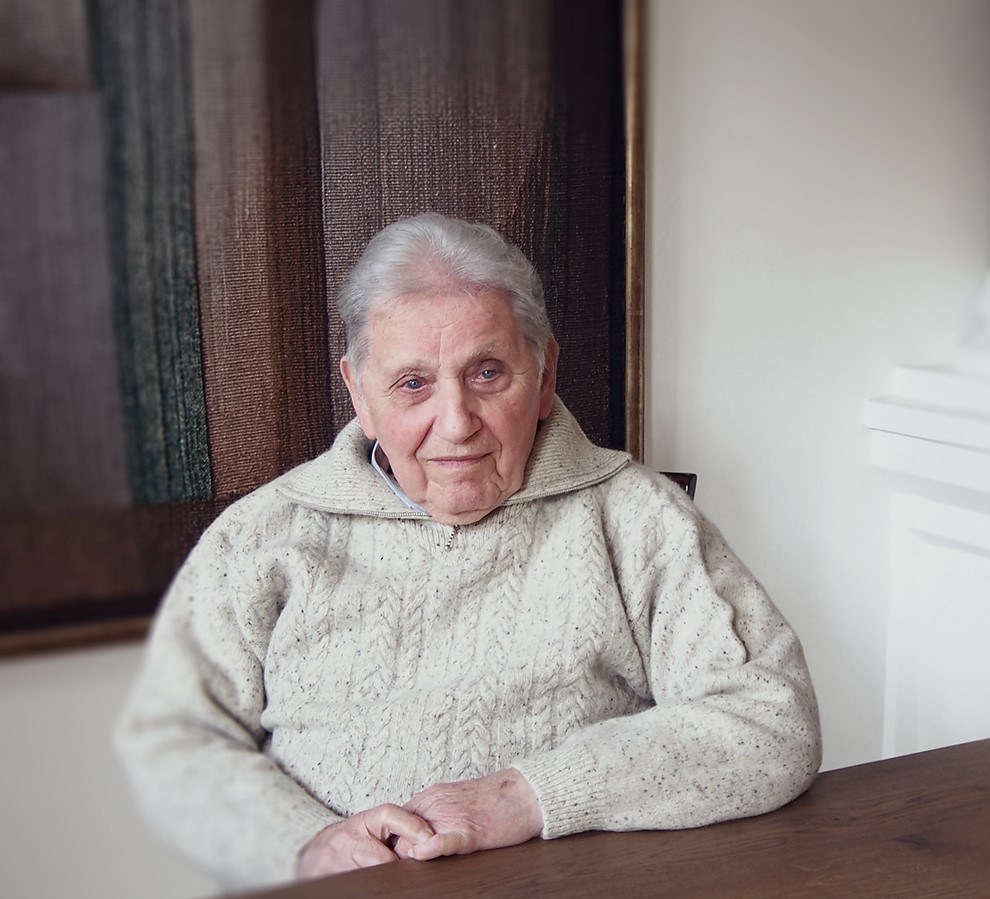 Professor Dr. Adolf Bolotin is an honored member of the Lithuanian Jewish Community and the former chairman of the Vilnius Jewish Community. He also holds a doctorate in physics and mathematics, is the recipient of the Republic Prize, has received awards as a Lithuanian teacher and is a member of the Israeli and New York Academy of Sciences. He is now 92 years old. Most of his life has been centered around Vilnius University. Aspirantura, doctorantura followed by successful defense of his work, earning him a doctorate in quantum physics. He has published more than 250 and “raised” more than 20 doctors of the sciences. He has two children he raised together with his wife. He is highly respected by his friends, colleagues and the Lithuanian scientific community in general.

We spoke with Dr. Bolotin about the Jewish community and Jewish life.

“Very soon my book translated to English should appear in America. I have written a textbook for students on how to solve problems in quantum mechanics, not just about theory, but how to do this practically, with examples. I imposed upon one of my former students who now lives in the USA to translate it. The translation was sent to a publisher I was not familiar with and we received the immediate reply: ‘Great, we will publish it within one year, if you want to change anything.’ The book ‘Solution of Certain Problems in Quantum Mechanics’ by Adolf Bolotin should hit the shelves very soon.

“The publisher paid me, I didn’t pay them to publish it. They came up with the agreement and paid me under very good conditions.

“My wife and I lived together 71 years until her death. I am a widower; my daughter lives with me. I don’t lack anything, I am well taken care of, I get a good pension and I can’t complain about anything. Now I feel it has become difficult to fix the car, even though I have good hands, and I like to work on things because I graduated from university as an experimental physicist and then transferred to theoretical physics later.”

Professor, we often see you at the Lithuanian Jewish Community, even after retiring you visit here all the time. How do you come into the Community, what was it like at the beginning?

“After Sąjūdis [Lithuanian independence movement] began, under independence I entered the Community. I was elected to the board of the Vilnius Jewish Community and at that time the Community was led by composer professor Boris Borisov. He wasn’t in charge long, he left for America and left me to continue his work. I was elected chairman of the Vilnius Jewish Community and served two terms in that post. We were a social organization whose goal was to help members of the community living in poverty. It was a difficult time, many poor Jews came to us. At that time it was older people who came together in the Community, the young people weren’t participating actively yet.

“Now, as a pensioner, I am a participant in the Jewish Community’s Social Department programs, I visit the Community, meet people my own age as old acquaintances, we drink tea and eat pastries and talk about current events.”

What were the tasks of most concern when you were chairman?

“The issue of restitution of Jewish property. As a representative of the exact sciences, I went to the archive and found documents which spoke about the nationalized property, the property seized from the Vilnius community in 1940. I read the decree and law of the Soviet government dissolving the community. All the property taken from the Vilnius community was cataloged in fine detail. I made a copy of that document. All the buildings seized were recorded, how many floors, rooms, plots of land, according to a list with the signatures of a commission, but the property was not assessed monetarily. The money was calculated according to the community’s bookkeeping registry, a sum total was determined. I remember the sum in the bank in the interwar currency of litas, it was 900,000 litai, almost one million. I felt the property seized had to be returned to the community, but not all members agreed, saying the property of the entire community of Lithuania had to be returned. Everyone had the right to expression their own opinion. At that time attempts at restitution failed.

“I served two terms as chairman. After that Simon Alperovitch came to power, he became the leader of the entire Lithuanian community. An international commission was formed for property restitution. The Lithuanian state returned religious property to the Jewish community, assessing its monetary value.

“Formally I was the chairman, but Alperovitch controlled all the money. His deputy was Parasonis. I couldn’t get used to the system which existed inside the Jewish community. At that time I was the scientific director of a large laboratory and it didn’t have these sorts of problems. Because I was having a difficult time managing the community, it was decided not to elect me in elections again, but they didn’t elect Parasonis, either, so he issued a statement saying he disagreed with the board and left very publicly. I speak openly about it, I was difficult for others because I was independent, I didn’t need any money or salary or anything else.”

Does the current situation remind you of the same thing, when there is an attempt to divide the community?

“I’m not sure. The situation arising at the current time is not really dear to my heart… It doesn’t look good that there is a struggle for power in the Vilnius community, some sort of elections were organized in spring in which I didn’t participate. The current chairwoman of the Lithuanian Jewish Community, Faina Kukliansky, is appropriate for her post, she represents the entire community very honorably and is able to visit everywhere, speak and express the community’s opinion. To me personally, this is the sort of chairwoman we need.”

What is the source of the conflict, in your opinion?

“This is about human nature. There was this famous American science fiction writer, a professor of biochemistry, Isaac Asimov, and I read his book ‘The Near East: 10,000 Years of History.’ According to the author, that’s how many years they’ve been fighting over property, over land and goods, just over property, in the Near East. I read the book in Russian.”

You have a lot of experience in life, you know people very well. What solution do you see to put things back in order?

“I think there needs to be agreement rather than bringing shame to the entire community. To agree on who controls the community’s property, and that’s it.
“I was born in Ukraine. When my family sensed in the World War II the Germans were drawing near Kharkov, my parents and I left for Kyrgyzia. I went to school there. I remember they sent us to cut hay at the collective farm in the summer. Every village there had a council of elders, of aksakali. Their experience was highly respected even by the director of the collective farm who controlled the collective farm property. He always used to ask what the aksakali said, 10 or 12 of them would get together, consult, come to agreement and make a decision, and the director had to listen to them and did what they said. I think the time has come for the community to consult with those who have experience.

“They took me out of school into the military in 1943, to officers’ school, where I was graduated, then I was sent to the front and we led the battles in Ukraine, Bessarabia and Romania. I was infantry and I was gravely wounded.”

How did you end up in Vilnius?

“My father was an economist and he received a posting, we moved from Kyrgyzia to Lithuania in 1945. I was a military invalid because of the wound I received and didn’t return to the army, so I entered Vilnius University.

“I became a student at Vilnius University in 1945, and after studies I worked as laboratory assistant, assistant and teacher, and I defended what was at that time called a candidate dissertation, then a doctorate in theoretical physics and I became as assistant professor. Since 1967 I have been a professor at the Theoretical Physics Cathedral of the Physics Faculty of Vilnius University.”

You suggest consulting with those more experienced. Who would they be? Older people, or those who are respected?

“Older Jewish people could play the main role. If they come to agreement, the young people should do as has been decided. I think Faina Kukliansky is older, she is experienced, she understands the needs of the community and she has the right to decide. What should happen is that a group of older members with more life experience, not more than five members, form a council, decide the most important issues and pass their decision on to the operational board. Spiritual life should be differentiated from financial economic and household activities.”

With your experience, do you think it’s an appropriate time to separate the Vilnius community from the communities of the other cities?

“In my understanding, it is not. Vilnius is a community with centuries of history. There should be one LJC in charge of on-going maintenance and financial activities. This is the solution to the situation which has arisen. Economic activity must depend upon decision-making.”

You have worked at all levels of the community, and now you are a visitor to the Day Center of the Social Department and meet with contemporaries, with whom you discuss news and share opinions. How do you like it?

“This Center affects me positively. There is no other community like this in Lithuania. I know what goes on in the Russian community, that’s, to tell the truth, a horror, wars, many organizations. God forbid it became like that among us. There is no internal unity there, people are drowning each other. No, it should be like that in an ethnic community.

“I often recall Vilnius University where I worked. I have lots of former students who come visit me. My entire life I’ve worked in a good collective, the kind you won’t find anymore. I often think, and what would those former famous academicians of Lithuania, the intelligentsia of the older generation, the corpus of Lithuanian professors, what would they say now, how would they judge the current situation? For me they set an example. I think it’s strange when members of the community cannot get along and start spreading rumors, all of this is unpleasant to me. What does it mean? It’s really nonsense to divide a community over finances. I remember when I was chairman of the Vilnius community I was distant from financial affairs, they were taken care of by Lithuanian community chairman Alperovitch. That’s why I say we need a council of aksakali. There should be more openness, more public disclosure, then rumors won’t find a place to take hold. At the current time the community has more opportunities and feels more stable financially. The community building is pretty and comfortable, it has been renovated, they’re taking care of the elderly there and many interesting events are held there as well.