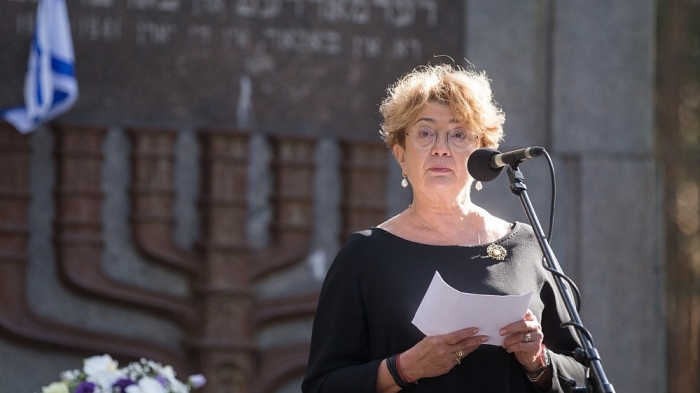 Although the scandal caused by writer Rūta Vanagaitė’s statements on the partisan Adolfas Ramanauskas has subsided, Lithuanian Jewish Community chairwoman Faina Kukliansky believes the tranquility is only temporary. Vanagaitė’s book Mūsiškiai about the mass murder of Jews in Lithuania is soon to appear in English translation. She also enjoys the support of the European Jewish Congress and has many proponents in Israel. In an interview with LRT [Lithuanian Public Radio and Television], Kukliansky said we shouldn’t fear coming scandals.

“I really liked historian Saulius Sužiedėlis’s idea that it’s possible to read a given document or set of documents a number of times and come to different conclusions. It takes special training and understanding to study documents. An elderly grandmother could read the same documents, and while they might be interesting to her, she won’t be able to make sense of them. So, what if a book is written for public relations, seeking profit and to sensationalize readers and listeners?” Kukliansky told LRT regarding the aftermath of the Vanagaitė scandal.

Public relations has covered up the problems of Lithuanians and Jews, painful ones, experienced after the occupation of Lithuania.

There is a certain opinion which has formed in Lithuania about Vanagaitė and perhaps now no one pays a lot of attention to her PR, but following discussions abroad, people there probably think there is some attempt to suppress her personally.

I think when reading books such as Vanagaitė’s Mūsiškai and similar works, a person should be prepared beforehand, having read more books and articles or having learned about it at school.

When people know little about Lithuanian-Jewish relations and the Holocaust read something like Mūsiškai, an explosion occurs. 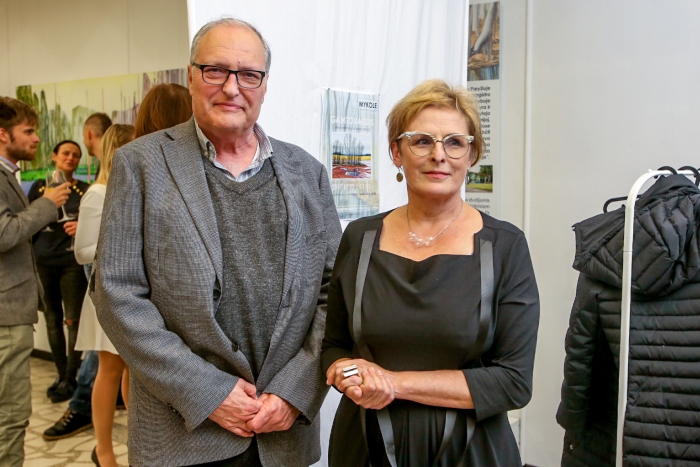 What was the reaction in the Jewish community when it turned out Vanagaitė was not telling the truth when she said Lithuanian partisan leader Ramanauskas might have murdered Jews?

I would not be making a mistake by saying there is not a single Jew in our community who hasn’t been affected by the tragedy of the Holocaust and the painful facts that Lithuanians murdered Jews. So it is completely understandable that some time must pass for the pain to subside.

Personally, even now I cannot understand why my father, who as a child experienced all the horrors of war at the Palanga Jewish summer camp, where only three Jews survived thanks to some miracle, why he used to go on vacation every year to Palanga.

On the other hand, my entire family had many Lithuanian friends and it never occurred to me that this or that elderly Lithuanian might have killed my grandparents.

I think the great majority of the Lithuanian Jewish Community know Lithuanians murdered Jews but don’t believe in any way that all Lithuanians are guilty. There are, of course, mixed Lithuanian and Jewish marriages, both groups interact, work together and many Jews attend Lithuanian schools.

So it’s unfair to make general assumptions and judge everyone by the same criteria?

Speaking about the Lithuanian post-war partisan resistance, one shouldn’t forget that all of us had it pounded into our heads for many years in the Soviet era that all partisans were bandits.

I am convinced we must finally rid ourselves of the old stereotypes and view all suffering objectively, fairly, and that requires education. We are living in the 21st century after all.

There are many facts to be found on the internet, but it takes education to teach a person why this happened.

It’s interesting how we might act today if the government ordered us to shoot Jews, Tartars or other ethnicities. Well, not shoot, let’s say if they ordered these groups not to be given jobs. 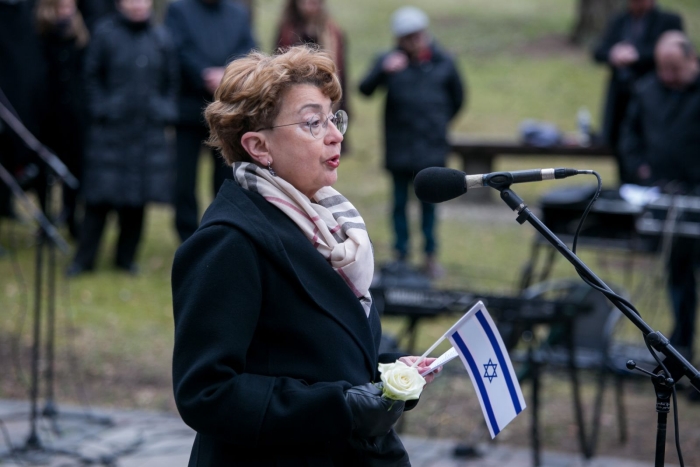 Who knows if anyone could even model such a situation nowadays.

But look how the political parties fight with one another. Such hatred, such anger between them! As if there were some sort of difference in their political platforms.

We constantly remember and honor the victims of World War I and II and of terror, but for some reason we don’t think about contemporary problems, about the little people. We just fight and fight among ourselves. It seems as if the life of people is so absurd…

People and parties fight for power and influence throughout the world. This has happened and always will. But regarding certain painful historical events, is it possible to find general agreement?

Probably, but, as we’ve seen, not one of the governments has done this. They haven’t even accomplished lesser things.

My grandmother was shot in the Vidzgiris forest in Alytus. Once when I was visiting Alytus I tried to ask a policeman on the street how best to drive to that forest, but at first he didn’t even understand what I had asked. So what can we talk about if young people don’t even know about these historical sites in their own home towns?

I still remember as well my trail of tears when together with my father, attorney Samuelis Kukliansky, we trudged up the stairs of all sorts of government institutions trying to get a de-rehabilitation law in Lithuania. It did happen. But who knows if the de-rehabilitation was carried out fully. Even the department formed in the Office of Prosecutor General for doing this has been abolished.

What do you think, is it possible that Lithuanians and Jews aren’t able to get along up to the present time because there were among Jews those who loyally served the USSR regime and deported and signed death penalty verdicts for Jews and Lithuanians? One such was KGB officer Nakhman Dushanski who gave his blessing to the deportation of well-known pre-war Kaunas doctor Isaak Levitan and his wife, and wrote the scenario for the execution of Ramanauskas.

But Dushanski didn’t sign the documents for my family’s deportation, because he was classmates with my mother’s brother.

So how do we find the simple, human answer to the question of why Israel, which constantly seeks justice, itself hasn’t prosecuted people such as Dushanski, and hasn’t turned them over to the countries where they committed crimes.

It’s hard for me to answer that. I don’t know. Perhaps there is the belief that all means are justified because genocide was carried out against Jews.

On the other side, many Jews were deported from Lithuania and survived all the trials of Siberia and the camps. When they returned to Lithuania, they didn’t find any of their people.

If 70 years after the war we are still talking about this, that means it is still painful, it hasn’t been forgotten.

I still remember how my cousins and I used to play a game in the home of my only surviving grandmother in the Vilnius Old Town. We’d play who looked least like a Jew and what we’d do if the Germans came back. I’m not sure why we played this game, since our parents never told us about the mass murder of Jews.

We used to talk like this: “Well, if one of us is named Alexander, because his mother wanted to protect him that way, nothing will probably happen to him, but if the Germans come it will go very badly for Ammon and Natan.”

When did you learn and understand what had happened to the Jews in Lithuania?

Although our parents took us children to Ponar and to visit their rescuers, I didn’t understand the tragedy which happened to the Jews for a long time. When I was in eleventh grade I met deportee, dissident and historian Vytautas Raudeliūnas and he opened my eyes. 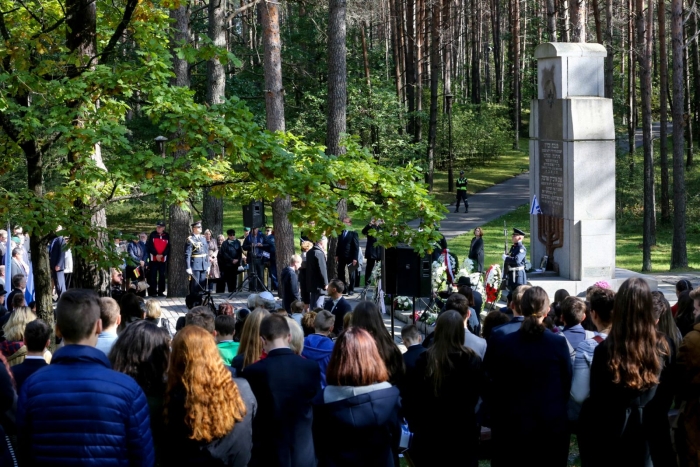 My father only spoke up about the Holocaust after independence when numerous Holocaust perpetrators were rehabilitated.

That’s when I learned of the Simon Wiesenthal Center and Efraim Zuroff. Then I also learned the stairs up Tauras Hill were made of Jewish gravestones. The time had come for me to learn about some things.

Why do you think Zuroff is so controversial despite the important work he does?

I think he earned this reputation because of his contentious personality. Perhaps he acts that way in order to draw attention to himself. Furthermore, he is religious, so it’s not easy for him to come to terms with many things.

I have to admit that on many issues we held different opinions right from when we first met.

Because I’ve always held that all problems need to be solved officially and legally. I thought that if Zuroff wanted to accomplish something in Lithuania, a Simon Wiesenthal Center office needed to be established in Lithuania, they needed to work with prosecutors and take part in legal proceedings. Who needs to be enemies with everyone?

On the other hand, if education minister Jurgita Petrauskienė continues to ignore my telephone calls and doesn’t solve the problem regarding the reconstruction of a synagogue in Kėdainiai, there needs to be a scandal.

Six-hundred-thousand euros have already been received from European Union structural funds for reconstruction of this synagogue. It’s exactly the same story as when twenty-five years ago a building which had belonged to the Art Academy was given to the Kaunas Jewish Community. Due to some bureaucratic misunderstanding, we cannot take over that building till now.

What does the Education Ministry have to do with the synagogue in Kėdainiai?

I don’t know, but for some reason the Ministries of Culture and Finance referred me to the Education Ministry.

What do you think, is it still some sort of utopia to think some day some scholar will publish a comprehensive work based on sources on the shooting of the Jews in Lithuania and about how Lithuanians and Jews suffered at the hands of Jewish KGB agents? Wouldn’t such a book be a crucial step towards reconciliation?

I understand Saulius Sužiedėlis has already written such a book. But I often think about how I should talk about the philosopher Antanas Maceina, held in esteem by all Lithuanians, knowing what an anti-Semite he was. Or is that just him speaking in a single letter and uncharacteristic of him?

I don’t have a clear answer either about the beliefs of Jonas Šliūpas. Was he really anti-Semitic?

I do know one thing: we, Lithuanians and Jews, must resolve our mutual disagreements. We cannot seek revenge and blood.

I do not, however, believe that the march which took place in Molėtai to commemorate the Holocaust is somehow worth more than my trip to Katkiškės outside Veisėjai where twenty-nine of my family members were murdered, and from where only three Jews survived: the cartoonist Ilja Bereznickas, my secretary and I.

I don’t need a parade and pageantry to experience my own pain. I don’t think my parents would have need that either.

Having survived such a tragedy, how did your family get along with Lithuanians? Didn’t they feel the need to take revenge?

My parents had many friends from the Russian intelligentsia and among Lithuanians. I have never, ever sensed even the slightest desire to take revenge for the loss of relatives and property. I don’t know how to explain that. I guess a person has to set their feelings and experiences free. It’s impossible to suffer your whole life. You have to live.

You probably have a vision of what needs to be done so people of your generation and the younger generation live to see reconciliation between Lithuanians and Jews.

Our Community strives to be as open as possible to others and we consider ourselves Lithuanians of Jewish origin. I don’t know what other Community members think, but personally I don’t need a law on ethnic minorities because I know I am protected by the Lithuanian constitution, the criminal code and other laws.

In striving for reconciliation, chapters about the history of the Jews of Lithuania have to be included in Lithuanian school history textbooks. My grandson is learning and reciting Shakespeare sonnets mainly because they are part of school curriculum. That needs to be done with Jewish history as well, teaching about how Jews came to Lithuania, how they lived and the reasons the Holocaust happened. 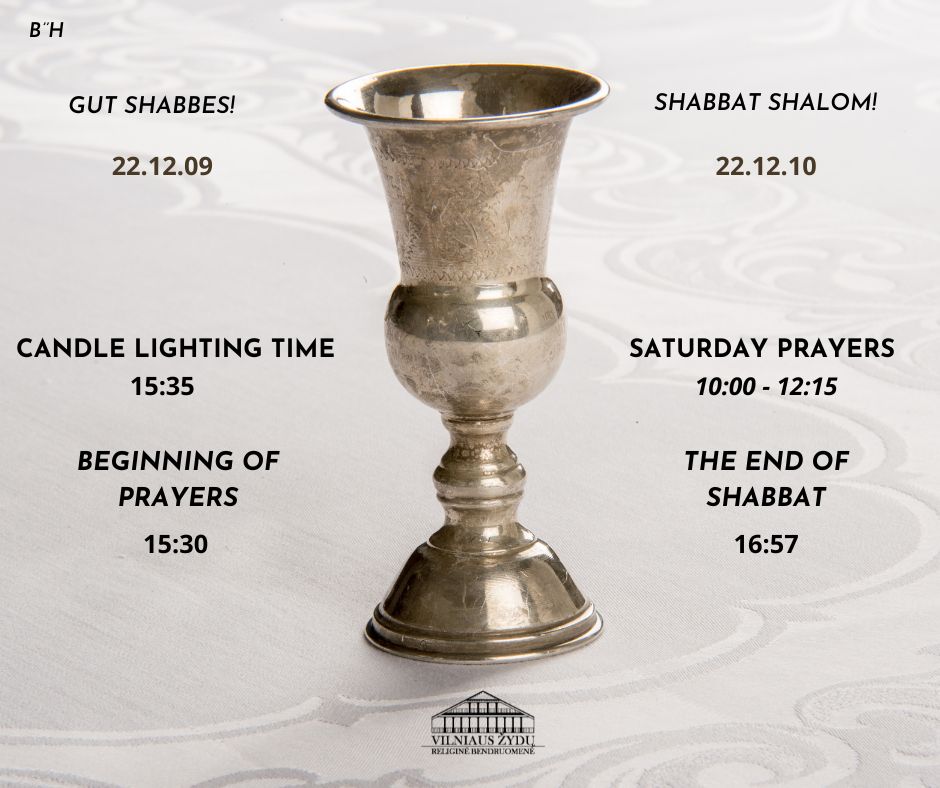