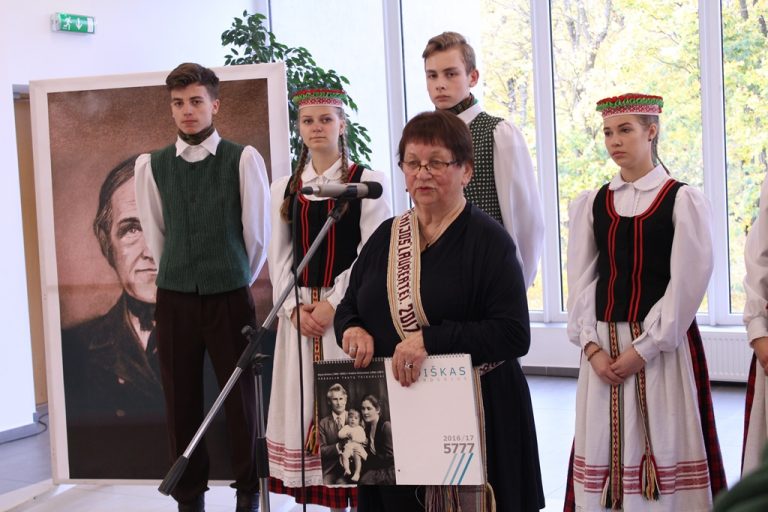 The 28th annual Laurynas Ivinskis Prize ceremony was held in Kuršėnai, Lithuania with live Lithuanian folk music and a performance by the Fayerlakh ensemble.

The theme of the LJC calendar for 5777 was Lithuanian rescuers of Jews. It featured interwar president Kazys Grinius and wife Kristina on the cover, both Righteous Gentiles. Each month featured more than one story of rescue.

Laurynas Ivinskis (1810-1881) was a 19th century calendar maker whose agricultural calendars were also more text than calendar, and were for a period of time forbidden by Russian authorities because they were written in Lithuanian using the Latin rather than Cyrillic alphabet. His almanachs included stories and parables in pre-standard Lithuanian.

According to the Cultural Center of the Šiauliai regional administration, the LJC calendar scored highest according to established contest criteria. Šiauliai regional administration head Antanas Bezaras presented the prize of €290 and a prize certificate to Danutė Selčinskaja, the head of the Department of the Righteous at the Vilna Gaon State Jewish Museum who was contracted by the LJC to implement the concept conceived by Maša Grodnikienė. The editor was Jovita Stundžiaitė and Jūratė Juozėnienė was the designer with the religious component–holidays, times for Sabbath, etc.–by Rabbi Shimshon Izakason and Rabbi Kalev Krelin. AN English-language edition was translated and edited by Geoff Vasil, for distribution to foreign embassies and ambassadors in Vilnius.

The Ivinskis Prize ceremony was held in an unusual fashion to honor Lithuanian Jews. It began with the usual visit to Laurynas Ivinskis’s grave in the old town cemetery in Kuršėnai, where flowers were placed and candles lit, after which Alvaidas Bernotas performed several folk songs and Laurynas Ivinskis Calendar Museum director Sigita Lukienė spoke about the man. After the traditional component, the prize ceremony moved to the Padarba forest to honor victims of the Holocaust. At the mass grave where the Jews of Kuršėnai were shot, flowers were laid and candles lit beside the monument as well. All participants also laid stones with inscriptions of the names of the victims on a Lithuanian map formed of arranged stones at the memorial. Jewish prayers for the dead were intoned and Lithuanian historian Rolandas Tamošaitis spoke to the assembly. Afterwards the ceremony moved to the Cultural Center of the Šiauliai regional administration where winners were announced. In addition to the prize and certificate, Šiauliai regional administration chief of administration Gipoldas Karklelis presented a small gift to Selčinskaja and Lithuanian parliament speaker aide Ada Grakauskienė spoke. Holocaust survivor Sulamit Lev was also presented keepsake gifts, flowers and an ethnic Lithuanian sash.

The runner-up to first prize was the Calendar of Cultural Events of the Šiauliai Region, whose authors Laimutė Varkalienė and Zigmas Ripinskis were presented small gifts.

Representatives of the Šiauliai Jewish Community thanked the organizers, winners and attendees.

More about the ceremony in Lithuanian here.