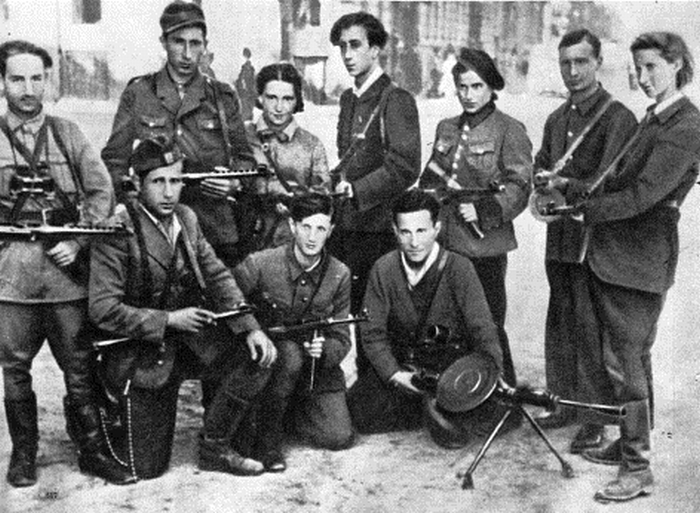 by professor Pinchos Fridberg, for the web page of the newspaper Obzor

I am writing before the event: a half year remains until the birthday of the famous figure, but decisions need to be made now.

Don’t look for legendary Litvak Abba Kovner on the Lithuanian-language wikipedia, the hero of Jewish resistance to the Nazi occupation in Lithuania, the fighter for Israeli independence, the famous poet and writer, has no entry there. There are entries in the Hebrew and English wikipedia, in the Polish and Russian, but not in Lithuanian.

He apparently doesn’t merit a wikipedia page in Lithuanian. Every people has their heroes. On March 14, 2018, Abba Kovner, z”l [zikhrono livrakha, of blessed memory], turns 100.

I hope the Lithuanian Jewish Community remembers this significant event.

Abba studied at the Tarbut gymnasium, the building at Pylimo street no. 4 in Vilnius which now houses the Lithuanian Jewish Community. I therefore think “God Himself” commands us to hang a memorial plaque (in Lithuanian, Yiddish and English) to his memory in the foyer of this building. I foresee a question arising: why in the foyer and not on the outside of the building. My answer: I don’t want to see the issue of a memorial plaque get bogged down in endless negotiations.

Litvak Khona Garb, doctor of mathematics and physics at Tel Aviv University, sent me a link to the radio program and a short excerpt translated from Hebrew about Abba’s “ghetto period.” I commend the reader’s attention to this text:

At the end of 1941 Abba Kovner with 17 comrades hid at the Catholic Dominicans nuns’ monastery directed by mother superior Anna Borkowska. At the nunnery Abba Kovner wrote his Manifesto, an appeal to the prisoners of the Vilnius ghetto. Two main theses were elaborated in it:

Hitler is planning to exterminate all Jews in Europe, and Lithuania will become the first victim of this devilish project.

Guests on the radio program emphasized Abba Kovner was the first to state this accusation in writing. No one in the West at that time was prepared to believe the Germans wanted to murder all Jews just because they were Jewish.

After announcing the first thesis, Abba Kovner called on all ghetto residents to fight fascism, to fight to the last breath and the last drop of blood.

At the time the Manifesto was being written, not more than 20,000 Jews of the original 60,000 Jews in the Vilnius ghetto survived, the others had been murdered.

After writing the Manifesto, Abba Kovner and his fellow Jews decided to return to the ghetto to start the battle against the fascists. Mother superior Anna Borkowska and the other sisters tried to persuade them to remain at the monastery where it was safer, but Abba and his fellow soldiers were eager for battle.

On the night of December 31, 1941, into January 1, 1942, Abba read his Manifesto to ghetto residents and called upon them not to go like sheep to the slaughter, and to finally enter into battle against the fascists. Anna Borkowska came to the ghetto gate and asked Abba to accept her into the unit in the ghetto as well in mid-January of 1942, but Abba talked her into remaining at the monastery to help get weapons for the ghetto fighters. She did acquire several grenades and revolvers and provided them to the ghetto fighters. The monastery was shut down and mother superior Anna was arrested and sent to a camp near Kaunas in September, 1943.

In 1984 the Yad Vashem Museum in Israel recognized Anna and six Dominican monastery nuns as Righteous Gentiles. Abba Kovner personally presented the medal to Anna, who had flown to Warsaw especially for the event.

Anna Borkowska and Abba Kovner at the medal award ceremony in Warsaw.

After Itzik Vitenberg’s arrest, Abba Kovner became commander of the Vilnius ghetto resistance. Under his command a group of 600 prepared for battle against the fascists. It’s amazing such a young man (in 1942 Abba turned 24) was able to bring together the different political movements in the ghetto, from Communists to Zionists. All the guests on the radio program spoke especially about this fact. This kind of unity in the Jewish anti-fascist movement existed nowhere else, not even in the Warsaw ghetto where each party had its own contingent of fighters; during the uprising they were unable to coordinate their activities.

After the quelling of the uprising in the Vilnius ghetto, surviving fighters exited via the sewer to Rudniki forest where they formed a partisan unit who successfully fought the German occupiers right up until the liberation of Lithuania when the Red Army arrived.

After World War II, Abba Kovner secretly went to Israel where he fought in the War of Independence in the legendary Givati Brigade.

In Israel there are plans to publish a collection of Abba Kovner’s works and to hold various events on the 100th anniversary of his birth.