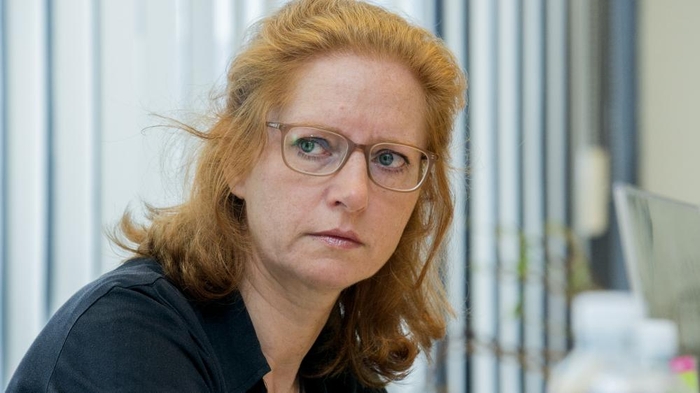 Reglindis Rauca accidentally learned the true story of her grandfather and it changed her writing and her relationship with her family. Photo: Romas Jurgaitis/Lietuvos žinios

Reglindis Rauca, writer, actress and granddaughter of Helmut Rauca, the butcher of the Kaunas ghetto, is visiting Lithuania. She learned of her grandfather’s war crimes by accident in 2003 when she was searching the internet for information about her maiden name.

“It was completely accidental that I learned the true story about my grandfather Helmut Rauca. The discovery of these horrific crimes and their significance caused great shock and became an important theme in my life and work,” Reglindis Rauca said.

She met Vilna Gaon State Jewish Museum director Markas Zingeris in Vilnius. The latter also wrote about Helmut Rauca in his novel “Grojimas dviese” [Performing as a Duet] published in 2002, describing him as a fanatic servant of the Third Reich and the perpetrator of fantastic crimes.

“Reglindis Rauca is a brave woman who has considered these heavy issues and was driven by them to travel to Lithuania. She visited the Ninth Fort in Kaunas and other World War II and Holocaust memorial sites. I realized both us were painfully affected by him, just in different ways,” Zingeris said.

Helmut Rauca was responsible for the murder of ten thousand Jews from the Kaunas ghetto.

“My mother stood paralyzed before the senior SS sergeant, unsure if she would be selected for life or death. Fascination, surprise, enchantment made me meet his granddaughter Reglindis Rauca. At the same time I felt an inner reluctance. These events are too painful for a consciousness formed in peacetime to really understand,” Zingeris commented during the meeting.

Reglindis Rauca is a German writer, actress and lecturer and was invited by Arkadijus Vinokuras, author of “Mes nežudėme” [We Didn’t Kill], among other works, to visit Lithuania. During her visit she told the story of her family, which she herself only learned relatively late at the age of 36.

“When I married I kept my father’s surname. Searching on the internet I found my grandather’s surname as well. I already knew about the city of Kaunas, the year was 1941. The sentence ‘Helmut Rauca was responsible for the death of 10,000 people’ shocked me.

“I went into the kitchen, I was crying and shaking. I acted carefully, I tried to ask my father if he knew anything about this. But he maintained the position my grandfather was a passive official and participant. He doesn’t want to admit the truth even now. So further conversation was impossible,” Reglindis Rauca recalled.

The writer began to explore the topic of the Holocaust in her articles and books after learning of her family’s involvement. Her first novel “Vuchelbeerbaamland” [Land of the Mountain-Ashes] appeared in February of 2008.

Her family’s reaction to the book was a letter consisting of four lines: “We thank you for your work. As long as you’re proud of it, you can just not show yourself around here anymore.” The female writer lost contact with her family for four years.

“Now we’ve restored [relations] again, but we avoid this topic. Before, my parents only knew that grandfather had done something during the war. His criminal activity was revealed to them when he was deported to West Germany. Of course it quickly became a taboo topic. But I have become much closer to the topic of the Holocaust. They say a person is affected by that which concerns him directly,” Rauca said. She and Markas Zingeris are both writers who have written about the same person in their books.

In December of 1950 Helmut Rauca fled to Canada. After spending six years there he became a citizen. Rauca didn’t change his last name, but changed his first name, exchanging Helmut Albert Rauca for Albert Rauca. This was enough to keep him from being discovered for a great many years.

In July of 1982 West Germany issued an arrest warrant for Helmut Rauca and sent an extradition request to Canada. The former Gestapo officer was accused of sending 11,584 people to their deaths from August 18, 1941, to December 25, 1943. He was extradited and flown to West Germany in May of 1983. He died of cancer in October that year still awaiting trial. 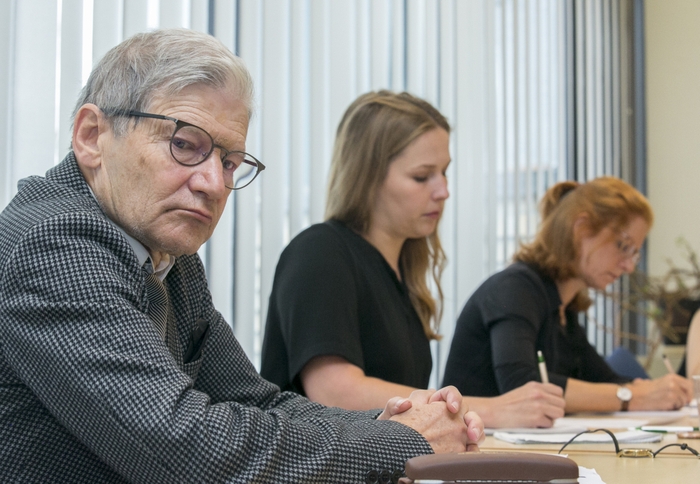 Reglindis Rauca says she knows little about her grandfather, she never met him and his psyche remains unknown to her. That’s why she’s following in his footsteps, journeying to Lithuania as if travelling into the past.

“My father quoted several sentences from letters from him, I only know little bits, that he was an idealist, a faithful ideological servant. It’s difficult to form a picture from the description of his life, so I looked for footnotes. The English word ‘butcher’ says a lot. He was brutal, insensitive and as I’ve found out now also eccentric. … He is a distant person to me, it’s hard to comprehend that he’s my grandfather,” Reglindis Rauca said. 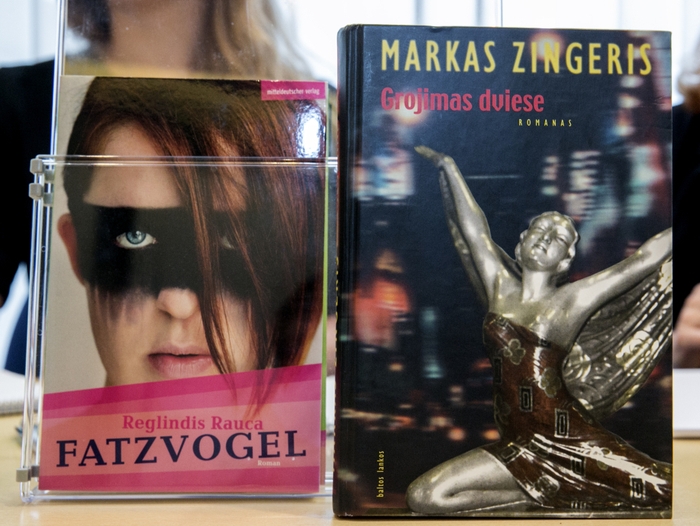 Reglindis Rauca was born in Plauen, East Germany, in 1967, later moved to Dresden and Berlin, then Düsseldorf and now lives in Potsdam. When her grandfather lived in Canada she used to receive photographs from him. “He looked exotic to me. I didn’t know why he was living in Canada. They said they needed people with healthy hands and minds there. I would be dubious about the healthy minds bit,” the German writer said.

Descendants United in Search for Truth

Rauca and Zingeris are both writers who have both written about the same man in their books. Zingeris learned about Helmut Rauca from his family, while Reglindis Rauca did not. Reglindis Rauca in her novel Fatzvogel tells the story from a different perspective: “My grandfather selected them, ordered them taken to the shooting site, ordered the shooters to shoot and, I don’t know, maybe did the shooting himself as well. But 10,000 people, of which more than 4,000 were children–it’s impossible to imagine. Perhaps only a 1,000 people fit in the Dresden Drama Theater. I am the granddaughter of the murderer of a great number of people.”

Reglindis Rauca asked Markas Zingeris how he felt upon learning Helmut Rauca’s granddaughter was coming to Lithuania to look for answers.

“My feelings were mixed. I don’t know if we would have met if Reglindis Rauca weren’t a writer, an intellectual seeking the historical truth so persistently. We share a belief in the value of the open and sincere exchange of ideas, a belief in the power of literature and in the truth, which a human being needs just as he needs water and food,” Zingeris said, drawing a distinction between the guilt which war criminals must assume for their actions and the moral responsibility their children and relatives feel. 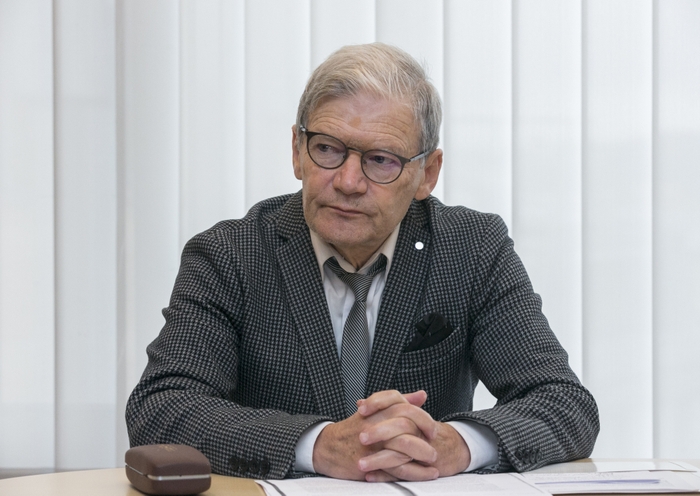 The writer Markas Zingeris in his 2002 novel “Grojimas dviese” also wrote about Helmut Rauca as a fanatic servant of the Third Reich and the perpetrator of barbaric crimes. Photo: Romas Jurgaitis

Zingeris asked Rauca if they taught about the Holocaust in German schools when she was a child.

“We heard a lot about fascism, we watched films during different lessons, there was required literature and we discussed a lot. Hitler’s fascism, we were taught, was the most horrific regime ever, trampling human rights and human dignity. The slogan, never again to war, suffused all levels of society,” she explained.

Suspicion and ambivalence hound the family who don’t want to be associated with the Nazis, but it comes up anew every time the author writes about her grandfather.

“We, the descendants of criminals, cannot call ourselves victims. But this trauma leaves traces. The important thing is always to seek the truth and to pass that knowledge on to future generations. At the Ninth Fort I realized our time is short and limited. Witnesses to the events of the past are slowly dying away, so our descendants must know everything about it, so that they can create and maintain a democratic society,” Reglidis Rauca added.

Photographs from the meeting Reglindis Rauca posted on her Lithuanian blog: