A commission for assessing cultural heritage real estate from the Cultural Heritage Department has provided legal protection to the remains of the Great Synagogue in Vilnius. The Great Synagogue of Vilnius was one of the largest religious institutions in Eastern Europe. It was renowned as an important Jewish spiritual and educational center and put Vilnius on the map as a center of Jewish scholarship. The Cultural Treasures Registry lists the construction (fragments of brick wall dating from the 18th century and entrance to the synagogue, southwest wall fragment with niche for the aron kodesh and eastern wall fragment), architectural features, remains of the former building complex including mikvehs dating from the late 19th century, a utility trench on Žydų street and cultural strata as valuable and protected features of the synagogue complex.

Originally the site hosted a wooden synagogue, believed to have been built around 1573. It burned down and was replaced at least once. In 1630 and 1633 royal grant was issued to allow a brick and mortar synagogue to be built there.

At the southeast corner of the building just across the small street stood the Vilna Gaon Kloyz, allegedly on the site of the Vilna Gaon’s former home. Next to the Gaon Kloyz there was the burial society’s synagogue. On the southwest corner was the Old Kloyz, which some believe was built in 1440. The complex of synagogues was enclosed forming a new interior courtyard for a total of two connected interior courtyards in the central area. The newly formed courtyard included a school, kloyzes for artisans and craftsmen and other buildings. The middle of the courtyard featured a public well for water piped in from the springs at a nearby Catholic church. The two courtyards included about 14 separate synagogues and kloyzn.

The Great Synagogue was remolded into the classicism style sometime after the Polish-Lithuanian uprising of 1794, during which the synagogue sustained minor damage to its roof. Later a posthumous bequest of a large private library led to the appearance of the Strashun library adjacent to the Great Synagogue.

The Great Synagogue and much of the surrounding complex of buildings or shulhoyf were greatly damaged during World War II. City planning documents in 1953 and 1954 led to the bulldozing of the ruins of the Great Synagogue from 1955 to 1957 and asphalting of the site. In 1964 a kindergarten building was built at the site. The Vytė Nemunėlis primary school was eventually housed in the kindergarten building, which still stands on top of the ruins of the Great Synagogue. The primary school is scheduled to close this year.

Plan of the Great Synagogue and the Shulhoyf Buildings 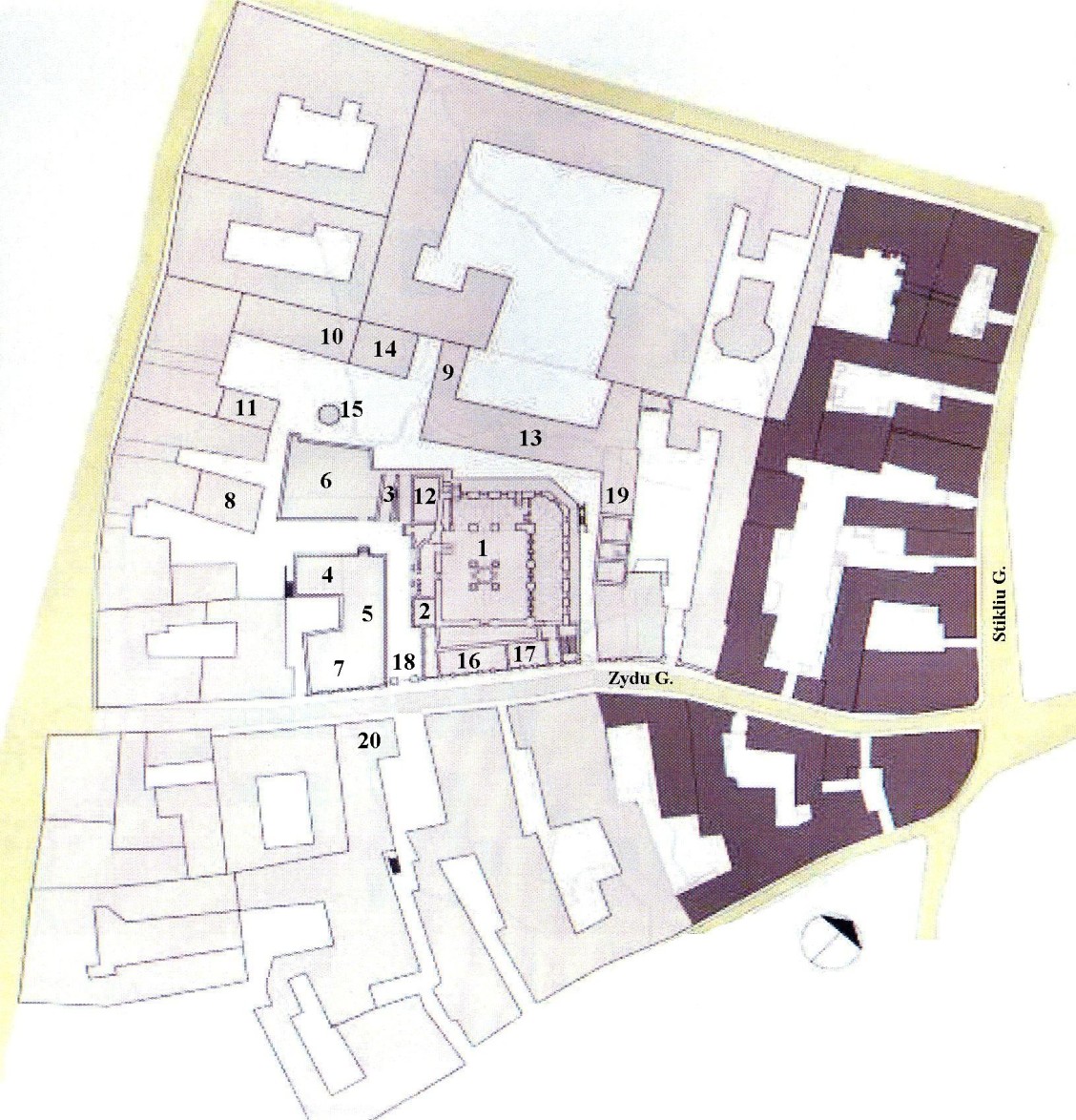