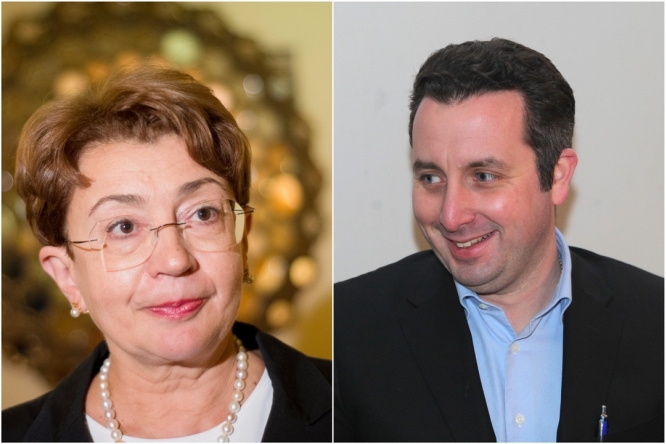 Simonas Gurevičius and his group of proponents accuse Faina Kukliansky and her circle of authoritarianism and the desire to remain in power, and allege they sought to protect themselves from the effect of elections in the largest and most influential Vilnius Jewish Community. Photo: J. Stacevičias and V. Balkūnas

Which ethnic minority communities receive the greatest attention in Lithuanian public life, the upper echelons of power and in the corridors of the special services? The Poles and Russians of course, since they are thought capable of become or of already having become the tools of the Kremlin’s “information war” or “hybrid aggression” against Lithuania.

But our heads of state should look to themselves first, because there is no evidence of greater efforts to make integrate more fully these ethnic minorities into Lithuania society, nor of a more sincere dialogue with them.

Even more rarely does a no less and perhaps more important ethnic minority in terms of Lithuania’s international positions end up as the center of attention: Jews. How is Lithuania attempting to heal the wounds of the Holocaust, how is it coming to terms with this unprecedented crime, carried out by Lithuanian hands as well? What relations will there be with the remains of that once prolific community still alive and living in Lithuania today, and how do the Jews themselves feel here?

These are just few questions, not just about morality and social health, but also touching on geopolitics. These questions became quite topical recently, as the Lithuanian Jewish Community has come to perhaps its greatest crossroads, unseen since the time of Lithuanian independence.

The term of office of the serving chairwoman of the Lithuanian Jewish Community and of its largest member the Vilnius Jewish Community, Faina Kukliansky, ended several months ago. It was clear even earlier the struggle for these posts would include the smell of gunpowder. Gurevičius, a former executive at the Jewish Community who served on Kukliansky’s team, left his post following internal disagreements and began looking for revenge and to hold the two top posts. One of the major issues fueling the conflict was the LJC leadership’s decision to annul the earlier principle in force under which each local community exercises a vote in LJC chairman elections proportionate to that community’s population. Instead, it was decided each community would have one vote.

Gurevičius and his side accused Kukliansky and her side of authoritarianism and the desire to hold on to power, and alleged they had attempted to protect themselves from the effect of VJC elections in this manner. And soon a majority began to quickly form in the VJC in favor of Gurevičius [sic], which Kukliansky’s supporters said was the result of Gurevičius and his unknown and shadowy backers sending a flood of new members into the VJC. Suspicions were also sown that Gurevičius’s reason for seeking power in the Community was his desire to take control of state monies allocated as compensation for Jewish property to be used for heritage restoration. Although the LJC declared the elections organized by Gurevičius for the VJC were illegitimate, they nonetheless went forward. But the winner of those elections and his proponents weren’t even allowed in to the LJC elections held later [sic] where Kukliansky won under the new order of things.

The conflict ended up in the courts, and as they made their arguments about who was right, a cloud of unknowing hung over the Jewish Community. The legal battles could continue for a long time, so both sides claiming only they alone are correct are preparing for new meetings and battles. Both sides’ accusations against the other–of betraying Jewish interests, attempting to seize power and of spending money in dirty ways–have now surfaced very publicly. This situation in the LJC, with only a few thousand members, is real gift to anti-Semites. It’s no surprise that Russia’s propaganda media, never ones to turn away from a fight which can be exploited, have already focused on this conflict. Different echoes of the conflict have also appeared in the West now as well.

It seems Kukliansky and some of her supporters have now begun accusing their opponents of supporting exclusively that element with the Jewish community who have been opposed in principle to Lithuanians and the idea of an independent state since Soviet times, who are pro-Russian, support the Kremlin’s policies and criticize the geopolitical priorities of our country [sic].

According to the current LJC leadership defending themselves, these sorts of Jews form a natural union with Jewish radicals who consider the Lithuanian state and public stalwart anti-Semites guilty till the end of the world of the Holocaust in this country [sic]. Thus, they claim [sic, they don’t], productive dialogue with the Lithuanian government is practically impossible for this faction of Jews who are supported by compatriots of similar persuasion in the West and Israel.

Pointing at figures around Gurevičius who can truly be categorized as belong to these camps, the current LJC leadership explains the former cannot accept the recent warming in Jewish-Lithuanian relations, nor the positive view by the Lithuanian government towards this small but important ethnic minority, nor improving relations between Lithuania and Israel. All of this leads to a question. If the aforementioned powers really did take control of our Jewish community, powers who seek to escalate tensions with Lithuania and Lithuanians, it can’t be rejected out of hand that this could have repercussions for the state’s geopolitical positions as well.

Note: The above opinion piece was published, without any authorship indicated, by Lithuania’s largest daily newspaper, Lietuvos rytas. The statements in this piece do not reflect the true position of the Lithuanian Jewish Community, its leadership or its various members. In many cases the opinion piece gets the facts completely wrong, for example, the claim Simonas Gurevičius was not allowed to attend the meeting to elect the chairman or woman of the LJC. He was allowed to attend, contest the seat and to vote. He received no votes. This opinion piece is presented in English merely for our readers to acquaint themselves with matters of currency in the Lithuanian media.