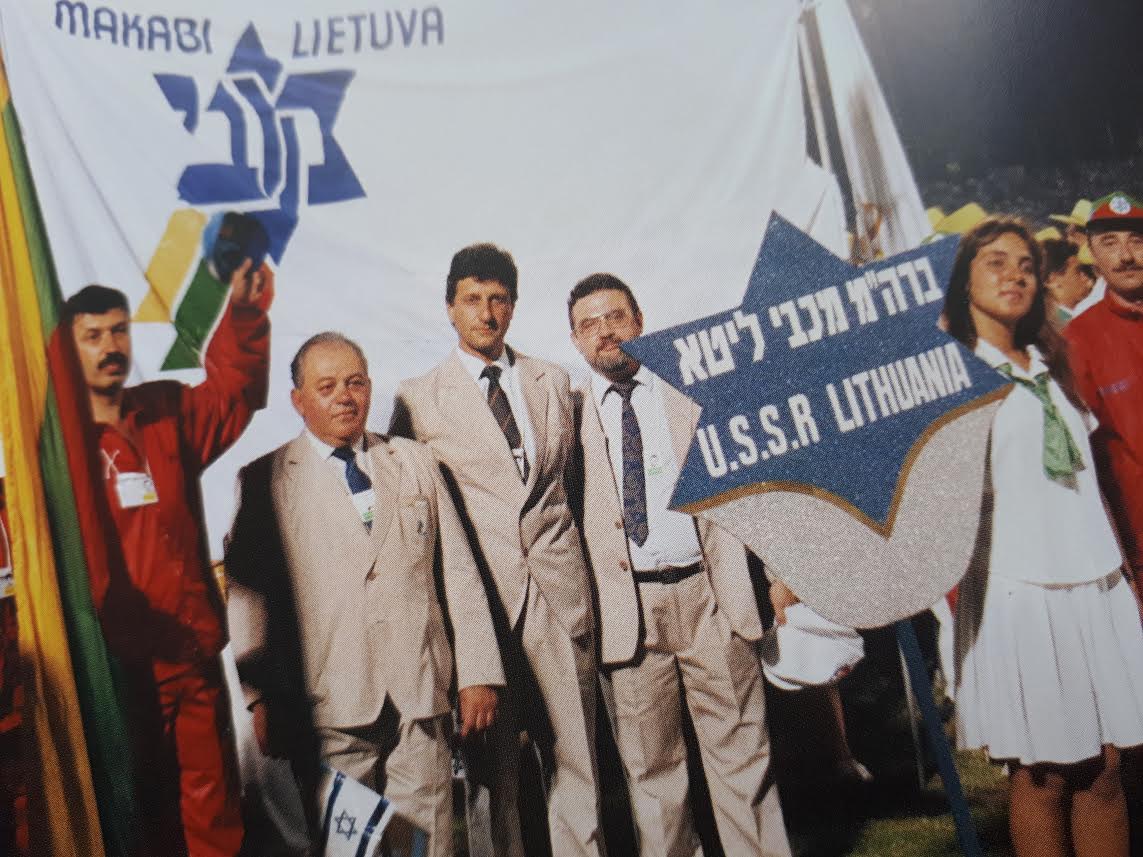 The Lithuanian Makabi Athletics Club delegation is leaving for the 20th Maccabiah Games, held once every four years, in Israel, where more than 10,000 athletes from 80 countries will compete.

This will be the 8th Maccabiah Games attended by the Lithuanian team. In 1989 the team was the first to carry the Lithuanian national flag at the opening ceremonies as the country sought independence from the Soviet Union. Club president Semionas Finkelšteinas and club athletes remember well the event.

“The Lithuanian Makabi delegation will have 28 athletes in 8 sports: badminton, swimming, mini-soccer, judo, table tennis, tennis, chess and riding. A Canadian rider who has Litvak roots was accepted on the Lithuanian team since Canada didn’t send a team of riders this year. The Lithuanian team includes three former Maccabiah medal-winners: chess player Eduardas Rozentalis who took bronze in 1989, badminton player Alanas Plavinas who won silver in 2013 and Aleksas Molodeckis who took bronze in judo in 2013.

“It’s important to us to participate in the Maccabiah and we never miss a single Jewish Olympics. Whether our team is stronger or weaker, we have always participated and won medals. This time we have five young people, three of whom expect to win medals. We have three badminton players, and the swimmer and strong table tennis player Neta Alon who could be a medal winner. Markas Šamesas and Vitalija Movšovič are our badminton players who could come home with medals. Among the adult athletes the chess player E. Rozentalis, badminton player A. Plavinas, and judo martial artist A. Molodeckij have a good chance of winning medals. Salomėja Zaksaitė, an accomplished chess player, will be competing at the Maccabiah for the first time. Our soccer team is traveling there with their new trainer Arūnas Šteinas. Three of our strong soccer players are unable to attend for various reasons. Artūras Sobolis couldn’t take time off work, Danielius Gunevičius’s trainer won’t allow him to go and Romanas Buršteinas has to attend to family matters.

“All the young people will stay at the best hotel in Haifa. They will compete in the games after which they have a separate program of activities. The swimmers will compete at the Wingate sports complex. Athletes from 80 countries will attend Maccabiah opening ceremonies July 6 and global media always give large coverage to the event, the opening ceremony is covered outside Israel by CNN, BBC and other global televisions channels. The Jewish Olympics takes place once every four years and there is a broad cultural program arranged for all participants. This event is about more than just about sports.

“We will be sent off by Israeli ambassador to Lithuania Amir Maimon, who also plays with use at Lithuanian Makabi competitions, and he is planning a ceremony to see us off at his residence. The Lithuanian Jewish Community supports us. The Maccabi World Union invited LJC chairwoman Faina Kukliansky to attend the opening ceremonies and march with the team. She received the as a Lithuanian Makabi supporter, demonstrating support for the LJC.”

“Athletics has always been an essential part of Jewish life. Makabi is a welcome expression of sport. It is a very good thing we have this club with its president Semionas Finkelšteinas, with Daumantas Todesas, Matviejum Frišman, Gercas Žakas, Michailas Duškesas–all the Makabi enthusiasts. We have something to be proud of. I was very pleased to receive an invitation to participate as the chairwoman of the LJC, it is a great honor to walk together with the athletes. We will carry the Lithuanian and LJC flag with the Makabi logo. For non-professionals to achieve great things, they need to work in agreement with all interested parties. Sports is often maintained by its enthusiasts and fans, after all. Participation in the Makabi athletics club could become much greater at the Jewish school as well, there are all the necessary conditions for this and the school principal himself, Miša Jakobas, supports the idea.”

The Lithuanian Makabi club hopes soccer practice will be held again on the school’s athletics field, adding potential players to the team.

Makabi vice president Daumantas Todesas said representatives of all age groups attend the Maccabiah games, from 10-year-olds to 70-year-olds. Often it’s a family affair, with multiple generations supporting sporting traditions. Now there is special attention to fostering youth, he said. Such active “marriage agencies” which operate at the Maccabiah games are not to be seen anywhere else, he joked. Jews of all nations meet and many of them start families. There is no such program for older athletes, he said.

Lithuanian Makabi has deep roots. It was established in Vilnius in 1916 and operated in independent Lithuania from 1920 to 1940. Headquarters was in Kaunas. In 1926 there were 83 Makabi sections with 4,000 members throughout Lithuania. In 1932 and 1935 Lithuanian Makabi delegations participated at the first and second Maccabiah Games in Tel Aviv.

The Holocaust wiped Lithuanian Makabi off the map of Lithuanian life for several decades. The reconstituted club is, of course, not the equivalent of the pre-war club, neither in terms of ability or membership. Ninety-two percent of Jews were murdered at the Ninth Fort in Kaunas, at Ponar and murdered near their towns and villages in quarries and forests.

The organizing committee formed a delegation in 1989 to attend the 13th Maccabiah Games comprised of officials, 25 athletes and 25 members of the Fayerlakh Jewish folk ensemble. President Finkelšteinas headed the delegation and Todesas exerted great efforts to insure the team had its own uniforms. All of the club’s graphics, logos and art are the work of Makabi soccer player and artist Ilja Bereznickis. In 1989 one of the hardest matters was to get the delegation out of the country, since Lithuania was still not independent, and much diplomacy and knowledge was required to achieve just that.

“I remember even now all the good will which came to our aid to overcome the malicious blockade by Moscow, even the cancelation of tickets to fly the delegates through Moscow to Israel; we very quickly received tickets to Israel via Warsaw. The Maccabi World Union helped us get them and arranged a flight on El Al airlines. Everyone in Lithuania took a positive view of us and saw us as a long-standing, famous Jewish ethnic sporting organization, as part of the movement to resist the Soviet Union, and helped us make everything we needed so much back then. Our first appearance at the games was marked by significant achievements.”

The Lithuanian Makabi Athletics Club thanks its supporters:

Ginestra, Init, GLAS, Tinklelis, the Sportas Visiems [Sports for Everyone] Assocation and the club’s many friends who have contributed to sending the Makabi delegation to the 20th Maccabiah Games.