Re-Opening of White Synagogue in Joniškis

During celebrations of Joniškis’s own city day next week the restored White Synagogue there is to host a re-opening ceremony. The synagogue was built in 1823 and its external face combines features of the late classicism and romantic styles.

Restoration of the synagogue was financed by European Economic Area grants allocated by the Republic of Lithuania, the state budget and the Joniškis regional administration for a total of 389,358.35 euros.

The Joniškis synagogue complex is located on the eastern side of the town square. Two adjacent brick buildings, the White and the Red Synagogues, form the complex. They were built at different periods and have different architecture and interiors. Their location by the central town square but set back among other buildings is fairly typical. They are very visible from side streets but looking from the main street they are blocked by other buildings. Both synagogues have smaller one-storey and two-storey buildings surrounding them.

Jews settled in Joniškis around the middle of the 18th century when charter rights were granted the cities of Joniškis and Šiauliai. Jewish communal life was intimately connected with religion and the synagogues. In 1797 the Jews of Joniškis received permission to build a synagogue and acquire a piece of land for a Jewish cemetery. A synagogue is first mentioned in 1823. According to the inventory of the Šiauliai economy conducted in 1825 and 1826, there were 49 Jewish families in Joniškis. In the mid-1800s there were 1,042 Jews living there. A second synagogue is first mentioned in 1865, and in 1866 there are records of a third synagogue and a Jewish inn. By 1897 the Jewish population had grown to 2,277. The third synagogue located at Vilniaus street no. 8 was turned into a store and residential building in 1965 and 1966. 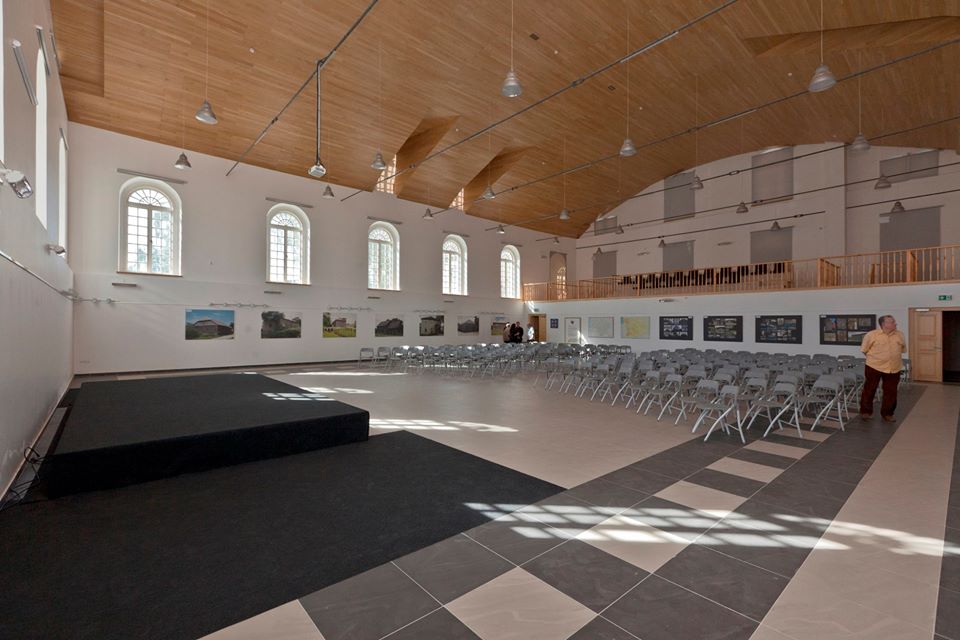 Preparatory interior construction work was completed in 2016 and included setting up auxiliary spaces, repairing the flooring and ceiling, fixing and installing utility pipes and electricity, repairs to the wall, interior decoration, acquisition of furniture and setting up a lighting system. Repair and restoration of the façade, floor, foundation, mortar protection measures, plaster repair, painting the exterior and restoration of brick mortar were also carried out. The Pakruojo arka company did this work. In early 2017 an interactive exhibition was set up at the White Synagogue by the Ekspomūza SneakyBox enterprises.

Designs have been made for exhibition furniture copying that of period buildings in Joniškis. The interior space will feature different exhibits and items with a general museum infrastructure remaining a semi-permanent part of the museum space. The museum will be hands-on and interactive for children and adults.

Upon completion of the project, the White Synagogue has become an important regional cultural and public center and a venue for community and international events. The interior space is equipped with everything needed to hold concerts, plays, conferences, seminars, art shows, solemn historical anniversary celebrations, holiday celebrations and festivals.

At the ceremony to be held in the synagogue during Joniškis Day next week, an exhibition on the historical development of the town will be unveiled. Please come and enjoy this fine exhibit and the re-opening ceremony.

Information provided by the Education, Culture and Sports Department of Joniškis.