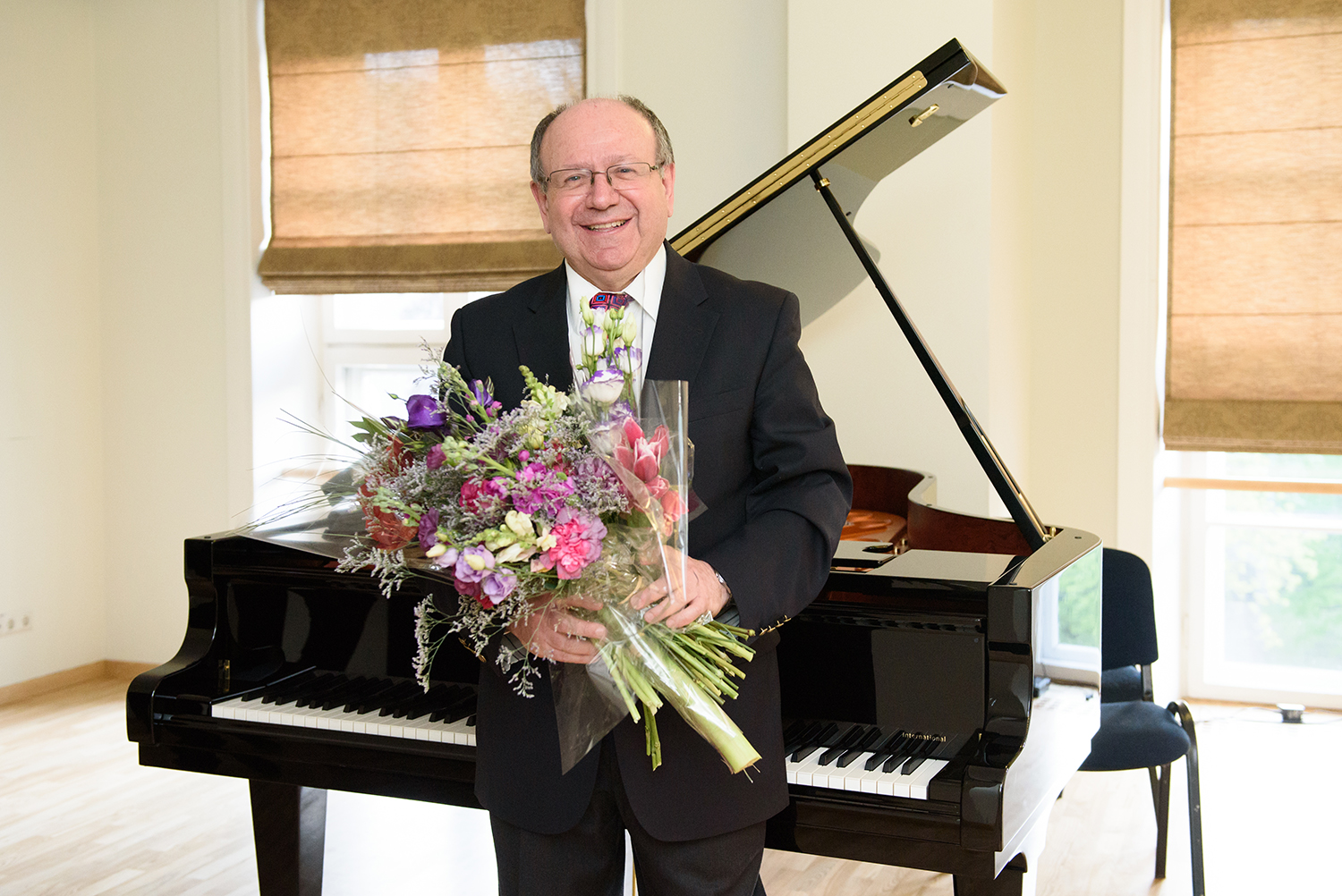 The evening began at the Jascha Heifetz hall at LJC headquarters in Vilnius with the airs of a tango, an overflow crowd and the birthday boy smiling on stage. Leonidas Melnikas is a piano player, organ player, musicologist, a tenured doctor, the head of his cathedral at the Lithuanian Academy of Music and Theater, chairman of the academy’s senate and professor. He’s also a member of the board of directors of the Lithuanian Jewish Community. He turned 60 Thursday.

The birthday celebration was part of the Destinies program of evening cultural events initiated and organized by LJC deputy chairwoman Maša Grodnikienė, who used the occasion to honor the memory of Melnikas’s father Isaiah Melnik, who would have turned 110 that same day. He was a well-known pharmacist at the Vilnius Central Pharmacy (on what is now Gedimino prospect) and at the Žvėrynas Pharmacy in Vilnius, where he made his own preparations in his time. He survived both Stutthof and Dachau. He was beloved by all and was a calm and warm person who enjoyed attending all sorts of concerts. His son Leonidas’s musical career began when his mother took him to the Ąžuoliukas school. His first teacher was the famous pianist Nadežda Duksdulskaitė. “My entire childhood was illuminated by my parents, the very best, the very wisest people, and family remains extremely important to me,” Melnikas said of himself before embarking on a performance of tango melodies with violinist Boris Traub, cellist Valentinas Kaplūnas and accordion player Gennady Savkov.

Professor Silvija Sondeckienė was part of the birthday party. She’s a famous cellist and music teacher and the wife of one of the country’s most renowned conductors, professor Saulius Sondeckis. Sondeckienė said Melnikas had sacrificed part of his life to the students and teachers at the Lithuanian Academy of Music and Theater as a teacher there and in writing about other important books. Over many years he wrote about celebrated maestro Saulius Sondeckis, conducting long interviews sitting together with him in the evening. Writing the book took several years because new facts had to be added continually after every interview, with each new fact opening up onto a wider horizon. New facts are challenging to an author, but Melnikas shared his hope with the audience at the birthday celebration, saying he intended to finish the long-awaited book within a year.

“Communication is not a gift to others, it’s a gift to oneself: when you talk with noble people you absorb much yourself,” Dr. Melnikas said remembering time spent with Sondeckis. “I write in simple, clear language, I’m not trying to write long books, so that people will read them,” he said, adding his wife reminds him books are written for people to read them.

And his books are very readable, for example, “Muzikos paveldas: epochų ir kultūrų sankirta” [Heritage of Music: The Intersection of Eras and Cultures], which says we must accept the heritage we have as it is. We shouldn’t distance ourselves from it, nor should be praise certain portions of the culture of the past while ignoring other parts of it. In the Note of the book “Lietuvos žydų muzikinio paveldo pėdsakais” [In the Footsteps of the Litvak Musical Legacy] professor Melnikas writes Lithuania is the place where great, world-famous artists were born and their work is a priceless part of the cultural legacy we all share. The work of a great artist belongs to everyone, to the whole world. He says we cannot comprehend life without the classics of music. They are our daily companions, intimate and dear, no matter how distant we are in time and space from them. But even while the genius and power of their work has overcome all geographical and national borders and allowed us to free ourselves from the grip of time, each of them had a beginning in time, and came from a specific location.

Union of Lithuanian Musicians and composer Audronė Nekrošienė-Žigaitytė, Leonidas’s childhood friend and now his colleague, continued the conversation at the birthday celebration and kept asking Melnikas about his family, work and plans.

“I have been lucky in life because I play and write,” he answered one of her questions cheerfully and sincerely. After the conversations he sat down at the LJC’s new piano and played from the heart captivating and moving tunes with violinist Boris Traub, cellist Valentinas Kaplūnas and accordion player Gennady Savkov accompanying.

Towards the end of the birthday party Lithuanian Jewish Community chairwoman Faina Kukliansky sang lyrics in Yiddish to a tango melody and said Leonidas Melnikas is “an absolutely unique Jew whom all organizations invite to work with them and who gets along with everybody.”