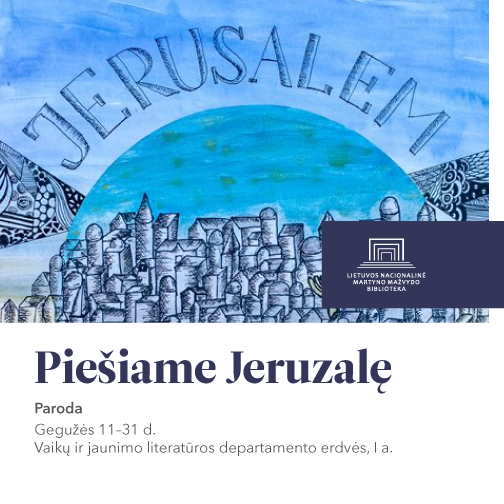 Let’s Draw Jerusalem, an exhibit running from May 11 to May 31 in the children’s and young adult literature section of the the Lithuanian National Martynas Mažvydas Library.

From May 11 to 31 the Lithuanian National Martynas Mažvydas Library’s children’s and young adult literature department space will host a national exhibition of drawings by Lithuanian students called “Let’s Draw Jerusalem,” marking the 25th anniversary of the opening of diplomatic relations between the State of Israel and the Republic of Lithuania.

Over 80 drawings in the exhibit come from nine municipalities around the country, including Elektrėnai, Rokiškis, Birštonas, Jurbarkas, Kretinga, Kėdainiai, Molėtai, Utena and Alytus, the result of contests sponsored by the Israeli embassy in 2016 and 2017 also called “Let’s Draw Jerusalem.” In one location the contest was changed to “The Bridge of Friendship between Israel and Lithuania,” since that contest began just as the two countries were celebrating the 25th anniversary of the opening of diplomatic relations this year. Winning drawings in the 6 to 10, 11 to 14 and 15 to 18 age groups have been put on public display at the national library, portraying how the children and young people creatively visualize Jerusalem and friendship between the two states. More than 800 students from 59 schools took part under the direction of over 90 teachers, with help from teachers in other disciplines including history, ethics and geography.