Vilnius, April 26, BNS–Participants at the March of the Living to commemorate Holocaust victims in Vilnius say both the crimes of the murderers and the deeds of the rescuers need to be judged in commemorating the mass murders.

For the tenth time in as many years marchers walked from the Ponar railroad station along the same path the victims were marched during the Nazi occupation to what is now the Ponar Memorial Complex.

“Today we both recognize and thank the individuals who, despite the risk not only to their own lives, but to the lives of their entire families, saved Jewish lives. We thank them and we bow our head,” Israeli ambassador to Lithuania Amir Maimon said at the ceremony.

He noted the inscription on one memorial speaks of 70,000 Jews murdered, but noted there are more than 200 mass Jewish graves where the same thing happened in Lithuania. He stressed the importance of remembering the Jewish community wasn’t a group of “temporary residents,” and contributed significantly to the creation of the state of Lithuania in the areas of economics, science, technology and art.

Ambassador Maimon said there were the names of people, families and communities behind the statistics who, as the prime minister of Lithuania noted, lived together for many years. He said it was our moral imperative to insure the names appear at these sites, not just the numbers.

Director of international Jewish affairs at the American Jewish Committee Rabbi Andrew Baker said guilt for the crimes of the Holocaust were shared by the Nazis and their collaborators, and also pointed to Soviet guilt in not perpetuating memory of the victims. Rabbi Baker noted throughout the former Soviet Union inscriptions on monuments at Jewish mass murder sites only state “Soviet citizens, murdered by the German fascists” are buried there. There is no mention they were Jews murdered in the Holocaust.

He said it was now possible to “assess the past critically” following the fall of Communism, to consider both the victims of the Holocaust and the victims of Communism and to judge the role played “both by local collaborators, neighbors… and rescuers.” Lithuanian prime minister Saulius Skvernelis marched and also said it was important to remember both those who murdered the Jews, those who were apathetic to the Holocaust and those who rescued Jews. He said we see today crimes committed against humanity, and it’s important that those who want to help be the majority to insure this kind of “mass tragedy” never again occurs. 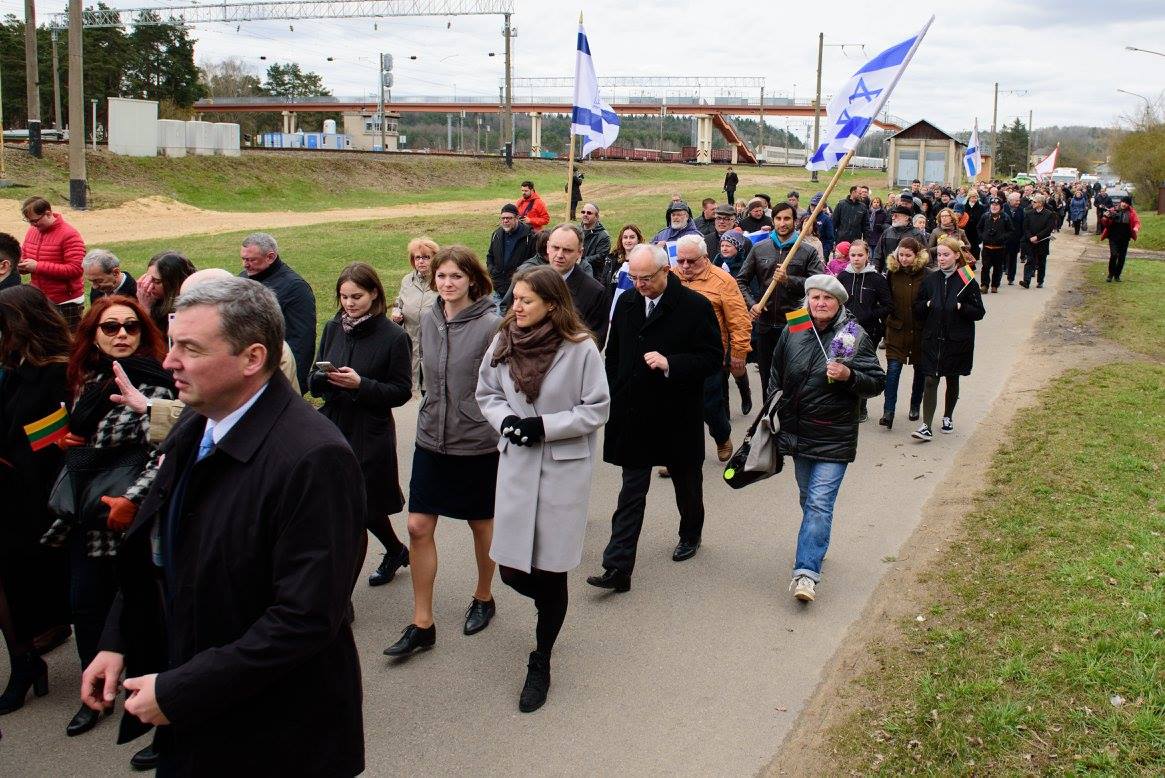 Holocaust survivor and Vilnius ghetto prisoner Fania Brancovskaja said there are many sites in Europe where Jews blood was spilled. “As one of those people who survived the Vilnius ghetto, I call upon you not to forget them. As long as we’re here, we must pass this on to the coming generation, so that our children, grandchildren and great-grandchildren never forget, so that the honor of the murdered never fade,” she said.

The Lithuanian Jewish Community issued a press release in which they said the March of Living signifies for them “that we, Jews, are alive, that we, the children of the victims, do not succumb to hate, violence or brutality, that the Nazis and their lackeys did not succeed in exterminating all Jews.”

Before World War II approximately 220,000 Jews lived in Lithuania. Over 90 percent were murdered during the Nazi occupation.