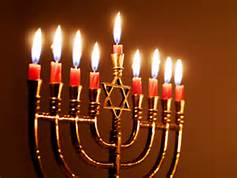 “…While the Chabad Hassidim cannot be excluded from the ranks of Lithuanian Jews (their communities in Vilnius go back to the time of the Russian Empire), they do not represent all Lithuanian Jews, and especially not those who consider themselves misnagdim, largely known simply as Litvaks. Perhaps the Vilnius municipality this year could seek for some sort of Solomonic solution which wouldn’t step on the toes of the Litvak community and would take their traditions into account. Or simply point out that the erection of a giant menorah is not tacitly understood as a universal Jewish tradition…”

The holiday of Hanukkah, celebrated for 8 days beginning on Kislev 25, is one of those holidays which the Torah does not demand be celebrated. That’s understandable, since the holiday comes from a time after the Torah was given. The name of the holiday is explained by examining the root, which indicates inauguration, celebration, dedication, establishment, and these actions are connected with the reconsecration of the Temple in Jerusalem. The holiday is begun by lighting a candle or an oil lamp, over the eight days lighting one more flame each day. The Talmud (Shabbat 21b-22a) relates that one school of thought in the first century, Beit Shammai, was of the opinion all eight flames should be lit initially and successively extinguished one by one daily, while Beit Hillel followers believed one flame should be lit the first day, two the second day until all eight were lit, which is the belief which took hold and is followed till today. As Rabba bar bar Hana explains, relying upon what Rabba Johanan said on the issue: “The thinking of Beit Hillel is that we should grow in the light, not shrink” (Shabbat 22a). Light should increase daily. It is the opinion of many authors that something which burns up by itself in a limited time should be burned, and that there be just enough “fuel reserves” that it extinguish itself within 30 minutes after “the onset of night.” Therefore electric light bulbs are inappropriate. Although some allow their use, if there is nothing else available, no special blessing is said upon their lighting.

Electric lights are most often used in Hassidic Chabad Hanukkah displays in city centers or other prominent locations. Chabad itself says this tradition began with the seventh Chabad rebbe Menachem Mendel Shneyerson who issued a directive to set up Hanukkah menorahs in public spaces in 1974. The first such was erected in Philadelphia, after which Chabad Hassidim undertook such campaigns around the world. These campaigns aren’t always met universally with support. Besides all the anti-Semitic attacks, there have been and continue to be discussions, at least in the USA and other countries which adhere to principle of the separation of church and state, about the appropriateness of public displays of religious symbols. This is sometimes applied to Christian symbols as well. Different municipalities come up with their own solutions, for example, claiming that neither Christmas trees nor giant menorahs set up in public spaces are actually religious symbols. One could easily agree, knowing these giant public menorah displays are not traditional. All the more so since they use electric light bulbs rather than wax candles or oil. Moreover, politicians of various stripes who take part in these lighting ceremonies most likely see themselves as participating in a cultural rather than religious ceremony, wanting to demonstrate their tolerance towards minorities resident in the country.

For a number of years now a Great Menorah has been set up in Vilnius at the initiative of Chabad and politicians and diplomats like to take part in the lighting ceremonies, thus supposedly finding an opportunity to express their solidarity with the Jews of Lithuania, while ancient traditional Hanukkah lamp lighting ceremonies in private spaces or at the entrance to private spaces remain almost unseen. These ceremonies are the ones which perform the most important role in the religious sense, that of testimony: the lights are to be lit at the entrance to the home or set upon the window sill, so they would be seen from outside, standing witness, as directed by the Talmudic sages.

While the Chabad Hassidim cannot be excluded from the ranks of Lithuanian Jews (their communities in Vilnius go back to the time of the Russian Empire), they do not represent all Lithuanian Jews, and especially not those who consider themselves misnagdim, largely known simply as Litvaks. Perhaps the Vilnius municipality this year could seek for some sort of Solomonic solution which wouldn’t step on the toes of the Litvak community and would take their traditions into account. Or simply to point out that the erection of a giant menorah is not automatically seen as a universal Jewish tradition.

Of course the large and highly decorated Vilnius Christmas tree on Cathedral Square, which reminds Christians of Christmas, for whom it is non-commercial but fancy symbol recalling the event of Christmas, is not a religious but rather a cultural symbol, also lacking deeper tradition, appearing in Protestant countries. In a strange way both Christian Christmas and Hanukkah always come up against a difficult dilemma, namely, the marginalization of the primary religious content, replacing it with universal meanings, which from the religious perspective seem empty: the victory of light over darkness, good over evil, or simply as a festival of gifts and fun, or doughnut-eating “championships,” Israel taking pride in holiday doughnuts consumed in the tons. On the other hand as purely religious holidays they cannot appear in public spaces, at least not in countries which adhere to the separation of church and state. It’s difficult to understand this dilemma as we try to discern the difference between the secular and religious understanding and celebration of these holidays, even if the origin of the holidays is religious. Rabbinical commentaries allow us to unearth the holiday’s content, usually not of very great significance to Jews or to non-religious people, which is presented as The Content: the collision not between light and darkness, but the light which emanates from the Torah, and the light which shines naturally, which is “the light of the world,” beauty and goodness. Hellenic culture wasn’t simply dark and bad, on the contrary, it was proud of its special cultural achievements which laid the foundation for Western civilization. With that in mind, how is this collision understood?

The dedication and re-consecration of the Temple and the miracle of the unending oil are the endless power of the Torah to shed light, despite, or perhaps exactly because of, the darkness. But this requires the efforts of the individual person as well: the oil lasts until the new oil is made, eight days, where the number 8 first of all symbolizes circumcision, expressing the sign of the Covenant. It is often explained that it exceeds the limits of that which is naturally given or created. One aggadah tells of a Rabbi Akiva who was asked by a Roman emperor which was grander, the Creation of God or Man. Rabbi Akiva answered Man. The emperor was surprised by his answer, so Rabbi Akiva asked him a question: did he more like to eat raw grain, or cake made of them? Everyone will answer cake, of course. But this is the miracle wrought by the hand of Man. That which a person makes is made of that which is created. That a man can himself create, that he can change himself, perfect himself, overcoming that which is given and his own habits which encourage a man to just enjoy, or live simply satisfying his various appetites. The purpose of the Torah is that he who studies it and begins to follow its rules empowers the ability within him to cultivate himself, to chance himself, to transform. But this usually takes place almost imperceptibly, viewing the process from the outside, with holiness growing daily within, according to the Beit Hillel teaching about Hanukkah. This is the Mussar way, i.e., the path of morally repairing one’s soul, the path which Rabbi Israel Salanter, the founder of the Mussar movement in Lithuania, tried to blaze.

The miracle, or nes, is emphasized in the holiday, reminding celebrants of the essential difference between the “Greek” and Torah perspective: not everything which exists is seen by the eye or susceptible to reason, i.e., that which exists as a material and tangible given, and beauty cannot save the world unless it is suffused with the light of the Torah. This is the explanation of the line in Genesis about the biblical forefather of “the Greeks” (and their cultural heir Europe), Noah’s son Japhet: “God shall enlarge Japheth, and he shall dwell in the tents of Shem; and Canaan shall be his servant.” (Genesis 9:27). As Rashi explains: “Let His holy Shekhinah dwell in Israel. According to the scholars’ explanation in the midrash (Yoma 10) this means: although God enlarged Japheth so much that Cyrus, who has Japheth’s offspring, built the Second Temple, the Shekhinah was not in it. Where was she? In the First Temple which Solomon, the descendant of Shem, built.” Both Persians and Greeks are often considered the offspring of Japheth, and according to a folk etymology the name Japheth is connected with the Hebrew word yafe, “beautiful.” Therefore it is said that beauty must flow from the tent of holiness, not from beauty. Today when the meaning of this holiday is explained it is often stressed that Hellenism is alive and thriving in the contemporary world which glorifies a beautiful lifestyle, technology and consumption which without the light of the Torah appear totally meaningless. The paradox is that from the religious perspective in celebrating Hanukkah simply and nicely, enjoying the lights and the doughnuts, its content turns into its polar opposite: the deification of beauty rather than the beauty of holiness. At least this idea is often stressed in the different religious commentaries on and explanations of this holy day.