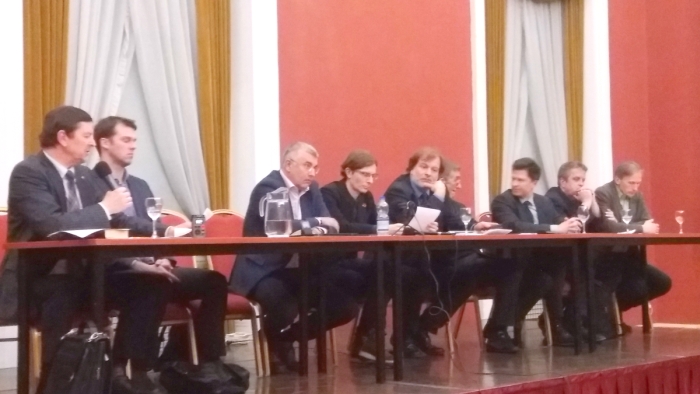 The “discussion” organized by the Vilnius city council on November 29 on whether to change an earlier decision to name a street after a Lithuanian Nazi leader in the center of Vilnius was an unmitigated disaster.

In fact, there was no evidence the Vilnius municipality organized anything at all. The main force and the only real announcer of the event was Vilnius City Council member Mark Adam Harold, aka Mark Splinter, a British expatriate who has been trying to get the street renamed to no effect for some time. Harold himself denied he was the organizer, but he was the main speaker and spoke bravely and forthrightly in favor of changing the street name.

The whole point seemed to me to be to shame Vilnius mayor Remigijus Šimašius with media attention into relinquishing his blocking the proposed change. Unfortunately only scant and local media attention was shed, the event having been all but suppressed until one day before it happened, leaving interested parties believing they had been excluded from the supposedly public forum.

Readers will recall mayor Remigijus Šimašius promised in writing to specify a location in Vilnius by October 20, 2016, for erecting a monument to Holocaust rescuers. No such site has been named to date. Instead the Vilnius municipal body claims work is going forward behind the scenes on creating the actual monument. One assumes they will place it in a dark forest far from public sight, as things stand now, sometime in the summer of 2047.

The “discussion” was framed with the title “Does the name of Kazio Škirpos alley need to be changed?” Kazys Škirpa Alley is the name of a small street which runs from the Neris River along the Vilnelė Creek along the western side of the Museum of Applied Art [Taikomosios dailės muziejus] and the hill featuring Lithuania’s most recognized symbol, the Tower of Gediminas, into Vilnius’s central park located just off Cathedral Square. In other words, it’s at the very heart of the heart of the Lithuanian capital. It is not a historic name for the street. It was adopted in the last few decades by those in the enthrall of misguided worship of Holocaust criminals as Lithuanian freedom fighters. It is not an alley either, in either sense of the term. It is lined by a line of trees spaced a little bit too far apart to be called even half of an alley only on one side, by the creek.

Kazys Škirpa was the pro-Nazi founder and leader of the Lithuanian Activist Front, and of the LAF’s political body, which called itself the Provisional Government of Lithuania. This was not an elected body by the wildest stretch of the imagination. Kazys Škirpa selected those he wanted to join, and the umbrella organization, the LAF, claimed to include all Lithuanian parties except the Communists. In fact, Škirpa acted on behalf of the German Nazis in Berlin, where he lived, and his body’s representatives were all resident in Berlin.

The Abwehr, German military intelligence, funded the establishment and maintenance of the LAF and Škirpa personally. The LAF set to work creating “cells” in Lithuania of anti-Soviet resistance. From Holocaust memoirs we know these “cells” were told early on when the decisive moment came they would be called upon to kill their Jewish neighbors. The decisive moment was the German invasion of the USSR. When that moment came, the LAF called upon its underground cells to kill their Jewish neighbors. They did. The myth of a June Uprising is cherished in Lithuania as the moment when Lithuanians rose up and showed the world they were still there, after a year of Soviet occupation. In fact, they showed the world they were Nazi allies, and Roosevelt immediately considered Lithuania an enemy belligerent within the Axis sphere. And he was correct.

The June Uprising was a German military intelligence operation to ease the arrival of Wehrmacht troops on the first leg of their march on Moscow. It worked. When it was accomplished, the “Provisional Government” in Kaunas was ordered by its masters to disband. They did. But not before sending a telegram to their beloved leader of the New Europe, Adolf Hitler, complimenting him on his invasion of their country. And not before Lithuanian forces were used to implement the Final Solution, the mass murder of all Jews, despite some faltering steps along that path in Poland before. The Holocaust in essence began in Lithuania. Operation Barbarossa called for special German forces to be used to “liquidate” so-called Communist kommissars and activists behind the front, code for Jews. LAF cells in Lithuania were apprised of this beforehand and took the initiative in carrying it out. Pro-Nazi Lithuanians also drew up lists of local Jews to be murdered when the decisive moment came. Pro-Nazi genealogists in East Prussia made special trips into Lithuania as well to draw up lists of Jews scheduled for murder before the Nazi invasion of the USSR.

At the discussion in Vilnius, Mark Harold kicked things off with a little prepared speech in Lithuanian in which he said the event was not a trial of Kazys Škirpa, which of course it was. Moderator Darius Kuolys read the statement LJC chairwoman Faina Kukliansky sent (see below on this webpage), and Darius Udrys gave an impassioned speech about values, and said the name of the street was at odds with the professed values of the Vilnius municipality under mayor Šimašius.

Historian Antanas Kulakauskas said that while there is controversy over the extent of Škirpa’s complicity in Holocaust crimes, the leader of an organization is politically responsible for the actions of that organization, and there is no dispute the LAF murdered Jews. While one or another person may not like a certain street name, this case was different in being offensive to a large portion of the population. “The only way to keep the street name would be if some facts came to light showing Škirpa was some sort of Raoul Wallenberg and saved Jews. But I don’t expect that to happen,” Kulakauskas said.

Historian Alfredas Rukšėnas gave a rather technical presentation on what historians still need to do to firmly establish Škirpa’s complicity in crimes against humanity. He said there were four points in the development of the Holocaust according to which Škirpa’s actions need to be judged: identifying Jews, isolating Jews, stealing Jewish property and murdering Jews.

A young historian who specializes in studies of Škirpa gave an interesting presentation about his impressions formed from his studies. He said Škirpa’s name kept coming up in connection with Nazi and Wehrmacht people who were actually opposed to Hitler, including those who actively sought to overthrow him. Was Škirpa fighting for change “from within” in Nazi Germany? If Škirpa was trying to effect change in Nazi Germany, to somehow replace “bad Nazis” with “good Nazis,” why did he drag the entire country of Lithuania into it? And if so, were the Nazis in Lithuanian the supposed “good Nazis?” While some claim the initial pogroms in Slobodka, Kaunas, were somehow staged by “Voldemarists” rather than the LAF (against all evidence to the contrary), what happened in Lithuania provided a propaganda bonanza for those in the Third Reich who wanted all Jews in Europe murdered: a seemingly spontaneous bloody uprising against Jews by locals.

Kaunas journalist Vidmantas Valiušaitis, who was the main voice at Kaunas City Hall commemoration of Provisional Government acting prime minister Juozas Ambrazevičius several years ago, spoke in defense of Kazys Škirpa by reading from a variety of sources. He began with a reading of the double genocide resolution adopted by several states in 2008 and known as the Prague declaration, which calls for a combined commemoration of Holocaust victims and victims of Communism. He then read a Lithuanian translation of what he said was a diplomatic cable from US embassy Moscow to Washington in 1940 or 1941 about the situation in Lithuania, including the formation of “anti-Soviet cells.” Later he read a June 25, 1941, article from the Lithuanian newspaper Draugas based in Chicago, claiming Škirpa’s latest statement then was that “Jews will not be persecuted” in his Lithuania. Valiušaitis said he had scoured Škirpa correspondence and writings and hadn’t found any evidence of anti-Semitism. During his personal comments he said Lithuanians and Jews had chosen opposite sides during World War II and occupied positions on opposite poles.

Litvak author Sergey Kanovich read a letter by his father, also a writer who now lives in Israel, condemning the street name. The younger Kanovich apologized there was even discussion about the subject. He read his essay “For Our Freedom and Yours,” translated below, and wondered when the people and institutions of Lithuania would honor the victims rather than the perpetrators.

Several other historians also spoke and expressed a variety of opinions about Škirpa, after which a podium with microphone was set up for public comment. This is when the fireworks began. Commentators had been required to sign up beforehand for one minute of free speech each, but this appeared to have been abandoned. The first speaker said he had Jewish friends and wanted the street name changed. The second spoke about how Jews had murdered and exiled members of his family. He turned on city councillor Mark Harold and said: “Brexit is done. You are now an illegal alien in Lithuania.” The ad hominem attacks continued with attacks on Holocaust author Rūta Vanagaitė, who was present in the audience. She was accused of being financed by the Kremlin to write her best-selling book on the Holocaust in Lithuania. Other speakers attacked Efraim Zuroff, director of the Simon Wiesenthal Center in Jerusalem. Some attacked the historians on the panel, demanding to know why they hadn’t set up more monuments to Lithuanian freedom fighters. Antanas Burokas introduced himself as a defender of freedom [an official Lithuanian title for people who made extraordinary contributions to the cause of independence from the Soviet Union] and spoke succinctly in favor of keeping the street name and continuing to honor Kazys Škirpa.

One man said there should be more commemorations of Škirpa. Marius Kundrotas introduced himself as a historian and argued that Lithuanian King Mindaugas had killed, sold out the Žemaitijans and done other horrible things but was nonetheless honored for fighting for Lithuania, so why shouldn’t Škirpa be honored that way as well? Of course King Mindaugas never congratulated the leader of a foreign invading army on his occupation of Lithuania, at least not as far as we know.

Comments were in favor of Škirpa and keeping the street name at about a 10:1 ratio. Out of perhaps just over 20 speakers, only one woman spoke, and off-topic. All panelists were male as well. The first speaker attempted to hijack the microphone towards the end of the event but was prevented by strong remonstrations from moderator Darius Kuolys. Councillor Harold had the final word, which he more or less fumbled with a series of personal declarations of his hatred of Communism and Stalinism, a clear deviation from the topic at hand. Kuolys concluded by saying that while many had attacked the very idea of the discussion, it was a useful exercise in public participation and democracy. He thanked the speakers and the audience for listening and speaking.

The historical and personal views presented above are solely those of the author and do not in any way represent the official positions, stated or unstated, held by the Lithuanian Jewish Community, its leadership, staff or member organizations, or their respective membership bodies.