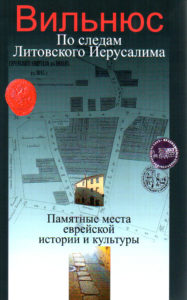 The Lithuanian Jewish Community this week hosted the launch of the second corrected and expanded edition of Irina Guzenberg and Genrikh Agranovsky’s book in Russian about Jewish Vilna.

The new edition has been reorganized with a new structure and better indices of names and sites.

Author Irina Guzenberg has done exhaustive research to provide authentic street names from the period and the book is graced with attractive period photographs. Much of the history is unknown to modern residents of the Lithuanian capital, which was not very Lithuanian before the 1950s. Before the war one heard Yiddish, Polish and Russian spoken on the street.

Although much of the damage done to Vilnius is blamed on the war, author and Vilnius resident Pranas Morkus, speaking at the book launch, said he still remembers many valuable buildings were blown up after the war.

Authors Irina Guzenberg and Genrikh Agranovsky have spent decades researching every nook and cranny of Vilnius. Guzenberg said she finds it painful whenever the city changes traditional street names, and added she has been trying without result to convince city hall of this as well.

Several years ago Guzenberg published a smaller pocket-sized version of the book for use by tourists and visitors in English and Lithuanian as well as Russian. Many of her books are for sale in the foyer of the branch of the Vilna Gaon State Jewish Library located right next to the Lithuanian Jewish Community at Pylimo street no. 4 in Vilnius.