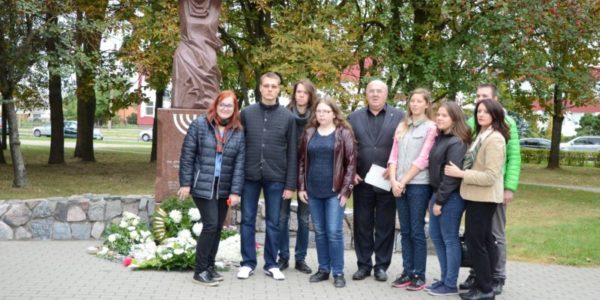 Marking the Day of Remembrance of the Genocide of the Jews of Lithuania, in Panevėžys they remembered the Jews who lived here and those who saved them as well as the victims.

September 23 wasn’t chosen arbitrarily. This was the day in 1943 when the Vilnius ghetto was liquidated. Some of the residents were shot, while others were taken to concentration camps.

Panevėžys Jewish Community chairman Gennady Kofman noted 75 years had passed since the first group of Jews were shot in the city and the arrests began. Fifty-seven Jews were arrested and then murdered in the Staniūnai Forest.

In July of 1941 a Jewish ghetto was set up in Panevėžys. Kofman said over its 42 days of existence, more than 14,000 Jews “passed through” the ghetto. The Community said initially there were 4,423 inmates. When the ghetto was liquidated, all the Jews were shot: 8,000 in Kurganava Forest and 4,500 in Žalioji Forest. Ninety-five percent of Jews of Panevėžys were murdered during the war.